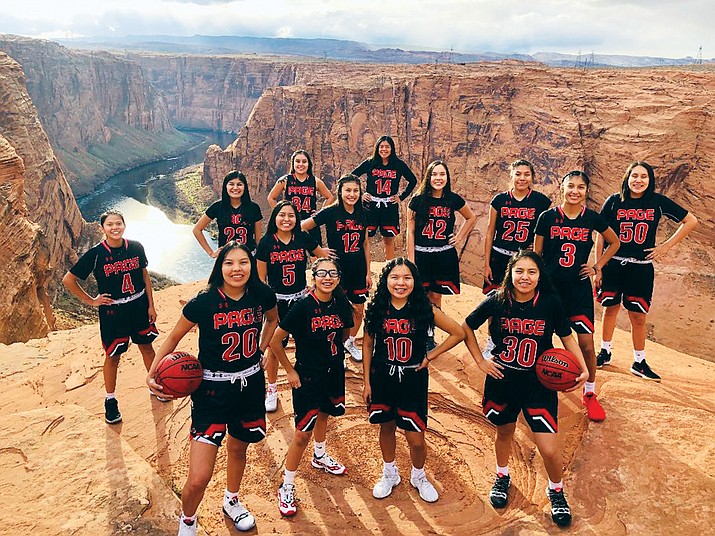 PAGE, Ariz. — There is nothing better than winning back-to-back state championships in one of the toughest interscholastic athletic conferences in Arizona.

In their quest to the championship, the Lady Sand Devils (27-4) knocked off No. 15 Florence 55-24 in the second round on Feb 15. They narrowly defeated their Highway 89 rivals No. 7 Tuba City High School Lady Warriors 42-43 in the quarterfinals on Feb. 18 and they rolled over No. 6 Winslow High School Lady Bulldogs 43-26 in the semifinals Feb. 22.

The team is led by head basketball coach Ryan Whitehorse, who has coached the Lady Sand Devils for the last three seasons. He was happy for the win despite some obstacles and challenges they faced throughout the season.

“It was good. It was an emotional rollercoaster for us this season. We had a bunch of obstacles to overcome as a team, [like] one of our seniors [Meagan Fuller] going down in the regional tournament with an injury and not being able to have her for the rest of the season,” he said. “It was something we had to overcome as a team, she broke one of her fingers — so she was done for the season. She was our emotional leader for the team.”

He said the challenges strengthened the team.

“We had so many things that could go wrong that went wrong. We grew and the girls got better week-to-week,” he added.

He explained they have a lot of sophomore players that stepped up this season.

“[They all] came together to be a phenomenal team. We have girls that could score 20 points a night but sometimes it wasn’t their job, sometimes their job was a little bit different,” he said. “On any given night, any one of them could step up.”

He said no one scored in double figures during the championship game and said every one contributed five or six points here and there for balanced scoring.

The team loses four seniors this year to graduation: Meagan Fuller, Mikala Benally, Amy Yellowman and Myka Taliman. Despite these losses, they have a strong sophomore group.

“After the game yesterday, I told the girls, ‘Why not? Why not go for another state championship run next year?’” he said. “I believe we can be competitive again next year, it’s going to take a lot of hard work and discipline during the off season.”

He explained that last year they lost two great post players to graduation who had four years of varsity experience. He said some people thought the team would not be in the running this year, but they proved them wrong.

He said the toughest game of the post season was against the Tuba City Lady Warriors, who they barely beat by one point in the quarterfinals of the state tournament.

“We played them two times prior to the state tournament. We always tell the girls, ‘It’s tough to beat a team two times, let alone three times,’” he said. “They [Tuba City] came ready to play and we know them very well. Coach Kim Williams does a phenomenal job with their program.”

He said they learned a lot about that particular game against Tuba City.

Whitehorse said it was a great season.

“Winning it a second time was just very emotional for all of us as a coaching staff and also for the whole team,” he said referring to the seniors they will be losing this year. “They’re going to do great things in the future. I had them for three years; it’s amazing to see them grow as players and also as individuals — I wish them the best.”

Levi Tappan, mayor of Page and a 1998 alumnus, congratulated the team.

“Page High School produces champions; we also had three state champion wrestlers,” he said. “Way to go girls, you made our hometown proud.”

The coaching staff includes Whitehorse, assistant coaches Jenner David, who has been with the program for 30 years and plans to retire this year, Darlisa Tsinnie and Charlotte Nockideneh.

The entire team roster of 14 players consists of Navajo tribal members from the nearby Navajo communities of Lechee, Coppermine, Gap/Bodaway, Cedar Ridge, Bitter Springs, Kaibeto and other outlying areas of Page.