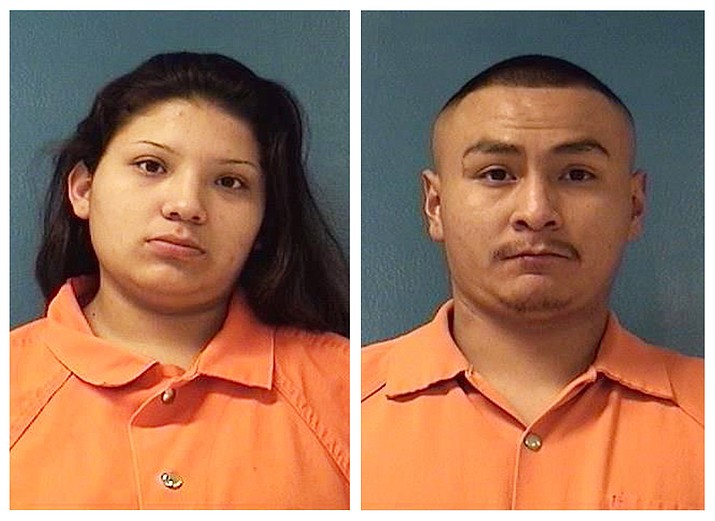 This combination of a December 8, 2018 file booking photos providing by McKinley County Adult Detention Center shows Shayanne Nelson, left, and Tyrell Bitsilly. Nelson, 19, the teenage mother of an infant girl who police say was shot in the face at a New Mexico motel in December, may testify against her boyfriend at his child abuse trial. (McKinley County Adult Detention Center via AP, File)

GALLUP, N.M. (AP) — The teenage mother of an infant girl who was shot in the face at a New Mexico motel pleaded guilty to child abuse and is required to testify against her boyfriend as part of her plea agreement.

Shayanne Nelson, now 19, initially told police that she and Tyrell Bitsilly, 21, were in a shower at the motel in December when they heard a gunshot.

She ran out to discover her daughter on the bed and bleeding from the face, The Gallup Independent reports .

Nelson said then that her 3-year-old boy found a gun and accidentally shot her infant daughter.

Prosecutors, however, believe Bitsilly placed the revolver, which was loaded and cocked, on the toilet. He has also been charged with child abuse.

Prosecutors said Nelson knew Bitsilly had the gun, which authorities described as an uncommon model manufactured in the 1950s. But she initially told police a previous occupant had left the gun in the motel room.

Nelson could face up to three years in prison for her guilty plea on Friday.

Shanna Nelson, 39, said her sister Shayanne had been in an abusive relationship with Bitsilly and previously tried to break up with him.

She said her sister, a member of the Navajo Nation, had struggled to find a permanent home after the father of the children died in a car accident in 2018.

"I just thank God that this child is in the condition that she's in now," Rhoads said. "It's almost a miracle."

Rhoads said the baby is permanently deaf in her left ear and paralyzed on the left side of her face.