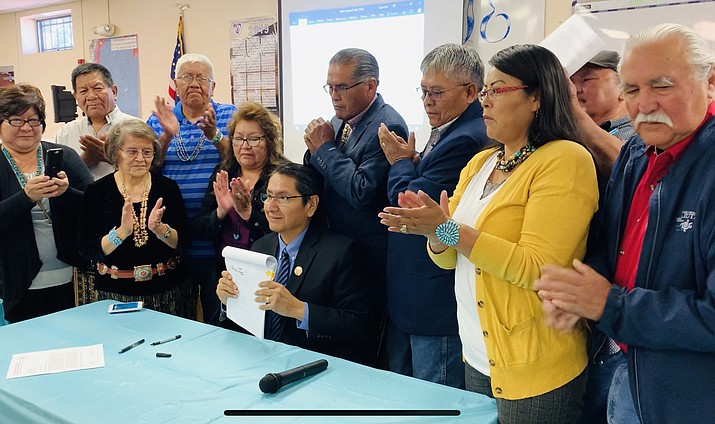 Nez was joined by local officials from the Western Navajo Agency as he signed the resolution to provide adequate funding for local officials for the remainder of the current fiscal year. The funding request sponsored by Council Delegate Mark Freeland was unanimously approved by the 24th Navajo Nation Council during a special session held June 5.

“Working with the Navajo Nation Council on supplemental funding is one approach to ensure our local officials are compensated for the important work they do for their communities, but we also need to be mindful of the looming reduced revenue for the Navajo Nation for the upcoming fiscal year, as we budget for services not only for the central government but for our local governments as well,” Nez said.

Nez and Vice President Myron Lizer have directed all division directors to make certain they account for all necessary services for the new budget year that begins on October 1 — this includes fully funding stipends for local officials to eliminate the need for supplement funding requests during the fiscal year.

“We appreciate the 24th Navajo Nation Council’s action in supporting supplemental funding for our local officials. We look forward to working with the Council on producing a fiscally responsible budget for FY2020 that provides direct services for our Navajo people while also reducing unnecessary spending,” Lizer stated.

During a report to the Council’s Budget and Finance Committee May 14, Nez and Lizer stated in a letter that they would support the supplement funding request for local officials.

They also informed the committee that the Executive Branch is reviewing the operations of each division and department to identify duplicate services, stagnant federal dollars, excessive spending, and other cost-saving measures, including reducing the amount of travel for employees for conferences, summits, and meetings that occur off of the Navajo Nation.

“Working together with the Legislative and Judicial Branches, we can be more fiscally responsible and innovative in the way we develop our respective budgets to avoid layoffs while ensuring that direct services for our youth, elders, and all communities are met,” Nez said.

Council Delegate Paul Begay, who represents the Coppermine community as a member of the 24th Navajo Nation Council, also joined Nez for the signing of the resolution on June 15, and offered his appreciation to the local officials for their dedication and hard work for local community members.

The Office of the President and Vice President thanks the Coppermine Chapter, the Western Navajo Agency, and the 24th Navajo Nation Council for their support and partnership.