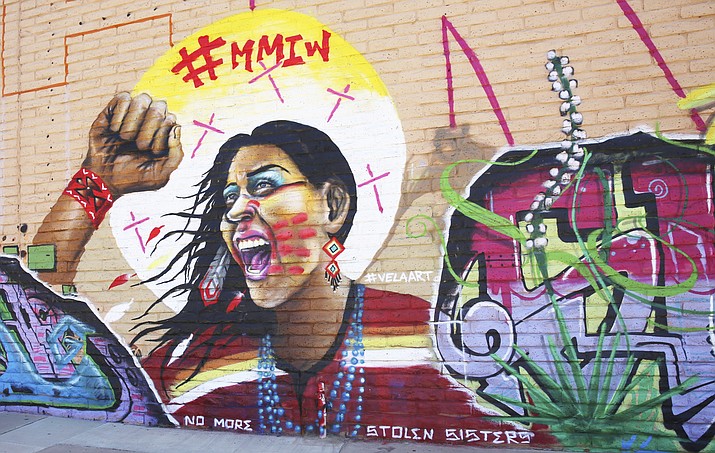 LAS CRUCES, N.M. (AP) — A new mural in southern New Mexico seeks to honor missing and slain Native Americans amid a nationwide push to bring more attention to the issue.

The work is part of a large-scale mural wrapping around the entirety of the Cruces Creatives building. In the mural, a Native American woman stands in front with her fist raised. She’s screaming and the words below say: “NO MORE STOLEN SISTERS!”

“The news gets turned off and Facebook gets put down and turned off, and those issues kind of disappear, and everything that comes with it,” Velazquez said. “Having that piece up there, and why we sponsored it, is because you can’t really turn off a mural. It’s there every day and every night.”

The legislation is named Savanna’s Act for 22-year-old Savanna LaFontaine-Greywind, whose body was found in a North Dakota river in 2017.

The bill was unanimously approved in the U.S. Senate last year but died in the House.

Velazquez said the mural also honors missing indigenous Mexican women. “Art is medicine to people of color. I think aerosol art is a healing method, rather than a criminalizing method,” he said.

Earlier this year, New Mexico Gov. Michelle Lujan Grisham signed a bill to develop a task force to investigate the issue of missing and slain indigenous women in the state.