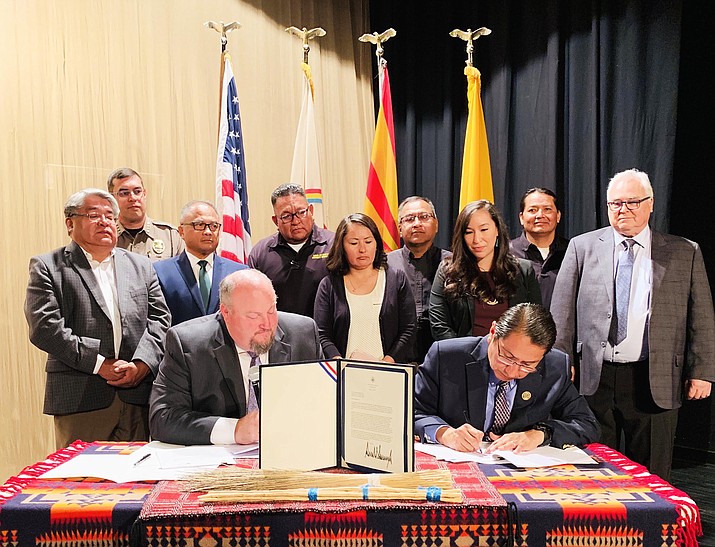 The agreement between the Navajo Nation and FEMA is a major step forward in the Nation’s effort to secure the reimbursement of emergency funds expended in the month of February because of severe snowstorms that impacted many Navajo communities.

On May 21, Nez and Vice President Myron Lizer were informed by FEMA that President Donald Trump granted the Major Disaster Declaration for the Navajo Nation, which requires the signing of the agreement that includes various provisions to guide the reimbursement process in accordance with the Robert T. Stafford Disaster Relief and Emergency Assistance Act.

“Vice President Lizer and I are very thankful to all of the Navajo Nation Department of Emergency Management, divisions and programs, chapters, Council members, our congressional delegation, volunteers and many others who were proactive and worked together to collect and document the funds and resources that were used during the emergency. As you know, we devoted many of our resources to helping the elderly people in remote areas — much of which was conducted by the Nation’s Community Health Representatives under the Division of Social Work,” Nez stated.

On Feb. 19, Nez signed an emergency declaration for the Navajo Nation based on forecasted storms that eventually brought significant snowfall to many Navajo communities. Throughout the emergency response efforts, Nez and Lizer held numerous meetings and used Public Service Announcements, social media and other resources to continuously remind chapters, divisions, and others to document all expenses.

On March 5, Lizer personally delivered a letter to U.S. Vice President Mike Pence stating, “We respectfully ask for support from the Trump-Pence Administration to assist the Navajo Nation to secure reimbursements for financial resources used during this period. To that end, the Trump-Pence Administration is kindly asked to concur with the Navajo Nation’s declaration of emergency to facilitate the reimbursement process.”

“This was truly a collaborative effort and it’s due to the proactive approach that was taken to declare an emergency, to keep the public and employees informed, and to constantly tell our staff to account for all expenses incurred during the emergency period,” Lizer said.

The Nez-Lizer Administration will continue working with FEMA on the reimbursement process that includes a recovery scope meeting, submittal of damage inventory, site inspection, internal financial procedures, and more.