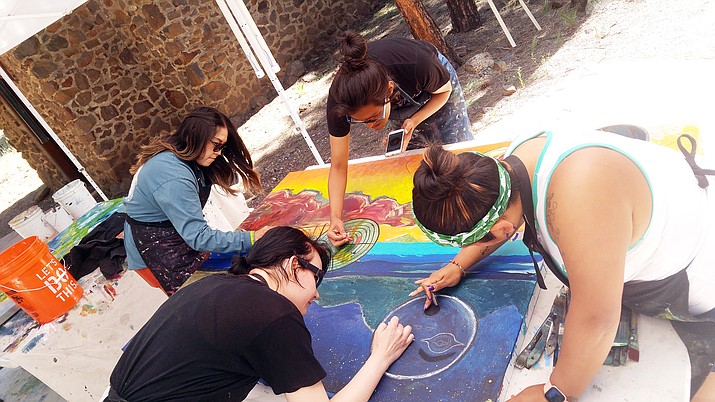 The first cohort of students at the Namingha Institute at the Museum of Northern Arizona June 14 collaborate on a painting that shows different tribal and cultural influences. (Kevin Moriarty/NHO)

FLAGSTAFF, Ariz. — The first Namingha Institute was unveiled at the Museum of Northern Arizona June 10-15, made possible after years of work and a special endowment by Phil Smith, a supporter of the Namingha family of artists and a collector of their work.

Smith gave his extensive collection to the museum, along with the endowment to create a “challenging and stimulating residency for a small number of promising young artists.”

This year, the students selected were all Native American, though they did not have to be.

“The institute is expected to grow,” a press release said. “It started out this year with five students, selected from a competitive range of applications that came in from the U.S. and Canada.

The museum said the residency is organized to offer the students a wide range of art experience and materials, and they were encouraged to explore different media to broaden their artistic horizons.

Darvin Descheny, a coordinator for the program, said in the first few days the students had been expressing their cultural arts with each other and while at first they were going to work individual canvasses, it soon became clear the students wanted to work together.

“Baje was able to provide some larger canvasses,” Descheny said. “The institute kinda turned to a collaborative effort between multi-tribal students and their artistic ambitions.”

Descheny said while he was not an actual student in the program, he is a painter and got to be involved as well.

“It was really a collaborative effort between the coordinators and students,” he said. “I think this institute is important because artists don’t only need each other but they need a cumulative collection of weavers, of basket makers, of painters. I feel like this institute brings together a lot of multi-tribal students and artists. It just opens a lot of new horizons and I think that is what the art world really needs.”

Descheny points out galleries are a place where Native people can start to have influence.

“I think that Native people as a whole can start to break that barrier (of the galleries being mostly white) and that they’re actually making art that changes social movements,” he said.

But Descheny also thinks it is important that the institute was not only open to Native people because differing voices and ideas are needed.

“This wasn’t exactly indigenous based, but I do think it’s important to have people who are non-indigenous to bring in their opinion as well or their techniques,” he said. “Because I think the world as it is needs a lot more diversity, especially in this political and social climate, I think that’s important.”

“We do have students who are both really traditional and really urban,” he said. “All those traits are great to have within this little community that we have created. This institute is a really unique opportunity for students from across the country to come together. I get emotional looking at these paintings because they do represent a lot of cultures and backgrounds.”

Honie is 24 from Round Rock, Arizona. He is a full-time student in the Bachelor of Fine Arts Program at Diné College with a focus on photography, graphic design and painting.

“I guess, basically, art’s been my whole life,” Honie said. “I’ve been doing it since I was young and I want it to become a professional career.”

Honie was a student who didn’t initially want to apply for the institute, but one of his instructors encouraged him to take the opportunity.

Honie said his purpose at the institute was to grow as an artist and learn from other people and they could learn from him.

“I want to take this back to the reservation and help kids or elders or people who are disabled,” Honie said. “I’m showcasing my work as art therapy, using that platform for mental health and for people to be able to paint, or draw, or sketch or sculpt.”

By mental health, Honie means people who suffer from trauma, depression, grief, anxiety, anything that has to do with the mentality of the brain, Honie explains.

“I’m focusing more on working with people… being here I’ve been able to open up with people and just be vulnerable,” Honie said. “That’s what I like most about these people. I can be comfortable and be myself. And I think that’s how we all are. We have made a bond being here and it’s a great feeling being here.”

As for getting to work with master artist Baje Whitethorne Sr., Honie had high praise.

“It’s like, to me he’s like Yoda, the master of everything,” Honie said. “Leaning from him, I’ve learned so much within the past few days. It’s been really great. Him being here and teaching us and taking the time to show us what he does and teaching us his skills, it’s an amazing feeling to have someone do that. There’s not many people who would do that.”

In fact, for Honie, Whitethorne mirrors the same feeling he gets from his instructor at school who was the person who encouraged him to apply for the institute in the first place.

“Just being able to create art, no rules and happy mistakes,” Honie said.

See next week’s Navajo-Hopi Observer for part two of this series with interviews to include Baje Whitethorne Sr. and other students from the first Namingha Institute.