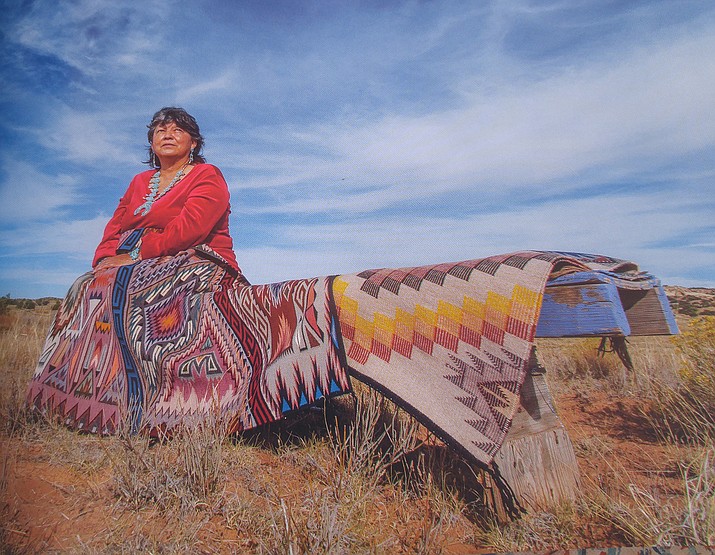 Florence Manygoats is one of the many men and women featured in 'Spider Women's Children: Navajo Weavers Today'. She is from the White Mesa area of Tonalea, Arizona. The striking colors in Florence Manygoats rugs accentuate the colors of her landscape. (Photo by Joe Coca/Thrums Books)

A unique book, Pete explained, because most books written about Navajo weavers are told by someone who is not Navajo, even instructional pamphlets are not always written by a weaver, never mind a Navajo one. That is one thing that makes ‘Spider Woman’s Children,’ a different book right from the beginning.

“This is the first book that has been written by Navajo weavers about Navajo weavers,” Pete said. “We didn’t need to use translators. We’ve all had sort of the same experience. Everything that the weavers talked to us about — if they wanted to speak in English, we spoke English, if they wanted to speak in Navajo, we spoke in Navajo — nothing got lost in translation.”

Pete said in addition, they spoke to so many weavers who have weaved for generations and some spoke intimately about their processes and they did not want everything included in the book. Pete and Ornelas honored their wishes.

“I think we have to be ethical, too, about what we print,” Pete said. “There’s a lot more that is out there, there are a lot more weavers. This is just the tip. But this book gives you the true voice. It gives names. It gives the photos of faces to people who realize that weaving is still going on.”

Pete said shards of weaving was discovered in the mid-1400s in Canyon de Chelly. She said anthropologists who came to the Navajo Nation did not speak Navajo and they perpetuated the idea that Navajo people learned how to weave from the Spanish or the Pueblos.

“I really think Navajo weavers, they’ve always woven,” Pete said. “And because we lived in proximity to the Pueblos, it’s true that when there are different cultures living right next to each other, they kind of have the same method. But I think weaving is still the same on the Navajo Nation as it is in Norway and Sweden, Laos and Afghanistan. All over the world there is weaving. There’s the plain weave. People weave baskets, fiber, all kinds of stuff. It’s not true that Navajo people copied. We’ve always had it.”

Pete said when the Conquistador’s brought over the sheep, it’s true that the Navajo people started weaving with wool, but before then, they were weaving with plants.

“I really think history did us a disservice by calling us cultural borrowers,” Pete said. “They repeated it enough times that people think it’s true.” 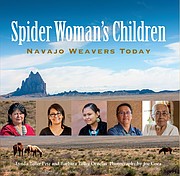 The book delves into the history of three elder weavers who had emotional conversations about what they remembered with Ornelas and Pete.

“They all talked about the livestock reduction and why they couldn’t go to school because the Japanese internment camps came on,” Pete said. “The government shut down those schools so they could collect money on the internment camps. And leaving a whole generation of Navajo people with no schooling. There’s so much there. There was so much heartbreak.”

But Pete doesn’t think the book is a sad one. In fact, those elders taught their kids, they taught their grandkids how to weave.

“The whole thing about, ‘Oh weaving is dying out.’ I think that was invented by people trying to sell rugs,” Pete said.

The books that have been published, do the Navajo weavers a disservice, Pete said.

“There’s book out there explaining the designs, what the designs mean. I think a lot of that is made up,” Pete said. “When we were talking to the weavers, we would talk about their styles and the designs they were using. A lot of them just used the same designs that had been in their families for years. It only has meaning to them. When they sell their pieces, they may tell the story to the buyer, but a lot of them didn’t have universal meaning.”

One of the explanations given by sellers is something called the spirit line that is said to be in every Navajo weaving. But, Pete said, in their travels for the book and speaking to many weavers, they found that not all of them put that line in.

“They do different things,” Pete said. “Some put a little piece of red wool in the middle to denote the blood line of the weaving family. Some put a little opening at the bottom and they call that the doorway. Every weaving family is different. And all the stuff, the books that are out there written by non-Natives, make it seem as if Navajo weaving is universal across the board. And I think that does us weavers a disservice as well.”

Ornelas and Pete hope the book debunks a lot of stereotypes that are put on Navajo weavers, but not by being preachy, more by telling the stories of the weavers themselves and showing their work.

The book is not only about elder weavers. It also shows weaving today and how the weaving world has been passed down to future generations and Pete explained that weavers today, in the classes that she and Ornelas teach, are in their 30s and 40s and not one of them answer a question about why they want to weave as wanting to sell their work and make money.

As weaving moves forward and is less tied to trading posts, with weavers in urban areas, Pete is excited about the future.

“There’s a bigger art movement that is happening to Native people,” Pete said. “I see these young fashion designers, silver smiths and they’re doing so much more… but I think it’s beautiful.”

Pete explained that when Navajos first started weaving, it was very simplistic and functional. But when the Navajos came back from Bosque Redondo, they were influenced by the trading post people — in the heyday, there were about 271 trading posts, all of which dealt with Navajo rugs. Now there are about 10 that make a profit.

“All those styles that were forced on weavers to make, their grandchildren are now in control of their weaving lives,” Pete said. “They are free to do whatever they want. It is such an exciting time, in the Navajo weaving world, this is an exciting time to see what the new weavers are going to do.”

Pete sees a future when books are written, movies are made and articles are being written, that weavers will be identified and not anonymous, as they are in many books about weaving today.

“No more of this unknown weaver, or unknown weaving being found in an attic on the East Coast, probably taken by the gallery people,” Pete said. “I think we are taking our power back. We are celebrating our existence.”

The book is published by Thrums Books based in Loveland, Colorado.