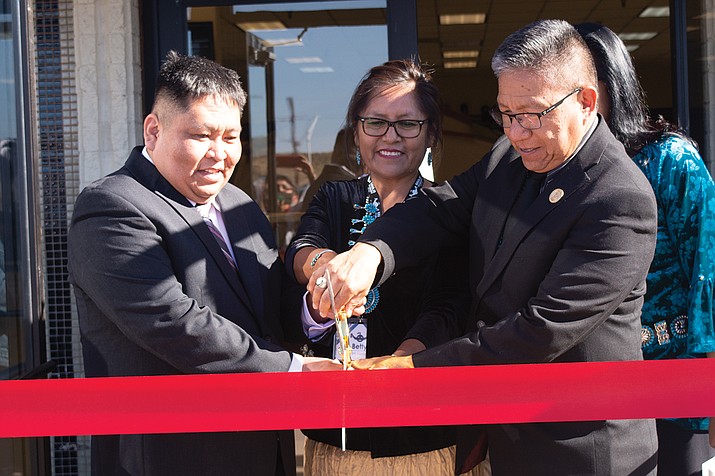 Festivities began at 8 a.m., with colors posted by the Tonalea Veterans Organization, led by Commander Leslie Deal. Guest speakers addressed the crowd before the doors were officially opened for business after the 9 a.m. ribbon cutting ceremony.

The high standards maintained by the tribal enterprise ensures the quality and origin of the items, he noted, adding that everything offered is authentic Navajo.

In addition to the Navajo items, the stores also provide raw materials to assist artisans with the creation of these quality, one-of-a-kind pieces that are sought after by customers the world over, he said.

“The Tuba City location started last year when we opened a pop-up shop for the holidays. Today, we get to open a new store for Navajo Arts and Crafts Enterprise,” Muskett said.

The new store boasts 9,000 square feet of retail store space, 60 percent of which is allotted to apparel and clothing from Horned Moon Apparel. A section at the front of the store was for raw materials. The new delegated store manager is Betty Gordy, who previously operated the Cameron location.

NACE Board of Directors Chairman Ben Bennett provided remarks on behalf of the board and said the new store will complement Tuba City’s growth in the realm of economic development.

“Tuba City is leading by example, they are collecting their own taxes, collecting revenue. This (new store) is definitely going to put money back in their pocket as well,” he said.

Since taking office in January, the Nez-Lizer administration has been pushing the “Buy Navajo, Buy Local” initiative, he added, noting that Second Lady Dottie Lizer is also a tribal business owner.

“We hope that we are raising up and inspiring the next generation of entrepreneurs so we can build more shopping centers just like this one,” he said.

“We have more opportunities for your Navajo dollar to stay local,” he said.

“Seventy-eight years ago, NACE was established,” he said. “Back then, it was known as Navajo Arts and Crafts Guild. Our people, our artists, are the ones who make these jewelry and crafts.

“There’s about 300 people, artisans, that are making jewelry and crafts for NACE,” he added.

Begay said NACE also has 10 Navajo-owned businesses, such as Yanabah Tea, working with the tribal enterprise as vendors.

“Twelve years ago, that was the last time NACE opened a store and that was in Shiprock. Here, this was only a small store, and in Crownpoint, too. It’s really growing. We encourage you to shop Navajo,” he said.

Navajo Nation Shopping Centers, Inc. Board of Directors Chairman Ken Cooper spoke about the excitement of opening a new store in Tuba City.

“This is a beautiful location. At Navajo Nation Shopping Center, Inc., we are looking at this particular location and facility, and we’re changing our capital improvement plan to refresh the exterior,” he said. “Tuba City is number one on the list.”

The beautification initiative is slated for the next 60 days he added, noting that the Kayenta shopping center is next on the list.

“Navajo Nation Shopping Center Inc. is looking at forming an even more progressive relationship with NACE. We’re excited about that and looking forward to it because small business is one of the fibers of the American economy,” he said.

Cooper said he is pro-employee and a proponent of the Navajo Nation Preference in Employment Act.

“I believe in treating employees with dignity and respect. Everywhere I go, where I see Navajo employees working, it’s exciting to me,” he said.

The new store will provide seven new jobs to the community of Tuba City and countless tax dollars for continued growth and development by the To’Nanees’Dizi Local Government.