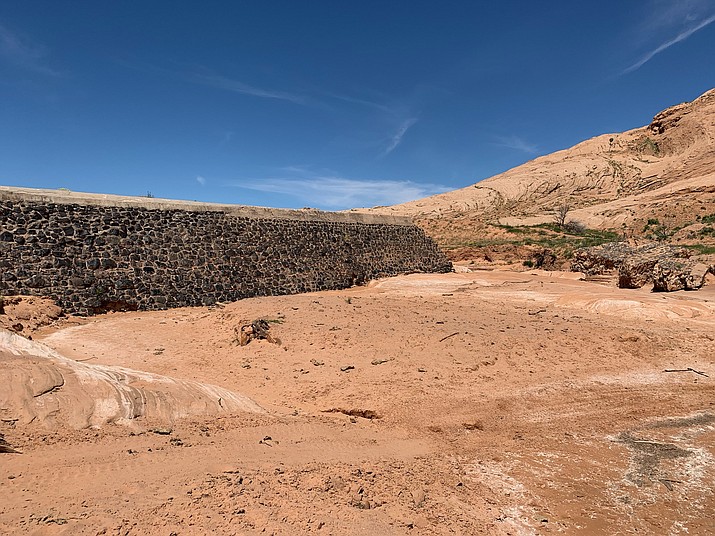 Kayenta community members want to recreate a diversion dam, which will allow the local reservior known as Dry Lake to be refilled and used for irrigation and in future drought situations. (Office of the President and Vice President)

KAYENTA, Ariz. — On June 12, the Navajo Nation president and members of the council met with federal officials and the local community of Kayenta seeking to rebuild the Kayenta diversion dam to revitalize farming for Navajo families.

The dam was built in the early 1950s by residents; however, the dam eventually broke in 2012 because of heavy rainfall.

In August 2017, the Kayenta Chapter finalized an agreement with the Department of the Army, which allows the U.S. Army Corps of Engineers to provide technical assistance to conduct a flood plain study. The study hopes to gather more information about the flow of water, rain and snow runoff and other factors. The study would enable local officials to plan appropriately for water projects and to prevent flooding.

Since then, Delegate Nathaniel Brown and his Legislative District Assistant Renae Hoshnic have advocated for the reconstruction of the diversion dam.

“Rebuilding the Kayenta diversion dam will allow Navajo families in the area to farm once again and to teach our young people about our Navajo way of life and all of the other teachings that our parents and grandparents taught us. Agriculture and farming are also about moving our Nation forward in terms of self-sufficiency and sustainability,” Nez said.

Chief showed the group where heavy rainfall and water flow have caused severe erosion in the fields where he once grew corn and other crops. He also said that the erosion in the area had created safety hazards for residents and livestock.

The community is also in need of the replacement of two bridges along Parrish Creek, which serves many families in the area. Officials with the Western Area Power Administration are also monitoring areas along Parrish Creek to ensure the safety and stability of power lines that provide electricity to several Arizona towns.

Brown commended the Kayenta Farm Board for being instrumental in creating the partnership with the Army Corps of Engineers and in securing funding to rebuild the dam and other projects.

Brown added that Navajo Tribal Utility Authority has also allocated funds and that the Kayenta Farm Board is working to create a community farm with tax revenues levied from the two-percent unhealthy foods and beverages tax, commonly referred to as the “junk food tax,” on the Navajo Nation.

“Right now, we are not capturing the vast amounts of water that flow through our communities, but once we complete the reconstruction of the diversion dam many of our people will benefit immediately and in the long-term,” said Brown, who also thanked Nez for attending Wednesday’s meeting and supporting the community’s efforts.

Local officials stated that once the diversion dam is reconstructed, it will allow the local reservoir known as Dry Lake to be refilled and used for irrigation and in future drought situations. The dam will also allow for water flow management for other communities downstream, rather than having water flow through the communities without capturing any for future use.

Nez said that health and wellness are top priorities for the Nez-Lizer administration. Growing fruits and vegetables locally will improve the health of many families and promote healthy living in the community, according to Nez.

“To push health issues like diabetes and high blood pressure off of our Nation, we need to incorporate farming back into our way of life and pass that knowledge down to future generations. The projects in Kayenta can also serve as a model for other communities,” Nez said.