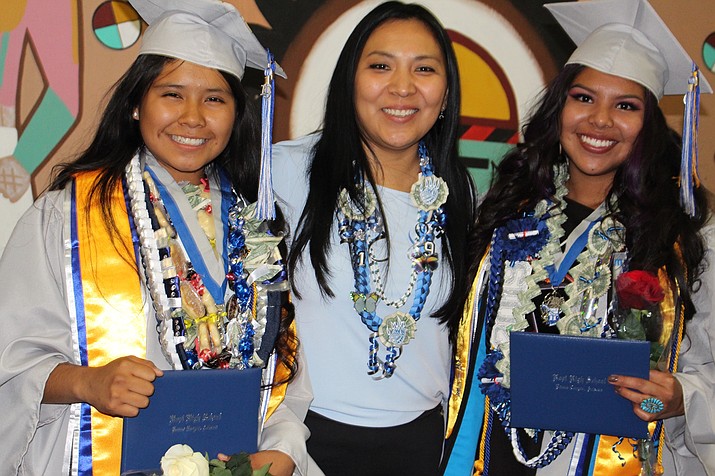 POLACCA, Ariz. — The Hopi community has overcome problems due to uranium mining and the loss of their water by using the knowledge passed down to them for thousands of years, but they must continue to use their ways to protect themselves.

That was the message that keynote speaker Carrie Joseph, a professor of indigenous environmental studies at Northern Arizona University, brought to the graduation ceremony in the gym at Hopi High School May 23.

The celebration came with Hopi High having a 77 percent graduation rate this year, which is its highest in five years. It also tops the Bureau of Indian Education rate of 53 percent and the Northern Arizona Native schools graduation rate of 67 percent.

Joseph, a former science teacher at Hopi High, said, “If you love life, don’t waste time, for time is what life is made up of.” She said the statement is one of her favorite quotes because the Hopi community has no time to waste.

“Our community, our lives, our future is being challenged in various facets of our lives; you could see that we are repeating events that have already occurred in the past. You know our region, our ancestral homelands, were targeted by mining industries because of our rich resources in the area,” she said. 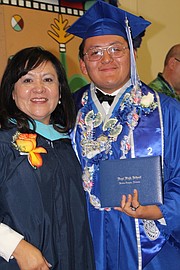 “We never went into leasing agreements. Yet we have to be aware that 13 million tons of ore was produced from multiple sites around us in every direction. Today, there are remnants of this activity with over 520 abandoned uranium mine sites and 1,100 features and inactive mill processing sites across the way,” she said.

Joseph said elders were against coal mining, but it became a reality when there was an agreement to lease coal, which was used to produce electricity for major metropolitan areas in Nevada, California and Phoenix.

In the process, 45 billion gallons of pristine groundwater was gone in 45 years. Joseph said that could have provided the Hopi community with water for the next 300 years.

Yet many Hopi homes, many from families of Hopi communities, don’t have direct access to running water or electricity and over time they have become reliant on coal revenues that maintained 80 percent of the Hopi economy.

“Today, we’re forced to go into water rights negotiations with the state of Arizona to secure our water rights for eternity. This is the state that has been developing water rights and projects since the early 1920s. Society, corporate interests, developers, states are literally fighting for water in the court of law, and now they come to us,” she said.

Joseph told the Hopi High graduates that these are examples of how colonization has impacted every facet of Hopi life. She said it has defined how things are done. 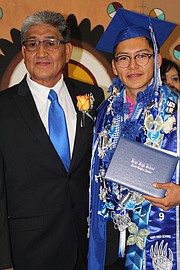 Rick Baker, coach and emcee, with his son, Steven, who graduated this year. (Stan Bindell/NHO)

Joseph said the answer to these challenges are in their history, in their ways of knowing, in the knowledge that has been passed down thousands of years.

“Because our ways of knowing, just like the knowledge of other indigenous people, has withstood the ultimate scientific review process because we are still here. And our ways are going to protect us, and save the world,” she said. “For example, they’re already turning to our seeds to answer food shortage challenges in the future because the strains within those seeds over many years of practice have resilience to climate, drought, with the ability to grow with limited water.”

Joseph said there is a large movement in Indian country and across the globe where people are reclaiming who they are by revitalizing what knowledge they have left. Some have had to turn to written documents because the ancient knowledge and stories have been lost with their elders.

“This movement is being led by young people like yourself. So, when you let the dust settle, I want you to ask yourself, ‘What do you feel in your heart that you need to protect?’ Because we are not here just to live day to day lives. We’re alive to fulfill our life’s purpose by making a difference. Much like our Hisatsinom did for us. There was a reason why Maasaw instructed our people to settle here,” she said.

Rick Baker, serving as the emcee of graduation, said Joseph had a good message of investing in the future by protecting the environment.

“We need people like Joseph to come back and fight for you,” he said.

Joseph told the graduates that it is up to them to understand how to weave this knowledge with the modern ways including the tools and knowledge they have gained along the way.

“We need every kind of discipline there is. So, when you start to make baby steps to get to your dreams by making a goal day to day and week to week, when you begin to pay attention to what’s going on around you, if you pray for guidance by acknowledging our caretakers, then you will start to see that those baby steps will lead to setting new goals,” Joseph said. “Then you will start to be consistent in your actions and your dreams will become a reality.”

“When that happens, remember to reach out to those behind you, be humble, kind and respectful of people around you,” she said.

“To all the families and community out there, congratulations this is your day, too,” Joseph said. “From fundraising events for school functions, driving to town for prom supplies, attending events out of town, supporting your students with cultural duties, and just encouraging your student to be the best they could. The day is here. And last but not least — to the good-looking, vibrant, group in the front, the reason we’re all here today. Congratulations class of 2019.”

Joseph told the graduates that those long afternoons at school, late nights studying for exams, for some, the long commutes to and from school, balancing school with cultural obligations that they have to their village and family.

“Yes, you’ve earned your place in line, earned the credits, you earned those seats. Today we honor you and your accomplishments,” she said.

Joseph recounted how she had served as National Honor Society advisor while teaching at Hopi High and served as one of the advisors for the class of 2010. Immediately after leaving Hopi High, she learned that she had been accepted into one of the nation’s world-renowned programs at the University of Arizona. Her plan was to stay there two to three years for her master’s and then come back to help the tribe, but the opportunity and encouragement was there, so she stayed for a doctorate.

“One person that was not happy that we were staying was my daughter. Some of you in the audience are her old classmates. I want to personally send a shout out to my daughter, Kara, who I started this higher education journey with many years ago. You sacrificed just as much and are my definition of resilience. To Gary, who came into our lives at the right time, who helped to raise my daughter and held down the house when I was a mess, who was always there to support, encourage and bring laughter to our lives. And my foundation my family, isyam, nuvangyam, my grandparents and parents, extended family,” she said.

Salutatorian Jenna Claw had a moment of silence for her father and grandfather who have passed on. She thanked the teachers and school staff for their support.

“I am standing up here today because of my family. They pushed me to get up in the morning They were the main source pushing me to do my best,” she said.

Claw thanked her classmates for the memories.

“We did it guys. I hope we all go on to better things,” she said.

Hopi Vice Chairman Clark Tenakhongva presented Claw with the salutatorian award saying that education has always been a priority to him. He thanked teachers and parents for their involvement in education. He said the high school can set high standards, have the most dedicated teachers and best parents, but the students still have to do the hard work.

Valedictorian Chan Lim said he knows he became known as the class clown. He recounted coming to Hopi in 2008 from South Korea when he knew zero English. He credited classmate Steven Baker with becoming his first friend and teaching him appropriate Hopi words. Lim thanked the First Baptist Church, his family and friends for their support.

Lim joked that he would thank his girlfriend, if he had one.

On a more serious note, he thanked Hopi for not discriminating against him.

Hopi Chairman Timothy Nuvangyaoma presented Lim with the salutatorian award, praising him for his many talents including learning the piano at an early age and also playing the guitar and drums.

Hopi High Principal Lynn Fredericks said this graduation was a major source of pride since she knew many of the graduates since they were small. She said they went from just cute to knowing everything when they were teenagers. She described herself as a beaming mom since her son Gabe and his friends were graduating. She thanked his friends for supporting her son.

“Savor this as one of many successes,” she said.

Fredericks recognized the teachers and the school leadership team for this year’s successes, especially AVID for preparing students for college. She told the students to honor their heritage and their culture.