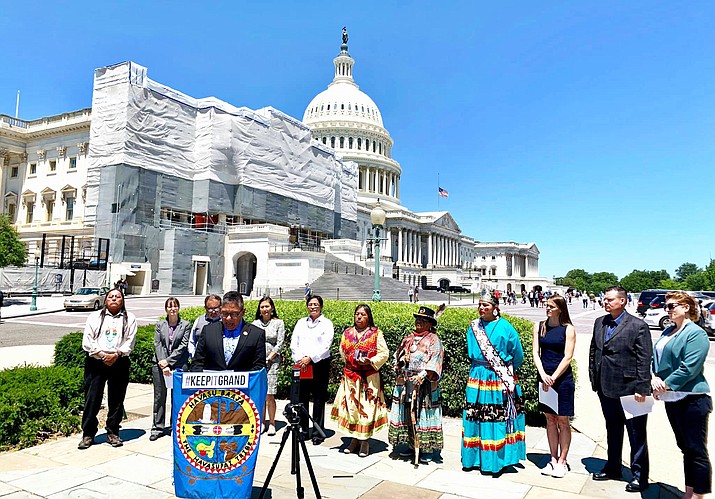 WASHINGTON — On June 4, Navajo Nation Vice President Myron Lizer joined members of the U.S. House Natural Resources Committee at the U.S. Capitol for a press conference on the need to protect the Grand Canyon from new uranium mining claims. 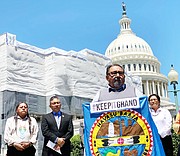 The event came a day ahead of the June 5 hearing before the National Parks, Forests, and Public Lands Subcommittee on H.R. 1373, the Grand Canyon Centennial Protection Act — a bill introduced by Congressman Raúl Grijalva (D-AZ) Feb. 26 to implement a permanent ban on uranium mining on approximately one million acres of land north and south of the Grand Canyon National Park.

Lizer spoke about the Navajo Nation’s long and troubled history with uranium mining that began many decades ago when the federal government mined over 30 million tons of uranium ore on the Navajo Nation from 1944 to 1986. As a result, today there remains over 500 abandoned uranium mines that have yet to be reclaimed and that have caused major health and environmental problems for many Navajo people and communities.

“Although mining companies may state their intention to clean up their mine sites upon completion of mining activities, our direct experience has shown otherwise. There are over 523 abandoned uranium mines on the Navajo Nation and it will take many decades to address them, not to mention billions of dollars. Further, uranium mine sites can remain radioactive for millions of years and therefore continue to a health and environmental risk to the Navajo people,” Lizer said.

“It should come as no surprise, therefore, that the Navajo Nation strongly opposes the permitting of any uranium mining operation near Navajo Nation lands, other tribal lands, and national parks,” Lizer added. “I am very grateful to Chairman Grijalva, Congresswoman Haaland, and all of the other supporters who joined us for today’s event to voice our support for the protection of Grand Canyon.”

The National Parks, Forests, and Public Lands Subcommittee will hold a hearing on June 5, where Vice President Lizer will provide testimony in support of a separate bill, H.R. 2181: the “Chaco Cultural Heritage Area Protection Act of 2019” sponsored by Congressman Ben Ray Luján (D-N.M.). President Jonathan Nez and Vice President Lizer have expressed strong support for the protection of the Greater Chaco Landscape through H.R. 2181.