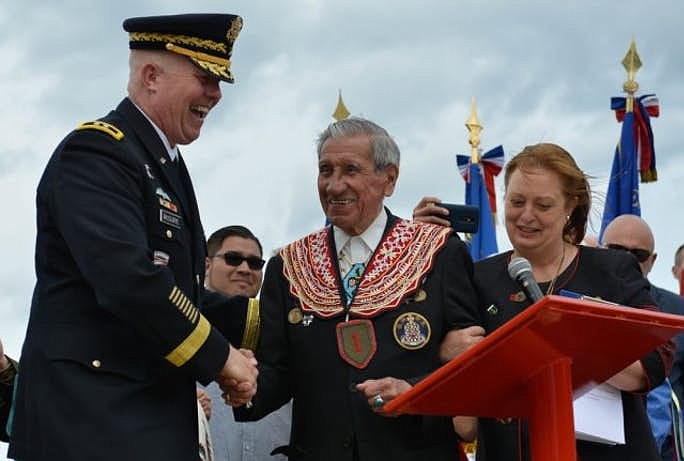 In 2017, retired Master Sgt. Charles Norman Shay, Penobscot, a platoon medic for Fox Company of the 2nd Battalion for the 16th Infantry Regiment, was honored on the beaches of Normandy with a memorial dedication that was held in his honor. (Courtesy U.S. Army release)

PHOENIX — In 2017, retired Master Sgt. Charles Norman Shay, Penobscot, a platoon medic for Fox Company of the 2nd Battalion for the 16th Infantry Regiment, was honored on the beaches of Normandy with a memorial dedication that was held in his honor.

The physical memorial, erected in Saint Laurent sur Mer, France is a large granite sculpture of a turtle and named the “Turtle Monument” to honor the contributions and sacrifices of Native Americans who landed on Omaha Beach 75 years ago.

According to Dutch Anthropologist Dr. Harald E.L. Prins, an approximate 175 known Native Americans landed on Omaha Beach in Normandy, and 55 have been identified as of 2019.

Shay was a 19-year-old combat medic when he landed on the beach on June 6, 1944, His regiment was one of three combat regiments on D-Day.

In a U.S. Army release, Shay described the experiences that have stayed with him to this day, he is now 95-years-old.

“On the evening of June 5, 1944, I was aboard the Henrico heading across the Channel, when I had a surprise visit from a Penobscot Indian warrior named Melvin Neptune,” Shay recalled in the release. “He didn’t trouble me with his combat experience, nor did he offer me advice. Instead, we talked about home because he knew I had never been in combat… all hell was about to break loose on me.”

“Only two of us appear to have survived the war without being wounded,” Shay continued. “We were lucky. Call it what you want, fate, destiny, angels, spirits or God. All I know is that my mother prayed for me.”

Shay also recalled how his mother had prayed for him and his three brothers who were also serving in World War II. One of his brothers was in the U.S. Army as a b-17 gunner, and two were in the U.S. Navy.

In 2019, Shay delivered remarks at the American War Cemetery and Memorial and a delegation of 80 Native Americans performed a ceremony in honor of an estimated 500 Native American service members who participated during the D-Day Allied Invasion in 1944.

Many of the soldiers were killed in battle or were wounded, drowned or captured. As a combat medic during the battle, Shay dedicated himself to his position and rescued drowning wounded fellow soldiers. He received a Silver Star for his valor on the battlefield.

After D-Day, Shay continued to support the fight in several battles and went on to participate in other wars. He was captured in World War II a spent a month in a German prison camp.

After World War II, he received four bronze stars. He later served in the Korean War in the Military Police and later entered the U.S. Air Force Reserve and then transitioned into an active duty Master Sergeant.

In 2017, Shay said of D-Day, “Every soldier who landed on this beach was a hero ... We will not forget their sacrifices.”