POLACCA, Ariz. — Louis Sisto, a graduate of Hopi High School, is now a civil engineer, but there was a time when he was homeless while going to college.

Sisto served as the keynote speaker for the Hopi Junior High promotion on May 22 as the eighth grade students heard his story of hardship before his recent success.

“I tell my story to inspire and illustrate. I’m sure some of you can relate,” he said.

Sisto was raised by a single grandma and caused her many problems — he went to a juvenile detention center and was put on probation. He did not know what he wanted to do and he didn’t know what a civil engineer did. He took classes at Yavapai College, but he flunked math three times.

The change came when Sisto took a sociology class that told him that students who grow up without parents are much more likely to have a high rate of failure.

“I refused to be a statistic,” he said. 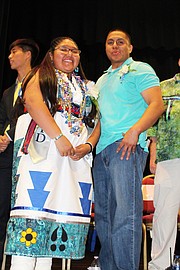 During his senior year at NAU, a chief executive officer from an engineering company made him a deal. As long as he would sign on with the company after he graduated from NAU, the CEO had a house in Flagstaff where he could stay for free. He took the deal immediately had a roommate who had also been a homeless student.

“We didn’t have money for utilities so there was cold water and no electricity. It was just like home,” he said. “But it was more of a problem because we didn’t have a wood stove. These are the realities for Native American youth. I failed again and again, but I never gave up.”

“But I learned that if you get knocked down, fall on your back because if you can look up then you can get up,” he said.

Hopi Junior High Principal Alban Naha said Sisto was a good keynote speaker because at the junior high, they talk about overcoming hardships and Sisto is a good example of that.

“It’s nice to see one of our own that has had success,” Naha said.

Lim said when he started high school that he was afraid.

“Going to high school is a big step to becoming an adult,” he said.

Lim told the students to remember their tribe, their clan and their high school. He drew laughter when he told the students to stop talking back to their parents at Wal-Mart, but his point was that they should be careful with their behavior because people are always watching.

Nodman said he was also nervous when he was a freshman, but he learned who he was and became proud of that.

“Don’t be afraid to give your best effort,” he said. “Give a positive vibe to yourself and others. Be courteous and kind because that will come back to you later in life. The high school years are beautiful and this is an amazing place.”

Salutatorian Kaili Batala thanked her family, friends and teachers for encouraging her to keep her grades up. Batala was known for running cross-country and playing basketball. She hopes to go to Harvard to major in nursing.

Batala congratulated her classmates and hopes they all excel in high school.

Batala giggled her way through her speech and instead of saying freshmen she accidentally said “fresh meat” which drew chiding later from Naha.

Tenakhongva, who presented Batala with her Salutatorian award, said he is glad that Hopi High became a grant school that is authorized by the Hopi Tribal Council. He urged the promoting students to attend Hopi High School rather than other area high schools.

“We need you out here. Please do not leave the school,” he said.

Valedictorian Evonne Sidney said the students will be starting a new chapter in their life. Sidney was also known for cross-country and basketball. She hopes to go to Harvard for health sciences. She said the students should be thankful for their teachers.

Sidney told her classmates that education is extremely important and they need to learn to balance education and culture.

Chairman Timothy Nuvangyaoma, who presented Sidney with the valedictorian award, said the award is a big deal. He told students to keep up their good work.

Nuvangyaoma drew laughter when he spoke about buying his clothes at Wal-Mart, Goodwill and Savers.

“Don’t let anyone judge you on your clothes because we are all individuals and in college you will learn the value of a dollar,” he said.

Nuvangyaoma said this is an exciting time for the students as they transition into high school where they will meet new people and have new relationships.

Nuvangyaoma told the audience to continue to support young people.

“You are the future of the Hopi people and I encourage you to keep going,” he said.

Principal Naha drew applause when he asked the audience: “Don’t they look great?”

Naha said the students deserve recognition for their hard work and dedication. He also praised the junior high teachers saying they do not get enough recognition.

“They care deeply about our students,” he said.

Naha told the students this is not the end, but it is a stepping-stone. He said this year they came up with a new approach by developing a school leadership team.

Naha thanked Nuvangyaoma for coming to the school a couple weeks earlier to talk about the current issues.

“That’s why you (students) come to school: To become leaders,” he said.

“I am proud of you and come visit me,” he said.