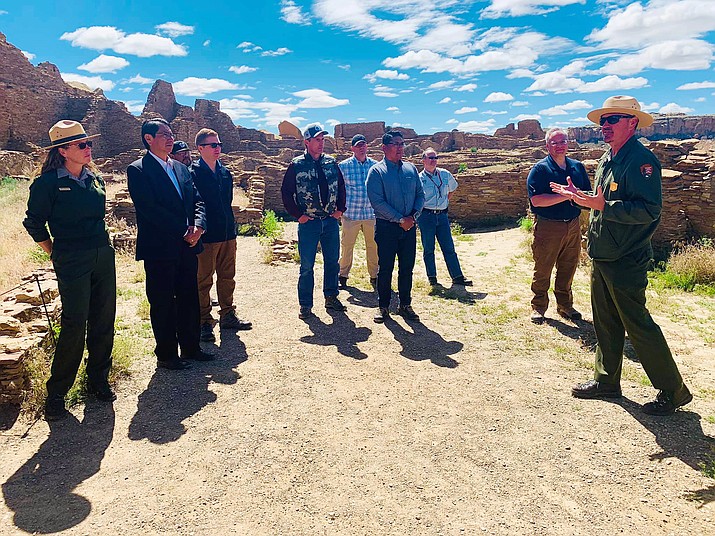 WINDOW ROCK, Ariz. — The Navajo Nation president, Pueblo tribal leaders and New Mexico elected leaders advocated for the protection of cultural and historical sites sacred to many tribes as they visited Chaco Culture National Historical Park with the interior secretary.

On April 9, Heinrich and Sen. Tom Udall (D-N.M.) introduced the S. 1079: the Chaco Cultural Heritage Area Protection Act of 2019, which would create a 10-mile buffer zone around the Chaco landscape to prevent oil and gas development in the area.

“This is about preserving our teachings and our way of life for indigenous people. In addition to that, we are encouraging more studies to be conducted to assess the impacts of oil and gas drilling on the health and safety of our people who reside in the area and on the environment,” Nez said. “There are many stories and teachings that our people have passed down for generations — it serves as a foundation for the identity of our people.”

The visit was the first time Bernhardt viewed the Greater Chaco Landscape in person. During the secretary’s confirmation hearing before the U.S. Senate last month, Heinrich requested Bernhardt visit the area to gain a firsthand perspective of the cultural and historical significance that it holds for tribes.

“I am very grateful to Senator Heinrich, Senator Udall, Congressman Luján, and Congresswoman Haaland for sponsoring the bill and for the secretary’s visit,” Nez said. “I believe through our dialogue, we have a path forward to work together to protect this special area.”

Bernhardt said he has a greater appreciation and understanding for the importance and cultural significance of the Chaco landscape for tribes. He added that the U.S. Department of the Interior would revisit its position on the Chaco Cultural Heritage Area Protection Act of 2019 to work together to develop a path forward to address the concerns of the tribes.

More information on the Senate bill, S. 1079: the Chaco Cultural Heritage Area Protection Act of 2019, is available by visiting https://www.congress.gov/bill/116th-congress/senate-bill/1079/text.