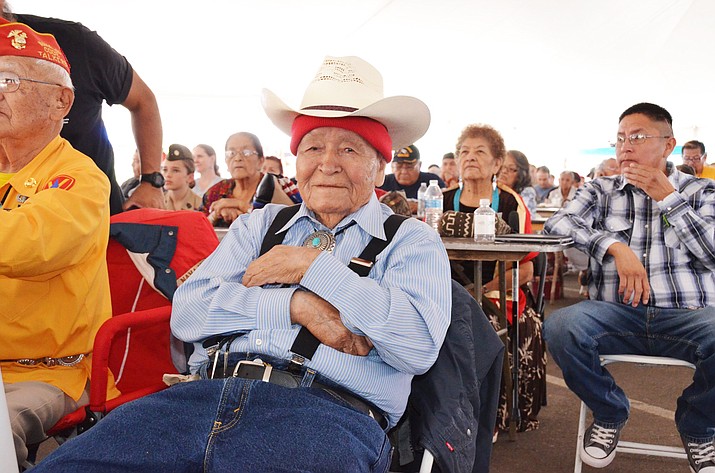 Sen. John Pinto passed away May 24 at the age of 94. (Office of the President and Vice President via Facebook)

An honor guard salutes Sen. John Pinto as his casket is carried out of the Sacred Heart Cathedral in Gallup, New Mexico May 30. (Office of the President and Vice President )

Pinto was Díbéłzhíní (Black Sheep Clan) and born for the Táchii’nii (Red Running into the Water People Clan). He was born on December 15, 1924, and was originally from Lupton, Arizona. He passed away May 24 at the age of 94.

On May 28, Nez and Lizer issued a proclamation, honoring and recognizing the late Navajo Code Talker and New Mexico State senator. The proclamation ordered all flags on the Navajo Nation to be flown at half-staff on May 29 to 30 in honor and remembrance of his service to the Navajo people and the state of New Mexico.

“On behalf of the Navajo people, we continue to offer our condolences and prayers for his children, grandchildren, friends and colleagues,” Nez said. “Senator Pinto devoted his life to public service and helping our communities. There is no doubt that he changed the lives of so many people for the better. We will miss his smile, his humor, and his love and compassion that he shared with us all.”

Pinto served in the U.S. Marine Corps as a Navajo Code Talker during World War II. He was a national hero, veteran and Diné leader, who made tremendous sacrifices and contributions for the Navajo people.

Following his military service, Pinto returned home and began his duties as a public servant for 42 years as a member of the New Mexico State Senate beginning in 1977, making him the longest-serving legislator in state history.

Sen. John Pinto, the longest serving legislator in New Mexico state history, was laid to rest surrounding by family, friends and other officials May 30 in Gallup, New Mexico. (Office of the President and Vice President )

“Senator Pinto’s sacrifices to protect and serve the Navajo Nation and the United States will forever be cherished and remembered. We are truly thankful to his family for sharing his life with us and the entire country,” Lizer said.

The funeral service was held at Sacred Heart Cathedral in Gallup, New Mexico and a reception followed at Red Rock State Park where Nez and Lizer presented the proclamation to the family.