Kinaaldá: A Navajo girl comes of age in traditional ceremony 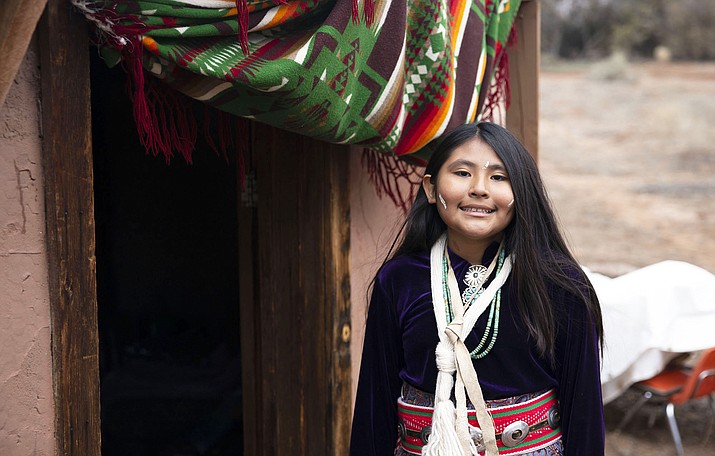 Keiloh Nellie Poola officially came of age February 3. The streaks of white paint on her cheeks are a final blessing from her sponsor. (Photo by Vivian Meza/Special for Cronkite News)

LUPTON, Ariz. — Hours before the sun will conquer the dark, a light rain falls, burning wood crackles and soft voices drift from a hogan. An 11-year-old Navajo girl, dressed in a purple velvet blouse, multicolored camp skirt and moccasins, her long, black hair tied into a ponytail, struggles to keep her eyes open.

On one side of the traditional dwelling, medicine men and women, some with colorful cloths tied around their heads, sing songs of prayer in Navajo. On another side, family and friends, some dressed in velvet, others in sweatshirts and comfortable clothing, sit on old couch cushions and pillows along the hogan’s angled walls.

They’re here to guide and support young Kieloh Nellie Poola as she comes of age.

The ceremony is called a Kinaaldá, and every woman in Kieloh’s family before her has been through it as they transitioned into adulthood. It takes place in the days after a girl’s first menstrual period, a sign that she can bear children in the future. Kieloh is surrounded by four generations of Navajo women in her family.

“The first coming-of-age is considered or believed to be holy. You are becoming a woman, and you will have children, become a grandma,” said Nellie Shirley, 86, Kieloh’s great-grandmother. “The songs they sing are about life and the future for my granddaughter.”

The story of Changing Woman

Kieloh Nellie Poola, 11, stands with her mother, Raphael Price, outside the hogan where her Kinaaldá will take place. (Photo courtesy of Natalia Miles)

The Kinaaldá tradition originates from the ancient story of Changing Woman, one of the Holy People, or creators, in Navajo belief. When her body began to transform so that she could bear children, the Holy People marked the occasion by conducting the first Kinaaldá. After being physically molded by First Woman into the shape of a woman, Changing Woman baked a cake made of ground corn and offered the first piece to the Sun, the most powerful Holy Person.

“She had that ceremony done for her, so that has carried on up to now,” Shirley said. “The songs about her ceremony talk about how the Earth and the skies are connected, and how the plants and mountains are connected.”

The first ceremony, the one for most Navajo girls, typically is conducted over four days to represent the four seasons and the four sacred mountains of the Four Corners region. In that time, the girl who is coming of age, along with members of her family and community, will bake a corn cake, called an alkaan, by burying it in an earthen pit and setting a fire atop it. Early in the evening on the second-to-last day, a medicine man is called to help lead prayer songs and other aspects of the ceremony.

The last night is the most detailed part of the ceremony, filled with rituals that are crucial to ensuring a bright and fruitful future for Kieloh. It also requires singing prayers all night until the sun rises to begin the last day.

Kieloh’s mother, Raphael Price, had been up for 36 hours straight preparing for her daughter’s Kinaaldá, but it was all worth it, she said.

As the sun rises

Once the alkaan batter is poured into the pit, it’s topped with corn husks and covered with dirt. A fire will burn on top of it for at least a day before the Kinaaldá ceremony ends so the cake will be thoroughly baked. (Photo courtesy of Natalia Miles)

Since 10 o’clock the previous night, the medicine men and Kieloh’s family have been praying as a fireplace burns in the middle of the hogan’s red dirt floor. A faded blue sky begins to peek through the curtains that cover the only two windows of the hogan and through the cracks of the log roof.

Kieloh, her eyes slipping closed, rouses as the head medicine man speaks to her in Navajo and English, instructing her on the next steps. All of them, he says, are meant to bring her strength and guidance as she becomes a woman and, hopefully, a mother someday.

As he speaks, some of the women get up to spread cornmeal on a pile of book bags, ceremonial baskets and some of Kieloh’s personal items that are gathered behind the fire. They represent Kieloh’s journey into the next phase of her life. The women also pass around a small bag of the cornmeal to bless themselves.

Shirley is someone her great-granddaughter can look to as an example of a Navajo woman. The medicine man guides Shirley as she ceremoniously removes all the turquoise jewelry Kieloh is wearing, washes it in a bowl, and sets the jewelry aside. She washes Kieloh’s hair with the same water, which then is poured into a small hole in the floor. Kieloh’s grandmothers cover it with dirt, then gather the wet soil into a blanket and take it outside.

As the sun rises, the medicine man instructs Kieloh to stand, leave the hogan, and run to the east until the final songs of the ceremony are finished. Her family members follow. When she returns 20 minutes later, she’s officially considered a woman.

After Kieloh, breathless and cold from the chill, re-enters the hogan, her sponsor, her paternal grandmother, paints streaks of white across her cheeks to give her one final blessing, as well as streaks across her palms so Kieloh can share the blessing with others.

With a small brush in one hand, a bowl of paint in the other, Kieloh paints white lines on their palms. They then tap along their bodies from toe to head so that the blessing will touch every part of their being.

After the blessing, Kieloh is escorted outside again by her female relatives and laid across a stack of blankets by the doorway of the hogan. Her sponsor “molds” her one last time by lifting her chin and running her hands along her arms and legs, just as Changing Woman was molded, so that she may grow strong and beautiful.

The eight or so children attending the ceremony line up and stand so that Kieloh may bless them for growth by tapping them from toe to head and stretching their arms.

To continue her show of generosity and kindness, each participant in the Kinaaldá is given a piece of the alkaan, the corn cake, and a bag of goodies: candy, snacks and soda. Out of respect, the head medicine man who conducted the ceremony is given the first and largest piece of cake.

The gifts to all of her guests also show Kieloh appreciates them for supporting her during this pivotal moment.

“We pray along, sing along, get together to make it strong,” Shirley said.

Looking to the future

The ceremony celebrates a girl’s transition into womanhood and her ability to bear children, but today it is mostly seen as a way of honoring Navajo culture and preserving its most precious traditions and beliefs. It is also a way to bring together a family, a community, to support someone young and in need of guidance.

Shirley hopes that her great-granddaughter, through the blessings and prayers of her Kinaaldá, will go on to pursue an education, be a good person and live a long, full life.

“Nothing to brag about — just be humble and the rest will take its place,” she said.