Told she shouldn't sign up, a Native female Marine talks about her combat role 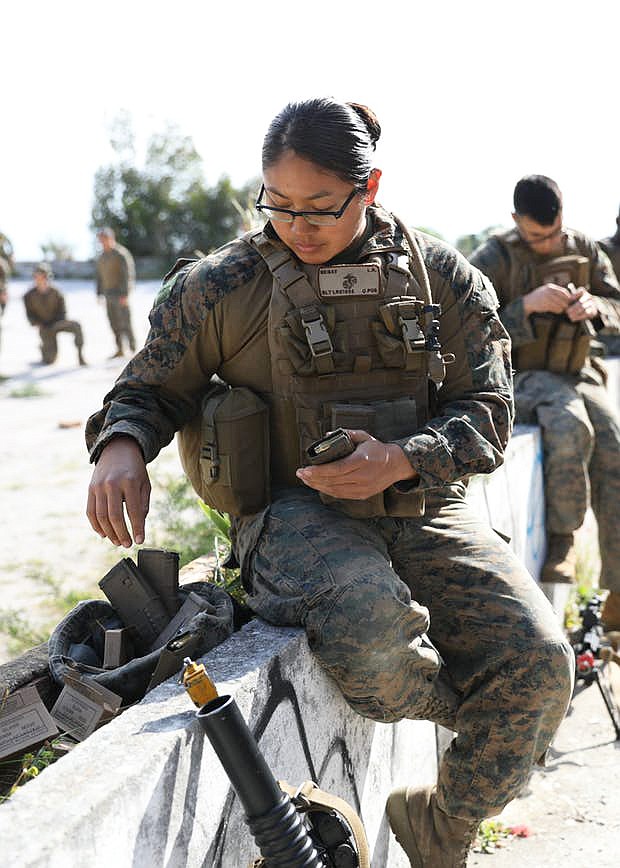 Leondra Begay, a 22-year-old U.S. Marine, was once told by her brother that she shouldn’t sign up for a combat arms role in the Marines. Her brother Eric Sorrellhorse, an infantryman in the Army, said the combat role would be “too demanding.”

Begay signed up right away.

Begay has warrior’s blood running through her veins. She is the great-great-granddaughter of the Navajo Code Talker Jimmie Clark, a United States Marine Corps Private First Class who served in Iwo Jima from 1943-1945. Clark passed away on April 25th, 1973.

She now serves as a U.S. Marine combat infantry grenadier in the 1st Battalion 2nd Marine Division at Camp Lejeune.

Begay says she is confident she can rise to the task, and she is proving it to be the case. In an interview with Begay, this combat-ready US Marine told Indian Country Today about some of the struggles she has faced, and how proud she is to represent such a minor percentage of the U.S. military and the U.S. Marine Corps.

Leondra Begay hails from Red Mesa, Arizona, and tells her Dine’ roots and is from the Navajo Nation. Begay is Ta’neezahni (Tangle Clan) Hashlishni (Mud Clan) Bitaani (Bitter Water clan) and Ashihii (Salt Water Clan). Her parents are Leonard and Norleen Begay, she graduated from Kirtland Central High School in 2015. She graduated boot camp at the Marine Corps Recruit Depot Parris Island, South Carolina on December 2017 then went to the Camp Geiger, North Carolina Infantry Training Battalion, which she completed in March 2018.

Begay says she wanted to pursue a further education doing something that she enjoys, but mostly, she says is to be part of an elite force that only a few could speak of, the Marine Corps.

“I wanted to challenge and push myself physically and mentally to limits that I never thought were possible’” she said.

Leondra Begay's brother said that a combat role would be too demanding. She is proving him wrong. (Photo courtesy of Indian Country Today)

Begay says it’s not just an honor serving her country, it is also honor walking in the steps of her great-great-grandfather, a Navajo Code Talker.

“I come from a reservation where our Navajo Code Talkers impacted our country using our language during World War II," she said. "My great-great-grandfather served in the Marine Corps as a Navajo Code Talker. To walk in his ancestral footstep gives me that pride I hold to myself and the motivation to give 110 percent every day. It makes me want to surpass expectations of what they believe Native Americans can be and who we are.”

'You shouldn't' was her cue to sign up for combat arms

When making a decision about her path in the military, Begay says her brother’s warnings, not to go into combat arms, gave her the motivation to do it. When making her selection of her career path also called her specific “military occupational specialty” code or “MOS” she specifically signed up for combat arms.

“My brother Eric Sorrellhorse, who is currently serving in the Army, as well as the Infantry, influenced my decision to be in this occupation. I asked him about what it was like, he specifically told me, ‘It is a very demanding job for a female, you shouldn't sign up for it.’ It wasn’t until then ... I decided that this was what I wanted to do,” Begay said.

As a member of the 1st Battalion 2nd Marine Division at Camp Lejuene, North Carolina, Begay’s “military occupational specialty” or MOS is 03-11 known as the infantry rifleman. An infantry rifleman is the Marine Corps primary soldier identifier, however, there are additional specifics each rifleman (or in this case riflewoman) focuses on for specific tasks in combat.

Currently, Begay trains as a grenadier using an M4A1 service rifle with an attached M203 grenade launcher. As a grenadier, Begay, and others that serve as grenadiers are responsible for effective deployment of heavy fire volumes.

In a show of support and solidarity, Leondra Begaye poses with her fellow Marines during field maneuvers. (Photo courtesy of Indian Country Today)

Though Begay has not experienced actual combat as of 2019, she says she does feel prepared if the situation ever arises. “I have learned over time in the Marine Corps that “We train how we fight.” In all the training that I have experienced, I refer to real-life situations. I am not just preparing through the course of actions to my job, but physically and mentally as well.”

Females in combat: Support and backlash

Serving as the first female in her combat unit, Begay says she has received support as well as she has faced criticism or the fairly common, raised eyebrow. But she says she welcomes any challenge in the face of adversity.

“The most support I have received is from my family. They are the ones who helped me overcome the challenges I faced being in this specific job,” Begay said.

Begay said after she completed her initial training at the School of Infantry in March 2018, and was sent to her first duty station, being the first female in the unit was hard for a lot of the men to accept because she was entering an occupation dominated by males for hundreds of years. But she says she refuses to quit.

“To be a part of a male-dominant occupation, the experiences there were very challenging,” Begay said. “At times I wanted to throw in the towel and change jobs but didn’t want to give them the opportunity to say, ‘You shouldn’t be in the Infantry.’”

Begay also said there was a backlash towards her ethnicity as a Native American.

“Being one of the females there, I was already a target,” she said. “Only having a handful of Native Americans stationed on the II Marine Expeditionary Force, it’s difficult. Coming from a long line history of ancestors who faced racism helped me keep my composure and strength.”

“Being in the Marine Corps and in the infantry has improved me in many ways as an individual,” Begay said. “Coming back from deployment and my experience until now I’ll say … ‘the world is yours and nothing can’t stop you, your dreams or goals are never too big or impossible.’ I'm blessed to be doing what I am doing as a Navajo woman. Just because you complete and graduate from the School of Infantry doesn’t make you an infantryman, it’s only the beginning.”