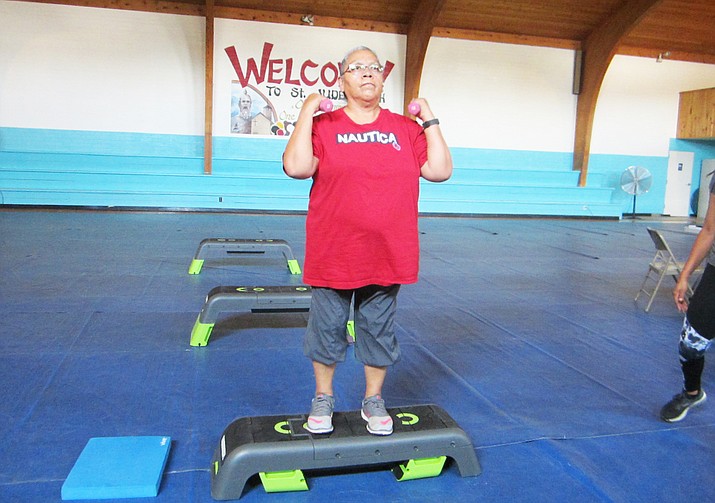 Dottie Sumatzkuku learns about balance and strengthing exerices at St. Jude's Catholic Church gym in Tuba City. Sumatzkuku is a breast cancer survivor and is part of Restoring Balance, a study looking at the effects of exercise on Native American cancer survivors. (Katherine Locke/NHO)

TUBA CITY, Ariz. — Dottie Sumatzkuku has been exercising for about 20 minutes at the gym at St. Jude’s Catholic Church in Tuba City with trainer Denise McClellan and she is not slowing down.

Sumatzkuku is a breast cancer survivor and is one person out of about 60 participants in the last year and a half who are part of Restoring Balance, a study which is a first of its kind, showing the effects of exercise on Native American cancer survivors.

Dottie Sumatzkuku said she is happy with the program. Her breast cancer is in remission and it has been more than five years since her diagnosis. (Katherine Locke/NHO)

Restoring Balance follows the American College of Sports Medicine guidelines for physical activity among cancer survivors. In addition, the study also considered many cultural and practical elements associated with Native communities by completing focus groups and interviews among Native American cancer survivors before the study was designed.

Brenda Charley, program coordinator for Native American Cancer Prevention at Northern Arizona University is the lead coordinator on the study. Charley said the program is a 12-week physical activity intervention that is part of an 18-week research study.

During the study, trainers take height and weight, BMI and a body fat analysis. Along with that, participants answer surveys on quality of life, physical activity levels and A1C measurements, which show a participants blood sugar levels, and blood pressure.

“When you combine all of those measurements together, you get a good idea of how their body is reacting to the exercise over the course of 12 weeks,” Charley said. “The measurements are done every six weeks, so there’s actually four times we measure them throughout the 18 weeks.”

The recruitment effort was for cancer survivors, Charley said.

Along with that criteria, Charley said, the program also lets participants enroll two people, who could be family or friends, so that participants have support from home.

“It could be a friend, group exercise session,” Charley said.

In one of the focus groups as they were designing the study, a lot of cancer survivors felt they needed family or friends support, Charley said.

“They needed a social circle to lean on and so, as the pilot was introduced, it was very clear that the ones who were adhering to the exercise were the ones who had that support,” she said.

The focus groups helped figure out the best way to deliver the program and also how to deal with the remoteness of some of the locations and cultural barriers.

“In Navajo culture, talking about disease is almost like inviting it in,” Charley said. “So, trying to promote this has been extremely challenging. We’ve set up tables at different events and the older people will ask, ‘What are you talking about?’ And we’d start talking about it, and they would just walk away.”

But cancer survivors participating in the program are very outspoken about it, Charley said.

“They really want to let people know that it’s ok to talk about it, it’s ok to tell people that you’re supporting them,” Charley said. “Some of them have even mentioned that once they were diagnosed with cancer, some people would stay away from them because they didn’t want to ‘catch’ it.”

Charley explained that was the reason for the quality of life questionnaires that asked whether participants felt isolated or lonely.

“A lot of them felt like that at the beginning of their cancer diagnosis,” Charley said. “We were trying to see if having them bring two family or friends with them actually made them feel better as they began to exercise more.”

Dottie Sumatzkuku uses an exercise bike to begin her workout as part of the Restoring Balance study, which is studying the effect of exercise on Native American Cancer survivors. (Katherine Locke/NHO)

Some participants exercise together, if their schedules allow. But some get scheduled individually, too.

“If we have a cancer survivor in the morning and their friend or family in the afternoon, they’re still on the same week and they can still talk about it,” Charley said.

Charley emphasizes that nothing like this study has existed until now and the program is steering its way in the dark. But Charley said it is important for people to understand the importance of what they are doing.

“The importance of exercise on any chronic condition,” she said. “That’s what we’re really trying to emphasize. One of the things we’re running into is people saying, ‘I don’t have time to do this at home.’ We’re trying to explain to them the physiological importance of what happens inside their body when they choose to strengthen their bodies or when they choose to do something that gets their heart and lungs going.”

There are things going on inside the body that people can’t see on the outside, Charley said.

“But things are going on inside the body that can help you fight this disease,” she said. “That’s been the hard part because sometimes they’ll drop out before you can get there.”

The second thing the study emphasizes is: exercise is not just for looking good and it’s not a luxury.

And Charley said, the participants who have gone through the program successfully really understand that message.

Sumatzkuku is one of those people and she is happy with the program. Her breast cancer is in remission and it has been more than five years since her diagnosis. Her oncologist asked her if she would be interested in the program.

“I think it’s awesome,” Sumatzkuku said as she kept her heart rate up with a brisk walk from one end of the gym to the other. “It’s really helped me to get back to exercising.”

Sumatzkuku said the in previous years after her cancer diagnosis, she hadn’t been exercising. But now she exercises on her own as well as in her sessions with trainers and she said the exercise has helped her build confidence in herself, as well.

“I started in May of 2019,” she said. “I’ve been coming every week on Wednesdays. I just fell into it. It wasn’t that hard. I slowly picked up what was asked of me. And it just got easier. On a daily basis, I’ve been walking at least two miles.”

The research team comes out of Northern Arizona University. That team is working in collaboration with the University of Arizona and the UofA Cancer Center. NAU’s program runs through the Partnership for Native American Cancer Prevention.

GRIC recently celebrated 25 years of the opening of its first casino, which allowed a diversity of economic development including the Wild Horse Sheraton Hotel, a golf course, scholarships for students and improving roads.

“This is our major source of income,” Lewis said.

The casinos have also given GRIC more funding for education. On Aug. 2, GRIC plans to open a school for K-8 on the west side of GRIC. The school will have a green house and offer classes in everything from culture to the sciences. The school was designed by the community.

“Education is critical for our community. That’s why we use our resources for higher education programs,” Lewis said. “This will probably be the most state-of-the-art school in Indian country.”

Lewis said the successful programs are because of community support and remain in line with their community values.

Lewis said for him it’s always about his parents. His mother, Willardene, was a children’s court judge and worked on family domestic violence issues. His father, Rodney Lewis, was a tribal leader and attorney who was among the first Native Americans to argue a case before the U.S. Supreme Court.

“I was really glad to be part of that,” he said.

About 25 years ago, the Library of Congress added “Smoke Signals” to its collection.

GRIC members have served in the military in large numbers. The most recognized GRIC veteran is Ira Hayes. Lewis’ father served as an airborne ranger.

“I am not a veteran, but we have a proud history,” he said.

Lewis’ grandfather’s brother, Richard Lewis, was killed in the Pacific and was a friend of Ira Hayes.

So it was not a surprise when one of Gov. Lewis’ first initiatives was to create the first veterans and family services department on GRIC. He appointed a task force by and for veterans to come up with a plan. 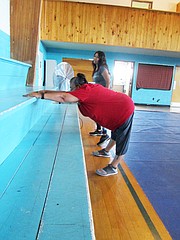 Dottie Sumatzkuku stretches out her back in legs as trainer Denise McClellan looks on. (Katherine Locke/NHO)

The veterans decided that they wanted not only something for themselves but for their loved ones, which is why they added family services to the veterans program.

Lewis said the lack of treatment for veterans in Arizona and nationally is well known, so a lot of the GRIC veterans would rather get their health care from the GRIC health system than from the Veterans Administration. He said the problem is that there is a legal mandate that the VA reimburse tribal facilities for health care when they provide healthcare to veterans and this isn’t happening. This case is currently tied up in the courts.

Lewis has been advocating for Native American voting rights for decades going back to when there was suppression of voting rights on the Pine Ridge Reservation.

“This is an important issue to us because we have had issues in the past with polling places,” he said.

“We are making sure all of our members can have their rights to vote,” he said.