Out and about: On the Cabin Loop Trail on the Mogollon Rim 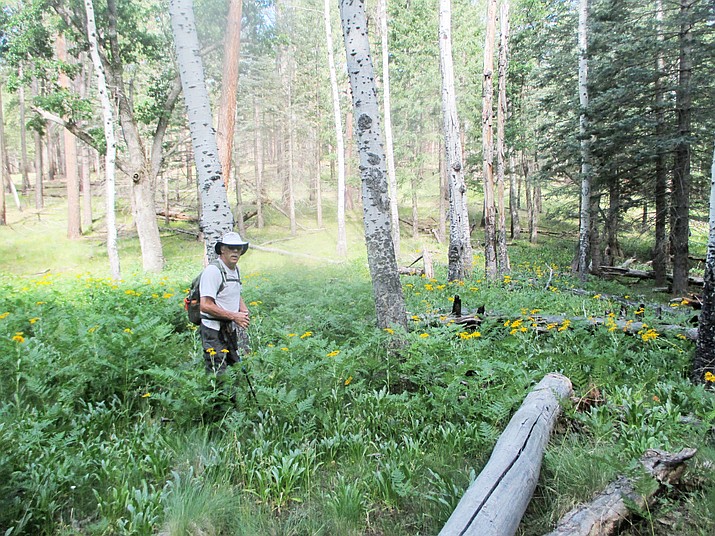 FLAGSTAFF, Ariz. — The parking lot of the U-Bar Trail section of the Cabin Loop Trail is full of pine trees, but pretty quiet except for the loud tapping of a woodpecker, who was banging so loud that it seemed as though a construction worker was on the job. 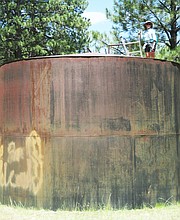 Margaret Starnes ascends to the top of an old water tank during a hike on the Mogollon Rim. (Stan Bindell/NHO)

It was just the woodpecker’s way of telling the hikers that they were in for a ‘then hike,’ which is when every so often on the hike that hikers come across another then: A then that is beautiful, different and entertaining to the hiker.

There is plenty of them along the Cabin Loop Trail because it is 24 miles long and comprised of three trails on the Mogollon Rim: The U Bar Trail, the Houston Brothers Trail and the Barbershop Trail. Thanks to hike leader Larry Byk we were able to do a 17.3 mile section of the Cabin Loop Trail starting with the U-Bar trail.

The three trails comprising Cabin Loop were developed in the early 1900s linking General Springs, Pinchot and Buck Springs Fire Guard stations. The Fred Haught Trail also leads to Pinchot Cabin, but signs warn that this trail was washed out.

These trails have been used by hikers, campers, forest service personnel, ranchers, hunters and birders.

The Coconino Forest Service website tells hikers that this is “some of the most spectacular country in Arizona.” The diversity of trees, flowers and history along this trail makes it hard to argue with.

The U Bar Trail begins by greeting the hikers with some gentle yellow and white flowers, but not long after the first then occurs: A field of giant sunflowers splattered among aspens. It was early in the day so not many butterflies were out yet, but this area was magnificent.

Turns out there were a couple times on the Cabin Loop Trail where the sunflowers would jump up to greet the hikers. The ones you come across later in the day were filled with butterflies.

The danger to the first then of the sunflowers and aspens is that hikers are likely to run to see the aspens close up without looking down because some barbed wire was on the ground and if you didn’t look it could turn into an ouch.

Not long after this, the next then crosses a gentle slow flowing stream to come across the remains of an old wood cabin. Not much of it remains except for the wood wall around an old window with no glass.

For now, it has turned into a window into nature.

The next then is the first fern forest of many along the trail with many of the ferns going four feet or higher.

The next then is the beginning of the yellow columbines, which come out periodically along the trail.

Hikers soon dip into Barbershop Canyon where the next then involves one of the better streams along the trail, an extra green grass area and a secluded campground which was a great place to stop despite not spending the night.

After climbing out of Barbershop Canyon, hikers come to an old huge water tank that they are tempted to get on with the ladder leading to the top. The ladder is chained down so nobody can take it.

The Houston Brothers trail goes along side of the fenced off Houston Drain Riparian Area. The fence was to keep the wildlife and livestock out. This is a major “then” because the riparian area makes everything along the trail super green with the stream running along the side while hikers pass by a ton of ferns and various flowers.

The next then on the Houston Brothers Trail was seeing a herd of at least 30 elk including many with their babies. Elk and deer are plentiful in this area.

The Barbershop Trail, which comes during the last part of the hike, involves going up and down several hills. By then, the hike we had gone up an accumulation of 2,500 feet. Much of the trail is over 7,000 feet but there were some dips to 5,500 and there is a good bit of shade along the trail for rest stops.

The last great then on the Barbershop Trail was a beanstalky looking plant that the butterflies loved.

The Barbershop Trail was named after a sheepherder who also liked to cut hair, but you don’t want to cut corners on this trail because it has so much beauty to it with the open forests and shallow canyons providing plenty of maple, aspen and oak to go with the ponderosa pine and Douglas Fir.

Buck Springs Cabin is also found along the Barbershop Trail.

The Cabin Loop Trail is not a designated wilderness area, but some would consider it remote since drivers must go down a 16 mile road into the woods. Fortunately, the road was recently graded. While some sedans make it down this road, it is much better done in a truck or a four wheel drive.

More information is available by calling the Mogollon Ranger District at 928-477-2255 or at www.fs.usda.gov/coconino. Houston Brothers Trail is the easiest of the three trails to get to. This is the directions to Houston Brothers: From Winslow, drive about 62 miles south on Route 87, then turn left onto Forest Road 300. Drive 16.1 miles on Forest Road 300 to the trailhead on the left. The dirt parking lot is about 100 yards past the trailhead on the right.