Navajo Festival of Arts and Culture this weekend at Flagstaff museum 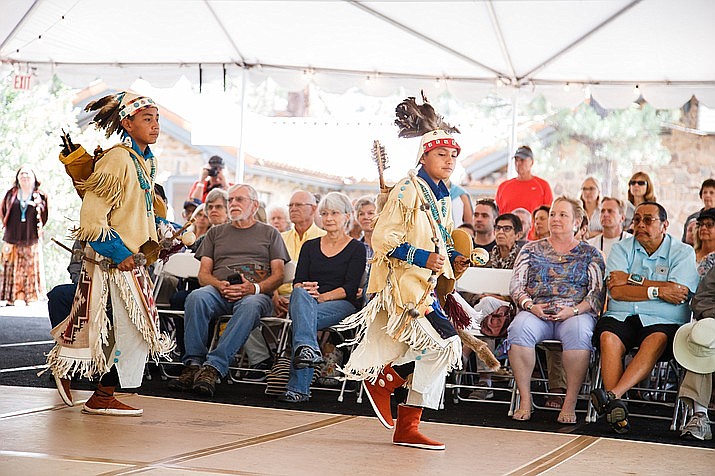 The festival is an opportunity to share and celebrate, through Navajo traditional and contemporary art, music, dance and food. (Photo/Ryan Williams Photography)

FLAGSTAFF, Ariz. — Now in its 70th year, the Navajo Festival of Arts and Culture celebrates Diné culture this weekend at the Museum of Northern Arizona through music, dance, language and art, all within view of the San Francisco Peaks.

“What a significant and sacred space that we get to share aspects of our culture,” said Steve Darden, master of ceremonies for performances in the mainstage tent. “That sacred mountain, she is feminine and gives life and engenders life and nurtures life. She’s the stage. She provides all the lighting. She provides all the atmosphere.”

Steve Darden talks to a festival goer at a previous Navajo Festival of Arts and Culture. (Photo/Museum of Northern Arizona)

Darden first attended the Navajo Festival in 1977, and says he’s seen it change and improve over the past decades. The addition of music, dance performances and talks given by Navajo people has allowed a true sharing of culture. This year the Easton Collection Center will also be open from noon to 2 p.m. each day, offering the chance to view rarely seen Navajo objects from the collections. There will also be workshops in the Colton Community Garden.

“It’s more than entertainment because it’s teaching, it’s presenting the secular aspects of what is our culture,” Darden said. “It’s really hard to separate that, to draw a line between what is sacred and secular in Navajo culture.”

This year a festival favorite and living legend returns to the mainstage — Jones Benally and his family.

“The people love to see this Arizona treasure,” Darden said. “He’s a tremendous ambassador for the secular aspects and the culture of the Diné people and the reality is he lives it as well. He’s not just a showman. He’s a traditional practitioner.”

Nobody knows how old Jones Benally is. Born in a hogan on the Navajo Reservation before birth certificates, he has been performing and sharing his culture for at least 80 years. He will do so again during the Navajo Festival Aug. 3-4, with performances at 10 a.m., 11:30 a.m. and 4:15 p.m. both Saturday and Sunday. Benally is a singer, traditional healer and has been recognized by the state of Arizona as an Arizona Indian Living Treasure. Whether he’s reached or passed the 100 year mark seems irrelevant at this point.

They are particularly well known for the hoop dance. Jones Benally is a World Champion Hoop dancer, but in recent years he’s turned over his hoops to the younger generation. In 2013, Benally was awarded the first Hoop-Dance Legacy Award by the Heard Museum in Phoenix for his training of hundreds of hoop dancers from all over the country. At the time, the press released noted that Jones Benally was in his 90s.

During the festival, the museum walls will reverberate with the sounds of the Diné, which is the most widely spoken language indigenous to the United States. Laura Tohe grew up listening to the soft and musical sounds of her grandmothers speaking Diné. The tonal language rises and falls, with certain words nasalized or cut off, giving it rhythm and richness.

“Maybe that’s what drew me to writing poems,” said Tohe, who is now the poet laureate of the Navajo Nation and will be performing a series of poems set to music. “This language is like a symphony.”

Tohe writes in both Navajo and English, and has found some ideas are easier to convey in one language than the other. A poem she wrote about what the world would be like if there were no animals had deeper impact in Navajo, because Navajo have a closer relationship to animals, viewing the animals as relatives and teachers, not creatures.

“In Navajo it means more,” Tohe said. “In the Navajo world view the animals have always been a part of us and when they leave they take a part of us.”

Darden also finds that there are ideas he shares in Navajo which are difficult to interpret in English.

“The language, it is absolutely significant and I honor that when I MC,” Darden said. “I have to first express it in Navajo.”

The Navajo Festival runs from 9 a.m. to 5 p.m. Aug. 3-4 at the Museum of Northern Arizona. More information is available at www.musnaz.org/heritage/navajo-festival.