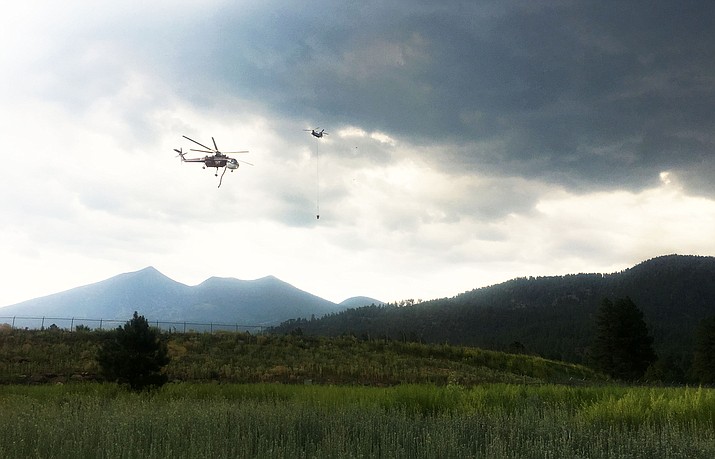 Air resources were utilized throughout July 23 dropping water and retardant to help cool hot spots and slow the fire’s spread prior to afternoon rains. (Katherine Locke/NHO)

FLAGSTAFF, Ariz. – Last night, an infrared reconnaissance flight over the fire area revealed a change in the total reported acreage of the Museum Fire, currently at 1,887 acres.

The fire, located one mile north of Flagstaff, is 10 percent contained.

While the rain helped slow the fire’s spread, heavy fuels will continue to burn for some time.

Firefighters have made progress securing the west side perimeter as well as building line and strategic firing operations on the north and south sides. These burnout operations allow crews to bring the fire along steep slopes at a reduced intensity to a designated point, mindful of soil erosion.

Air resources were utilized throughout the day to drop water and retardant to protect values at risk, help cool hot spots and slow the fire’s spread prior to afternoon rains.

Today’s increase in humidity will allow firefighters to build line directly along the fire’s edge, using ridge lines and natural holding features where they can. Air support will continue as needed with seven helicopters and a mobile retardant base assigned to the fire.

Structure protection resources are assigned within communities closest to the fire.

Evacuation orders remain in place for Mount Elden Lookout Road. Questions regarding evacuation status and procedures should be directed to Coconino County Call Center at (928) 213-2990, staffed between 8 a.m. and 10 p.m. daily. The Red Cross is operating a shelter for those who have been displaced from their homes at Sinagua Middle School located at 3950 E. Butler Avenue in Flagstaff.