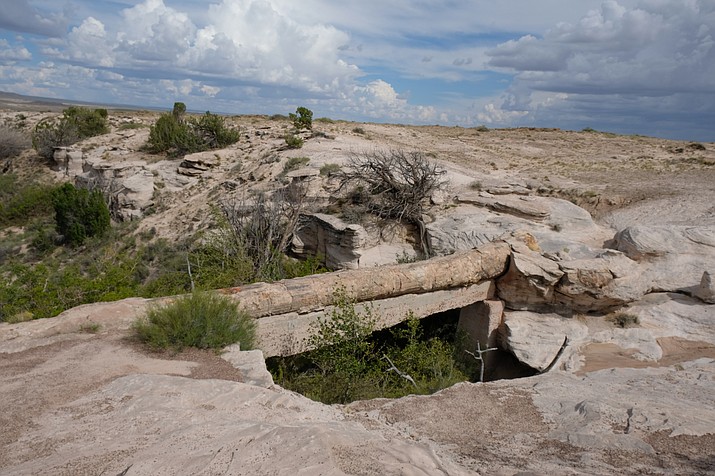 Environmental groups are trying to halt a plan by the Bureau of Land Management to lease more than 4,000 acres of land near the Petrified Forest National Park for oil and gas exploration. (Loretta Yerian/NHO)

PHOENIX — Environmental groups are trying to halt a plan by the Bureau of Land Management to lease more than 4,000 acres of land near the Petrified Forest National Park for oil and gas exploration.

The lawsuit filed July 15 in federal court contends the agency failed to look at the consequences, environmental impacts and adverse effects of oil and gas drilling. That includes not just the immediate area but also effects on water supply and quality farther away.

Attorneys for the environmental groups also charged that BLM did not consider effects on historic properties in the area.

So now they are asking a federal judge to void the leases issues under what they claim is a flawed — and illegal — plan.

But Rebecca Fischer, climate and energy program attorney with WildEarth Guardians, told Capitol Media Services that more than just these leases are at issue.

She said this is the latest manifestation of efforts by the Trump administration to speed oil and gas extraction from public land, ignoring a host of existing environmental laws and regulations. Fischer said this lawsuit should help curb that unilateral action.

At the heart of the fight are some BLM parcels located on either side of Petrified Forest National Park, over the Coconino aquifer.

“As the most productive aquifer in northern Arizona, the Coconino aquifer provides industry, land owners, businesses and municipalities with a dependable supply of water,’’ said attorney Elizabeth Potter of the environmental law firm of Advocates for the West. She represents the Center for Biological Diversity, Sierra Club and WildEarth Guardians.

“Millions of downstream water users rely on the Little Colorado River, which flows into the Grand Canyon and feeds the Colorado River,’’ she wrote, calling the reasonably foreseeable impacts of oil and gas development here as staggering.

“Such development will divert millions of gallons of water from limited local supplies, product significant quantities of air and water pollution, destroy and degrade the landscape and wildlife habitat, and industrialize this quiet, rural area,’’ Potter said. That, in turn, she said, will increase the risk of toxic spills, water contamination, “and will harm wildlife and the people who use and enjoy the lands in the area.’’

It may not just be oil and gas that the bidders are after. There’s also helium, which is critical to manufacturing, technology and aerospace industries.

“However, helium produced as a byproduct of natural gas extraction may be sold pursuant to a contract with the BLM, subject to federal royalties,’’ Potter wrote.

All this, said Fischer, comes back to the policies from the Trump administration.

“It essentially completely made public comment discretionary in some respects,’’ she said. “And it only allows 10 days for protests, which essentially are administrative appeals.’’

All this, said Fischer, comes back to what she and other environmental groups see as “a rush to give away all our public oil and gas lands since the Trump administration came to office.’’

“It’s really just greasing the skids for private industry to take over public for 40 or more years,’’ she said.

What makes this lawsuit important, Fischer said, is that it gives federal courts a chance to determine whether the Trump policies can override other federal environmental and other laws governing when public property is leased out for mineral development.

That sentiment was echoed by Taylor McKinnon, senior public lands campaigner at the Center for Biological Diversity.

“This lawsuit will force the government to follow its own laws to protect northern Arizona’s water, wildlife and public lands," he wrote in a prepared statement.

There was no immediate response from BLM to the lawsuit.

A particular concern according to the lawsuit is the feared use of hydraulic fracking and acidizing, more commonly known as fracking.

On one hand, it makes drilling and extracting more economically viable where it was not before. But the concern is the chemicals and amount of water used.

Last year Congressman Tom O’Halleran expressed concerns with the leases, including the threat of runoff into the Little Colorado and Puerco rivers, urging that the leases not move forward.