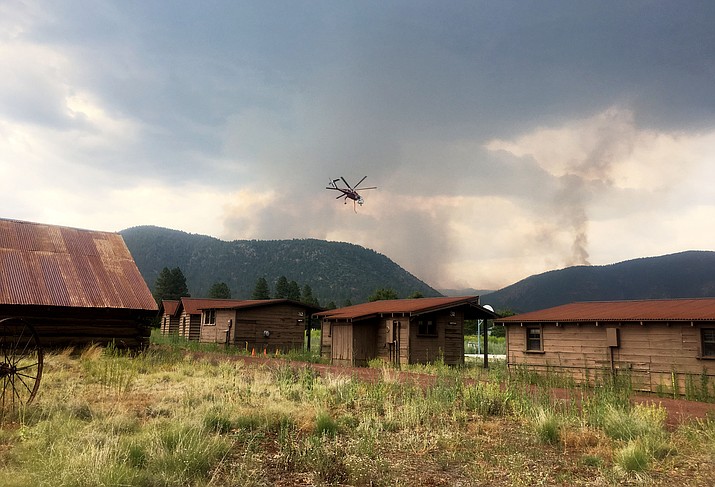 Helicopters transport water to the Museum Fire from a location near Highway 180. Gov. Doug Ducey declared a state of emergency earlier today, ensuring first responders have the resources needed to fight the fire. (Katherine Locke/NHO)

FLAGSTAFF, Ariz. — Arizona Gov. Doug Ducey has declared a state of emergency for the Museum Fire burning near Flagstaff.

The fire began July 21 and has charred an estimated 4 square miles within minutes of downtown Flagstaff. It is currently 10 percent contained.

A Red Cross evacuation shelter is located at Sinagua Middle School, 3950 E. Butler Avenue in Flagstaff. People are welcome to come to shelters for help even if they don’t stay overnight. The Red Cross shelter will remain open until evacuation orders have been lifted. (Photo/American Red Cross)

A concern now is the potential of increased flooding risks in Flagstaff neighborhoods due to the fire.

At 4:20 today, the National Weather Service issued a flash flood warning for Flagstaff communities in the shadow of the wildfire.

The weather service said up to an inch of rain already has fallen over the fire. Flooding is expected near downtown Flagstaff and along parts of Route 66.

Coconino County and Flagstaff city officials asked the public to be prepared for flooding in the neighborhoods of Mount Elden Lookout Estates, Paradise Road, Grandview Drive and Sunnyside.

The warning expires at 7 p.m.

Meteorologist Darren McCollum says the runoff is expected to be more intense because of the wildfire that's been burning around Mount Elden.

Under the state of emergency declaration, $200,000 in funding will be directed from Arizona’s general fund to be made available to the director of the Arizona Division of Emergency Management.

These funds can be used to reimburse eligible emergency response and recovery costs and ensures first responders have the resources they need.

After surveying the fire this afternoon and receiving a briefing from emergency officials, Ducey later met with displaced residents at a shelter in Flagstaff.

Fire crews are currently using trails and roads to try to corral the fire to keep it away from homes.

Earlier today, Operations Chief Todd Abel said the fire has burned more intensely because of sometimes gusty winds that quickly can change the fire's direction. He says that does pose a challenge to firefighters.

About 600 people are working the fire, along with aircraft that can drop water and retardant to slow the fire's spread.

Incident commander Rich Nieto says the fire is the top priority for resources in the region.

The American Red Cross of Greater Phoenix Chapter is continuing to support multiple residents affected by the Museum Fire. Red Cross volunteers are providing shelter, food and comfort for residents forced to leave their homes due to the wildfire.The shelter is located at Sinagua Middle School, 3950 E. Butler Avenue Flagstaff, Arizona, 86004. More information is available at RedCross.org/Shelter.

The majority of the Museum Fire is within the Spruce watershed and flood waters may flow through those areas. Beginning today and through the weekend, National Weather Service forecasts indicate that monsoon rains are more than likely each day. Flood Control officials are conducting flood assessments and preparing mitigation efforts for homes in the immediately affected area, which includes sandbags.

Residents can self-fill sandbags at two different locations, Joel Montalvo Little League Fields at the corner of Spruce Street and First Avenue and on Aztec Street near Francis Short Pond. Self-fill sandbags are available for those residents in the immediately affected neighborhoods listed above.

Pre-filled sandbags are available after noon to dusk July 23 at the Coconino High School South Parking Lot. Beginning July 24, sandbags will be available from 8 a.m. – 8 p.m. Staff will be present to verify that sandbags are disbursed only to those residents living in the affected floodplain.

Residents with questions can contact the Emergency Operations call center at (928) 213-2990. People are also encouraged to sign-up for emergency notifications for evacuation and other notices at coconino.az.gov/ready.