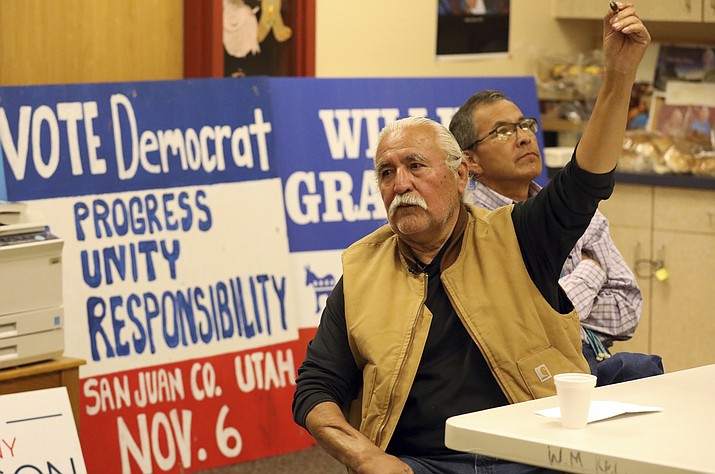 In this Oct. 24, 2018, file photo, Democratic county commission candidate Willie Grayeyes, left, speaks to a group while Kenneth Maryboy, a Navajo who is running unopposed for another seat on the commission, looks on in White Mesa, Utah. A federal appeals court on Tuesday, July 16, 2019, upheld newly drawn voting districts in a Utah county after a judge had found the old boundaries amounted to racial gerrymandering and violated the rights of Navajo voters. Since then, a Navajo Democrat, Grayeyes fought in court to get on the ballot and later won a county commissioner seat. (AP Photo/Rick Bowmer, File)

A federal appeals court has upheld a ruling that found voting districts in a Utah county were racially gerrymandered and violated the rights of Navajo voters. The 10th Circuit Court of Appeals in Denver handed down the opinion July 16, in the case that resulted in the election of the first majority-Navajo commission in San Juan County, which overlaps with the Navajo Nation. (AP Photo/Rick Bowmer)

The opinion from the 10th U.S. Circuit Court of Appeals in Denver comes after Republicans contested the new districts used in last year’s election, which created the first majority-Navajo commission in Utah’s San Juan County, near the Arizona border that overlaps with the Navajo Nation.

Republican commissioner Bruce Adams was disappointed in the ruling, saying in a statement that the new districts unfairly carve up the county’s largest city of Blanding and disenfranchised those residents. He said he had hoped for a new solution but did not immediately say if the county would appeal again.

The appeals court, on the other hand, found the new boundaries were fair. Though two of the three county commission districts and three of the five school board districts are majority Native American, voter turnout data indicate that doesn’t necessarily mean only Navajo candidates will win, the opinion said.

The voting maps only split Blanding into two districts and keeps another main town of Monticello whole, the judges found. Their ruling in the 7-year-old case is a win for the Navajo Nation, which also stretches into New Mexico and Arizona.

Leonard Gorman, executive director of the Navajo Nation Human Rights Commission, said the decision brings the county into line with jurisdictions in other states.

“That’s the only thing we asked for, was to ensure that laws are complied with,” he said, adding that the case has cost the Navajo Nation about $3 million.

In 2016, U.S. District Judge Robert Shelby found that the old voting maps were unconstitutional because they packed Democratic-leaning Navajo voters into just one of three districts in sprawling San Juan County. They make up slightly more than half the population of San Juan County.

Since then, a Navajo Democrat, Willie Grayeyes fought in court to get on the ballot and later won a county commissioner seat that had belonged to an outspoken Republican. Phil Lyman left the commission to successfully run for statewide office.