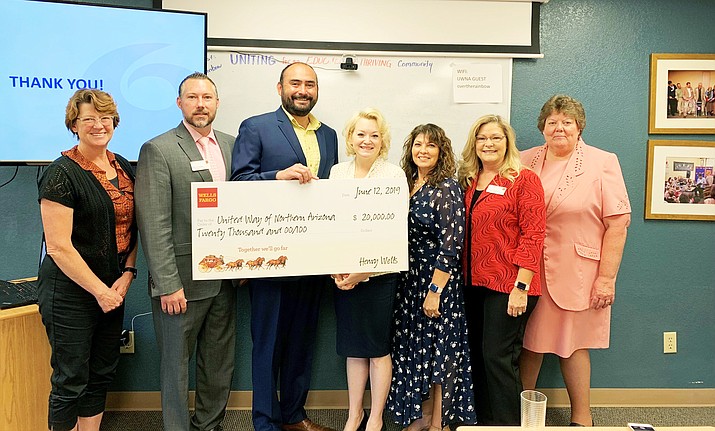 Wells Fargo is making sure local children start off their school careers on the right foot by donating $20,000 to the KinderCamp™ summer program including Kindercamps in Winslow and Page. (Submitted photo)

Wells Fargo is making sure local children start off their school careers on the right foot by donating $20,000 to the KinderCamp™ summer program.

KinderCamp, now in its 15th year, is a signature initiative of the United Way of Northern Arizona (UWNA). Incoming kindergarten students are referred to the program based on a variety of factors that indicate they could benefit from the program, which serves as an introduction to the classroom setting.

The month-long program, available at no cost to families, focuses on preparing children academically, socially and emotionally for school, said UWNA Board Chair Sylvia Johnson. While much of the day is spent on math and pre-reading skills, such as letter identification and phonics, emotional and social education also play a large part.

The initiative was first launched in 2005 after a survey identified early childhood learning as a major issue of concern in the region. The initial partnership was between UWNA and the Flagstaff Unified School District but has grown to include schools throughout northern Arizona, including Williams, Page, Lakeside and Winslow.

In addition to teaching in the classroom, each KinderCamp instructor visits the child’s parents or caretakers in the home and brings a bag of school supplies, including a literacy kit containing children’s books and learning activities for students to do at home with their family.

The cost to run the KinderCamp program is about $600 per child, with more than 250 children participating each summer.

Last year, Wells Fargo donated $444 million to nearly 11,000 nonprofits, and for the past decade it has has ranked first in workplace giving by United Way Worldwide.