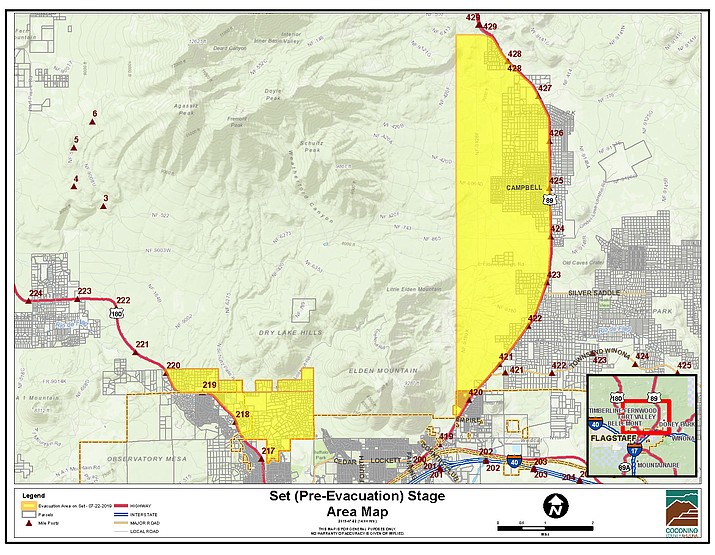 Addition areas and neighborhoods have been added to the pre-evacuation “Set” stage for the Museum Fire north of Flagstaff.

Other areas that continue to be under “Set” (pre-evacuation) are the areas of Mt. Elden Lookout Estates, north and west of Hwy 89 and Silver Saddle, Hutcheson Acres, McCann Estates all of Timberline communities including, Little Elden Springs, Black Bill Park, Wupatki Trails and

During the Set notification (pre-evacuation), residents are asked to pack any emergency items, be able to sustain for 72-hours and get information on the fire from official resources such as the Coconino County Website, Facebook and Twitter, City of Flagstaff Facebook and Twitter and the U.S. Forest Service Facebook and Twitter. A call center (928.213.2990) has been activated for people with questions. People are also encouraged to sign-up for emergency notifications for evacuation and other notices at coconino.az.gov/ready.

Coconino County Sheriff, Flagstaff Police and other Law Enforcement personnel will be going through these neighborhoods to let people know of the “Set” stage and to be ready for future evacuation orders. All Flagstaff residents should be in “Ready” stage.

Drones of any kind are prohibited from flying over the area. When an unidentified aircraft, manned or unmanned, is sighted in the fire area, all air operations must shut down immediately. This poses significant risk to fire personnel and suspends crucial air suppression

The areas are west of Highway 89 from Railhead north to Townsend-Winona, including the KOA

The Museum Fire is currently around 1,000 acres. (Katherine Locke/NHO)

Additionally, the county suggested that all of Flagstaff enter the "Ready" or "prepare now" stage.

FLAGSTAFF, Ariz. - Wildland firefighters are using every available aerial platform in the southwest region on a wildfire in the Dry Lake Hills area north of Flagstaff today. The Museum Fire, currently about 1,000 acres, was very active overnight.

Crews were not able to conduct burnout operations due to the activity and the fire spotting ahead of itself, but took indirect suppression tactics where they could.

The fire was flanked with retardant and water from more than a dozen aircraft Sunday in an effort to keep it in the Schultz Pass area and limit its spread north and south. Spotting was noted toward the east, and hand crews are working to create a fire line to work on containment that ties in with aerial suppression.

Fire managers will be using direct and indirect tactics to suppress the fire today. A heavy air component is expected as the objectives are to keep the fire east and south of Forest Road 420 (Schultz Pass Road), west of U.S. Highway 89, and north of the Pipeline Road and those communities.

Drones of any kind are prohibited from flying over the area. When an unidentified aircraft, manned or unmanned, is sighted in the fire area, all air operations must shut down immediately. This poses significant risk to fire personnel and suspends crucial air suppression tactics. If any member of the public sees someone launching a drone, please call 911. The public should also stay out of the fire area for public and firefighter safety.

Heavy smoke will be visible from Flagstaff and other local communities. The public should use extreme caution when driving on U.S. Highways 180 and 89 north of Flagstaff and stay out of the fire area.

Significant smoke will impact the Flagstaff area and communities east of Flagstaff. Smoke will settle in low lying areas of Flagstaff and surrounding areas during the cooler hours and lift as the day warms up.