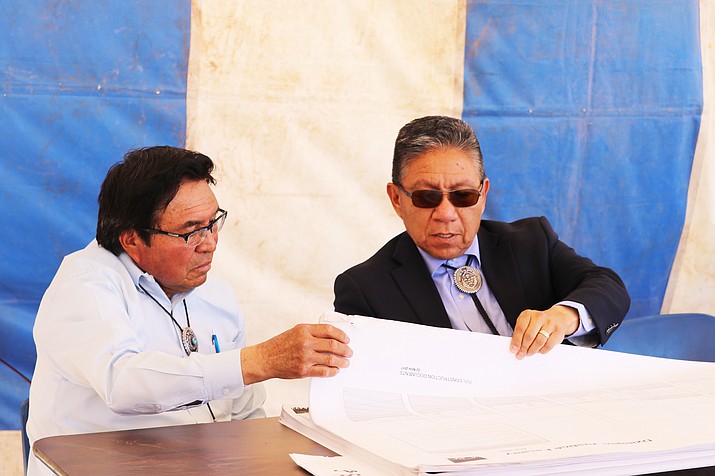 PINON, Ariz. — After years of having no facility, the Dził Yijiin Judicial District celebrated the grand opening of its new courthouse in Pinon, Arizona June 27.

This is the first time the judicial district has had its own building. Services include the court, peacemaking and probation.

The new courthouse is a welcome facility for the eight staff members of the judicial district. The court and its staff had gone back and forth between Pinon and Whippoorwill for seven years — since Dził Yijiin became its own judicial district. Most recently, the court was located in the Pinon chapter house, where space was tight and where other chapter activities were also held.

Also joining the activities was retired Judge Geraldine Benally, who was the first judge to start conducting hearings in Pinon before there was a separate judicial district for that region. The current presiding judge is Judge Rudy Bedonie, who divides his time between Dził Yijiin and Chinle Judicial District Court.

Benally began offering civil court hearings in the Pinon community to lessen the hardship for litigants after a young woman walked in one day for a hearing and Benally learned that she had hitchhiked from Pinon to Chinle for her hearing. Benally then began holding hearings at the public school about 15 years ago.

In 2012, because of the community’s advocacy and upon recommendation of then Chief Justice Herb Yazzie, the Dził Yijiin Judicial District was established through Law and Order Committee resolution to serve Black Mesa, Forest Lake, Hardrock, Low Mountain, Pinon, Tachee-Blue Gap and Whippoorwill Chapters.

Lizer called the new courthouse a “great step forward for the community of Pinon.”

During her remarks, Chief Justice Jayne acknowledged the Executive and Legislative Branches as well as the local chapter for their efforts getting the building up and running. She also thanked the Pinon Chapter for taking in the Dził Yijiin Court staff and the staff themselves for working under the conditions of having no facility.

“We see this as a step to a bigger place,” Jayne said.

Chapter President Bessie Allen also spoke about the vision of having a larger facility — one that would house both judicial and public safety — and showed the blueprints for such a facility to the leadership at the celebration.

She commended the court staff, saying that other people might say that they couldn’t work under the conditions.

“These folks weren’t like that. Very few people are that dedicated,” Allen said.

Navajo Nation Council Delegate Jimmy Yellowhair reflected on the history of the courts during his 28 years working for the Judicial Branch and spoke about each of the Chief Justices that he worked for starting with Tom Tso and the changes he saw happen in the Branch including funding and the building of judicial/public safety complexes. Yellowhair said he became a councilman to improve the judicial system.

Arlene Lee, court administrator for Dził Yijiin said the court has been averaging at least 60 visitors a day.