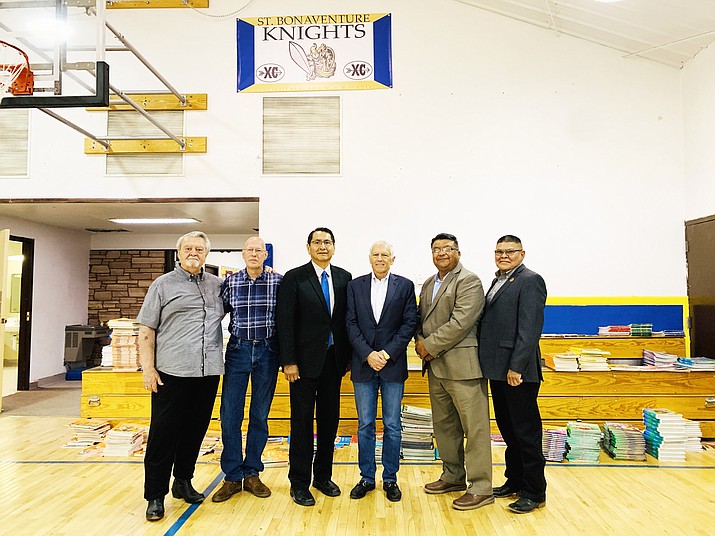 Clark met with Nez and council delegates at St. Bonaventure Indian Mission and School in Thoreau, New Mexico to discuss potential renewable energy development within the eastern region of the Navajo Nation.

Clark is a retired four-star general of the United States Army and serves as an entrepreneur, educator, writer and commentator. He remains active in the areas of energy, alternative energy, corporate and national security, logistics, aerospace and defense and investment banking. He also serves on various corporate boards throughout the country and has been awarded the Presidential Medal of Freedom, Defense Distinguished Service Medal, Silver star, bronze star, purple heart, honorary knighthoods from the British and Dutch governments and numerous other awards from other international governments.

“It’s an honor to welcome General Clark to the Navajo Nation to discuss potential investment in renewable energy and technology. The time is now for our Nation to transition and prioritize clean, renewable energy. Our people, especially the younger people, want change and that’s what the Nez-Lizer administration is committed to. Therefore, we are initiating discussions to move forward with a diversified economy,” Nez said.

“The country, including the Navajo Nation, needs to move towards a better and long-term investment in renewable energy. The Nation has the capabilities to meet the country’s energy challenges and combat the threat of global warming,” Clark said.

In April, Nez and Lizer issued a historic proclamation, known as Navajo Hayoołkaał or Navajo Sunrise, stating the Nation will pursue and prioritize clean, renewable energy development for the long-term benefit of the Navajo people.

The proclamation states that the administration will prioritize providing off-grid solar-generated electricity to Navajo households that do not have power and building a new community and utility-scale clean energy projects. Once this economic engine is established, the Administration will continue to secure new investment and new jobs through ancillary industries like the assembly of solar panels and racking systems, further solidifying its role as a leader in the clean energy market.

During the discussion, Delegate Yazzie noted the need to establish partnerships with entities and individuals such as General Clark, for the Nation to move in the direction of renewable energy development, especially in the state of New Mexico.

Nez also referenced the “Energy Transition Act” in the state of New Mexico, which was approved by the New Mexico Legislature and signed into law by New Mexico Gov. Michelle Lujan Grisham, requiring public utilities to acquire renewable resources until electricity generation is 100-percent carbon-free by the year 2045.

The bill also set aside funds for workforce development and economic development opportunities, including $2 million for the Navajo Nation, which the Nez-Lizer Administration intends to use for a solar energy development project at Paragon Ranch in New Mexico.

“The world around us is moving ahead with clean energy, and the Navajo Nation cannot afford to be left behind, especially when we have many sources of clean energy that can be harnessed to benefit our people. Our Nation has great potential to become energy independent,” Lizer said.