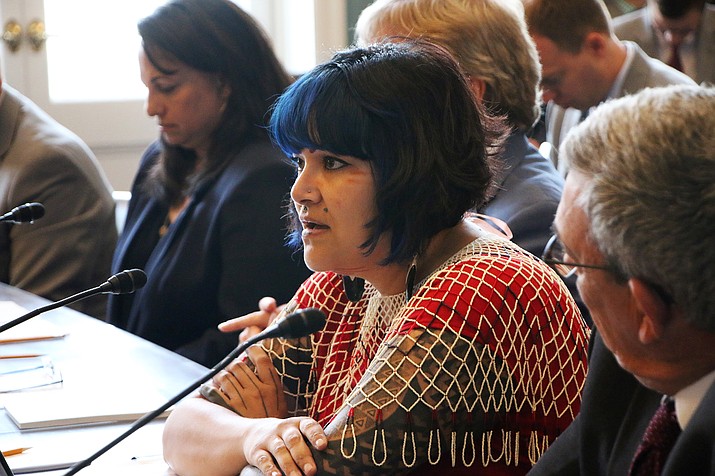 Havasupai Councilwoman Ophelia Watahomigie-Corliss said her tribe has made some progress on internet connectivity but it — like other residents of rural areas — is in danger of being left behind without broadband. (Photo by Miranda Faulkner/Cronkite News)

WASHINGTON — The Havasupai tribe is falling behind in education, health and emergency needs because, like many rural communities, it lacks affordable, reliable and high-speed broadband, a tribal councilwoman told a House committee July 11.

Ophelia Watahomigie-Corliss was one of several witnesses who said rural areas are in jeopardy of being left behind without the high-speed internet access of broadband, which is used for everything from telemedicine to distance learning to up-to-the-minute market reports for farmers.

“Community members can better their lives and their education through future broadband expansion,” Watahomigie-Corliss said in testimony prepared for a House Agriculture subcommittee. “These services that ordinary Americans have been using for the past 20 years are still not a reality for my entire community, but this is the first glimmer of hope we have seen for decades,” she said of gain the tribe has made recently after decades of effort.

The Havasupai are among 24 million Americans in rural communities that lack infrastructure for high-speed broadband that is critical to survival, said Rep. Austin Scott, R-Georgia.

“Big data and artificial intelligence, cloud storage and computing, the internet of things and data analytics, telemedicine, and other modern tools cannot be replicated without broadband access to the Internet,” he said.

The July 11 hearing was called to find out “what’s being done well … and what work remains” to bring broadband to rural communities,” said Rep. David Scott, D-Georgia, the subcommittee chairman who called the meeting.

Witnesses talked about gains that have led to adequate service but leave much to be desired, with systems being overloaded or freezing at critical moments. They pointed to increased funding for rural broadband and other changes included in the 2018 farm bill, but added that more changes are needed to let the Agriculture Department “better target its limited resources to the rural communities most in need,” in the words of Rep. Mike Conaway, R-Texas.

The Havasupai live on the floor of the Grand Canyon in an extremely isolated area that is only accessible by horseback, helicopter or an 8-mile hike — with a trailhead that is 67 miles to the nearest town. Watahomigie-Corliss called it “the definition of rural.”

But that doesn’t mean empty: Besides the 398 people who live year-round in the village of Supai, the community and its waterfalls attract 35,000 tourists a year, which requires the ability to provide efficient healthcare and emergency services.

“We do not have good emergency communication capabilities to the furthest gorge that tourists like to visit, and their safety is our responsibility,” Watahomigie-Corliss told the committee. “Navigating the canyon can sometimes be a life-or-death situation if someone gets lost.”

The village population rises to 423 in summer, when children return home from school: Since Havasupai schools only go to eighth grade, tribal youth have to leave Supai and go to boarding school if they want to earn a high school diploma. That can be difficult for tribal children who may be “unable to adjust … and return to the village, never going back to their studies,” Watahomigie-Corliss said.

Efforts to set up online courses for students had faltered. But Watahomigie-Corliss said the tribe has recently secured a 30 megabits-per-second connection and set up an equipment checkout program that helped prompt its first successful online classes.

“While we have had success, we also have more needs,” Watahomigie-Corliss said.

She said the tribe plans to expand service to “bring broadband coverage to the whole village, increase backhaul from 50 Mbps to one Gbps (gigabit per second), provide emergency communications throughout the canyon, connect an online charter high school and allow for telemedicine in the new clinic.” And her tribe is not alone, she said.

“The disparities felt by my community may be of the most extreme examples felt by rural tribal nations, but the disparity of the digital divide are being felt all across the Indian Country,” Watahomigie-Corliss told the committee.