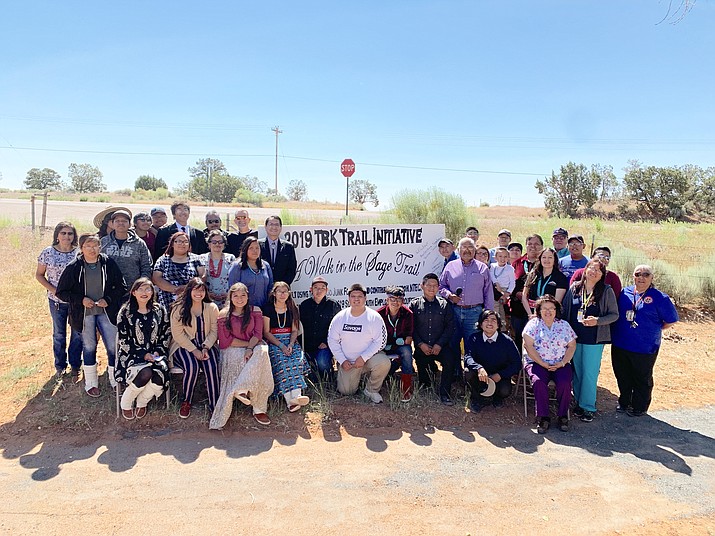 The project, known as the 2019 Ts’ah Bii Kin Trail Initiative, was completed by a group of 20 Navajo students who are part of the chapter’s summer youth employment program, using revenue collected through the Navajo Nation’s two-percent tax on unhealthy foods and beverages, commonly known as the “junk food tax.”

The summer youth employees constructed the 0.8-mile graveled trail over the course of three weeks, which surrounds the perimeter of the chapter. The project was also partially funded in partnership with the Navajo Transitional Energy Company, LLC.

Nez thanked the summer youth employees, many of whom returned home to work at the chapter for the summer break, for taking on the challenge of promoting healthy active living in their community.

“As young Navajo people, you have practiced and demonstrated one of the most important Navajo principles and teachings of T’áá hwó’ ajít’éeg, or self-reliance and self-determination, in order to help your peers and community. Thank you for stepping forward to make a positive difference for our people,” Nez said.

“This is a creative and inspirational project that the youth have completed within a short timeframe. The youth of Ts’ah Bii Kin Chapter have set an example of how the tax revenues from the sales tax on unhealthy foods and beverages can be used to change the lives of our people by providing resources to live healthy lives,” added Vice President Myron Lizer.

The Healthy Diné Nation Act of 2014 included a sunset clause provision that calls for the two-percent tax to end in 2020, however, Nez and Lizer said they will advocate for an extension of the sales tax to help chapters throughout the Navajo Nation promote healthy and active living.

“A Walk in the Sage Trail” in the community of Ts’ah Bii Kin is now open to the public.