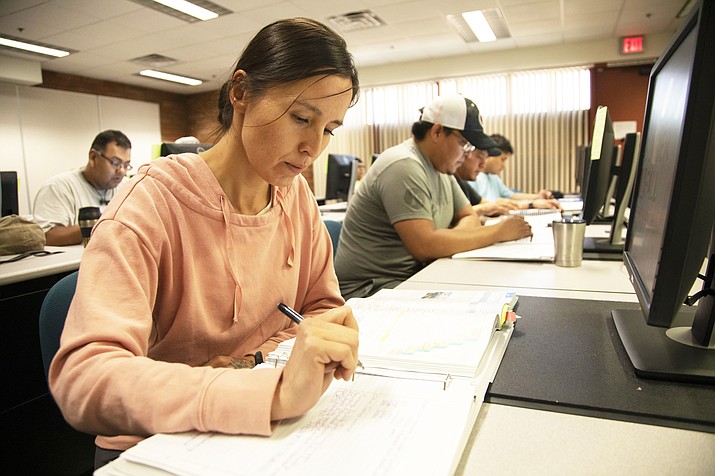 Nicole McCarty is a NGS worker being retrained to work as an IT business analyst for SRP with the help of a program being taught at Coconino Community College in Page. (Photo/CCC)

PAGE, Ariz. — Nicole McCarty began working at Navajo Generating Station 15 years ago. Until recently, she was a Control Room Operations Specialist for the coal-fired power plant.

“I went into the job when I was 18,” McCarty said, adding that she had a 2-year-old daughter at the time.

With her daughter now 18 and the plant slated for closure by the end of the year, McCarty will continue to work for Salt River Project thanks to the creation of one of the state’s first tech-apprenticeships, called Apprenti. The innovative retraining program is being taught in Page at Coconino Community College by instructors from both CCC and Northern Arizona University.

Apprenti was introduced to SRP through the Greater Phoenix Chamber Foundation in early 2018. It became a solution to address the redeployment effort of NGS employees into Phoenix-area positions. SRP partnered with Apprenti, a 501(c)(3) nonprofit operated by the Washington Technology Industry Association, to reskill NGS employees for mid-level IT Business Analyst positions. Apprenti is a registered apprenticeship program for careers in technology. The Apprenti model is meant to “provide a proven, reliable pipeline for underrepresented groups such as minorities, women and veterans to gain training, certification and placement within the talent-hungry tech industry,” according to information from Apprenti.

McCarty is one of 10 NGS employees being retrained to be an Information Technology Business Analyst at SRP. The goal is to train the apprentices to identify tech challenges in business, find solutions to those challenges and implement solutions. All 10 NGS employees participating in the Apprenti program at CCC will remain SRP employees while they undergo three months of intense classroom instruction, plus another year of on-the-job training at an SRP facility in the Valley. After successfully completing the apprenticeship requirements, each apprentice will become Journeyworker-level IT Business Analysts and start their new tech career with SRP.

McCarty said the process to be accepted into the apprenticeship program began with testing, which centered primarily on math, social skills and critical thinking. After passing the testing phase, she and the other candidates applied to the program, submitted resumes and letters of support, and they were interviewed.

Kay Leum, executive director of Extended Learning at CCC, said that the pilot Apprenti program for Arizona involves many partners, including SRP, WTIA and the Northern Arizona College Connection, which is a consortium of four Arizona institutions consolidating education efforts in far northern Arizona. For the Apprenti program, instructors from Coconino Community College and NAU are leading the classes at CCC in Page.

Until mid-July, the apprentices are being educated five days a week in Computer Information Systems, Business Writing, Project Management, Business Analysis, Public Speaking and Computer Databases. In total, the apprentices will earn 18 hours of college credit before they head off to their on-the-job training.

Nathan Huenemann started with NGS 10 years ago. His last assignment was Operations and Maintenance, Level III. He’s also in the new apprentice program.

“I held out hope as long as anyone could have,” Huenemann said of the power plant’s fate, until it became a reality. “It was a definite feeling of loss.”

He said he is grateful to SRP for making it possible to start another career without a college degree. Of course, he is doing his part to get into the program and succeed.

“We don’t take it for granted,” Huenemann said, adding that all of the students are currently earning A’s in their coursework. “We’ve all been so fortunate. Whatever happens, I think we’ll be able to handle what gets thrown at us.”

McCarty said, “I’ve always been super curious about computers and how they work and why they do what they do.”

She’s also getting computer programming experience, which she finds fascinating.

More information about Apprenti is available at apprenticareers.org.