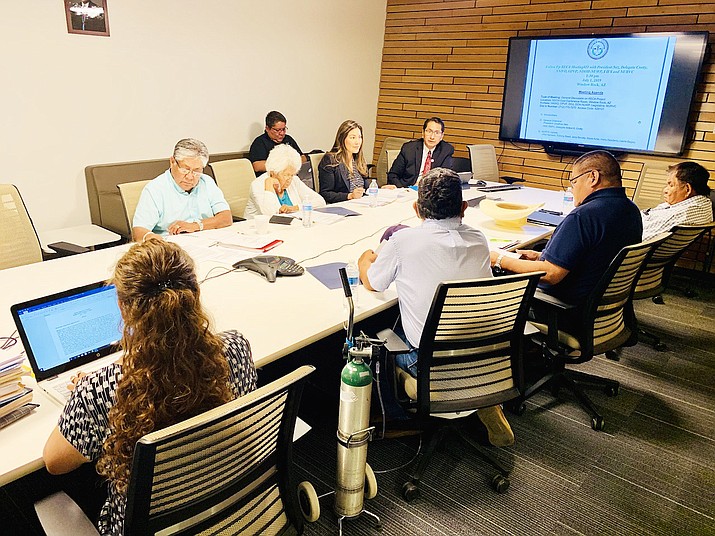 The Nez-Lizer administration affirms support for a bill to amend and update the Radiation Exposure Compensation Act, which would include providing benefits to downwinders. (Office of the President and Vice President)

WINDOW ROCK — On July 1, Navajo Nation President Jonathan Nez and Navajo Nation Department of Health Executive Director Dr. Jill Jim met with former Navajo uranium mine workers who are part of the Navajo Uranium Radiation Victims Committee, to reaffirm the Nez-Lizer Administration’s support for a bill to amend and update the Radiation Exposure Compensation Act, or RECA. The update would expand certain provisions, including providing benefits to “downwinders” and former uranium mine workers.

RECA was first enacted in 1990 and in 2000, the act was amended but did not include provisions for certain states, post 1971 miners, certain types of cancers, expansion of benefits and downwinders. For many years, a group of former Navajo uranium miners has worked with members of the House and Senate, as well as leaders of the Navajo Nation, to pass a new bill that would include amendments to provide the necessary benefits.

“We have many of our own people who are still suffering and many who have passed on due to uranium exposure in one way or another, and it’s the responsibility of the federal government to clean-up the abandoned mines as well as to provide compensation to those who are impacted,” Nez said. “Our people have waited too long for the passage of a bill to update the Radiation and Exposure Compensation Act — the time is now to pass this bill for our people.”

Nez said new bills to propose RECA amendments in the House and Senate are forthcoming, adding that he and Vice President Myron Lizer would continue to meet with House and Senate leaders to offer their support and advocacy.

In June of last year, during his term as Vice President of the Navajo Nation, Nez and Council Delegate Amber Kanazbah Crotty led a delegation of former uranium mine workers to Washington D.C. to advocate for RECA amendments. President Nez also provided testimony before the U.S. Senate Committee on the Judiciary in support of the former uranium workers.

With the assistance of the Navajo Nation Washington Office, Nez and Navajo Nation Vice President Lizer have met with numerous House and Senate members in recent months to advocate for support of the proposed changes to the RECA Act. On June 21, Nez and Lizer issued a letter to members of the Senate Committee on Indian Affairs to request a hearing on the legacy of uranium mining in Indian Country.

During the July 1 meeting, Nez was joined by chair of the Navajo Nation Council’s Health, Education, and Human Services Committee Daniel Tso and Council Delegate Amber Kanazbah Crotty as he listened to the former uranium mine workers speak about their lost loved ones, many of whom were diagnosed with cancer due to uranium exposure. They also reflected on the many hardships and struggles associated with health problems they cope with each day.

“The Navajo Uranium Radiation Victims Committee has done tremendous work in advocating for amendments to RECA. This bill needs to address challenges such as specialized care and accessing documents to verify employment and marriage licenses for benefits. Post 1971 uranium miners are currently excluded and they need to be compensated and provided health care,” Crotty said. “Our Navajo people have suffered the consequences of uranium mining, and we need to see to it that they have just compensation.”

The Navajo Uranium Radiation Victims Committee members that met with Nez July 1 included Phil Harrison, Tommy Reed, Jerry Benally, Marie Kirlie, Harry Desiderio and Leslie Begay. The former mine workers are expected to join the Nez-Lizer Administration as they meet with House and Senate members later this month to support the proposed amendments.