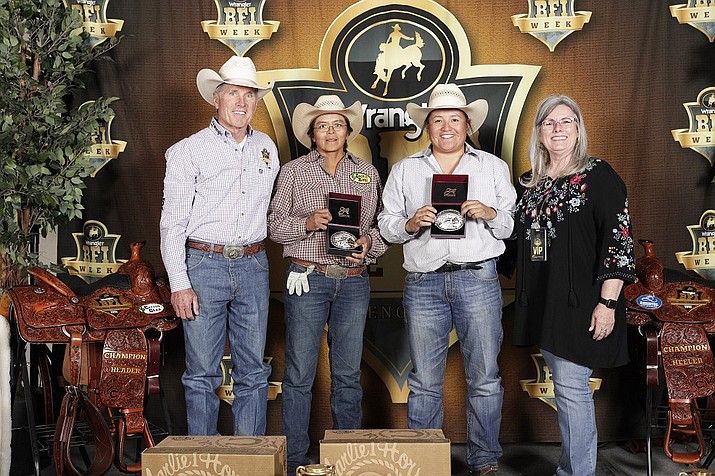 RENO, Nev. — A pair of Navajo “sisters” made the 12-hour drive from Arizona to Reno, Nevada, to out-rope nearly 160 teams by just one-hundredth of a second in the annual Charlie 1 Horse All-Girl Challenge, June 27 at the Wrangler Bob Feist Invitational (BFI) week.

The event, presented by Yeti, kicked off in Reno June 22 and was anchored by the 42nd Annual BFI June 24. One of the main highlights of the week, the Charlie 1 Horse All-Girl Challenge team roping, was live-streamed on www.wranglernetwork.com

Debbie Robbins of Winslow and Danielle Lowman of Mesa, both No. 5 ropers, roped their first three steers in 24.58 seconds to lead the pack into the short round by almost two seconds. Despite a penalty on the fourth steer, they squeaked into first place in the aggregate on four over Alabama’s Beverly Robbins and Jesse Remsburg. Beverly Robbins (no relation to Debbie), also placed fourth with another partner to earn a Reno total of $9,688.

“I wanted that buckle here,” said Debbie Robbins. “And I’m going to ride that saddle.”

She and Lowman share a grandmother and grew up about 45 minutes away from each other in the Navajo Nation.

“Before we came out here, I told her, this time let’s not practice as hard as we usually do,” said Lowman, 26, a four-time Indian National Finals Rodeo qualifier. “‘Let’s go over there and just win it all and come back.’”

Debbie Robbins, then, didn’t rope at all in the week leading up to the event. She grew up roping sheep at her grandmother’s house on the Navajo reservation. Since then, she’s become an Indian National Finals Rodeo breakaway champion and the 2007 Womens’ Professional Rodeo Association world all-around champion.

“I’d say our practice runs worked out pretty well here today,” Debbie said. “This is a good roping — all the tough girls are here.”

Danielle sometimes works in construction near Gilbert and competes in rodeos for a living, while Debbie takes care of her dad and rides and trains several horses a day. She practices on Corriente cattle that she and her brothers and cousins raise and contract to rodeos.

“BFI Week in Reno is a great place to have an all-girl roping,” said Mary Jane Carpenter, marketing director for Charlie 1 Horse’s parent company, Hatco. “Girls’ breakaway and team roping just keeps growing. We love being part of it. The hats have become so fashionable outside the arena, with celebrities like Runaway June being fans, that it’s fun to see them worn in the arena, too.”

Lowman, riding her heel horse, also placed seventh in the aggregate of the breakaway with a three-head time of 10.04 seconds to win the $2,500 cash bonus and trophy Gist spurs awarded to the Charlie 1 Horse all-around champion during BFI Week. Her total haul in Reno was $17,450, all on a 9-year-old mare she calls Boots that she raised on the Navajo reservation and trained herself.

“I just tried to make sure I caught my last calf,” said Lowman. “I was shooting for the all-around bonus. It’s pretty tough to go against Jackie and pull that off. Now I know I can hang with her.”

Because of the Charlie 1 Horse All-Girl Challenge in Reno, Nevada, this year, breakaway ropers were also showcased for the first time ever during a performance of the “Wildest, Richest Rodeo in the West.”

The Reno Rodeo celebrated its 100th anniversary this year as one of North America’s most prestigious events, crowding the rodeos in San Antonio and Fort Worth, Texas; Cheyenne, Wyoming; and Pendleton, Oregon as one of the six richest regular-season venues in the sport. On June 27, the top five from Wrangler BFI Week’s 2019 Charlie 1 Horse event at the same venue roped in that night’s Reno Rodeo for a winner-take-all cash prize of $1,000 put up by Hooey Brands and the Reno Rodeo just after the tie-down roping.

The landmark move comes just two years after Reno’s All-Girl Team Roping – held since the 1990s in conjunction with the Bob Feist Invitational – added a breakaway event and started the trend sweeping professional rodeo. Soon thereafter, RFD-TV’s The American rodeo followed suit, as did a handful of PRCA rodeos and the WCRA.

“It’s so cool,” said Crawford, a 14-time world champion in the Women’s Professional Rodeo Association (WPRA). “I love that these big rodeos are giving girls another event that’s fast-paced and uses some of the same skills as the guys.”

In Reno, Crawford had roped three calves in 7.89 seconds to win the Charlie 1 Horse Breakaway Challenge and $7,000 cash plus the custom Cactus trophy saddle, buckle, and plethora of other BFI Week prizes. She clocked the fastest time of the short round — a 2.3-second run — despite a calf that ducked right.

“I’ve been one out of the money a lot lately, so I’ve been working on being aggressive,” she said. “Breakaway is getting so tough that you cannot back off — not if you want to win — but even if you want to place anymore. I had to hit that start and get it on him.”

She led the top five into the Reno Rodeo that night and roped last. Her longtime nemesis, fellow world champ Lari Dee Guy, was leading for the $1,000 with a 3.9-second run when Crawford thrilled the crowd with a 3.8 to win the prize.