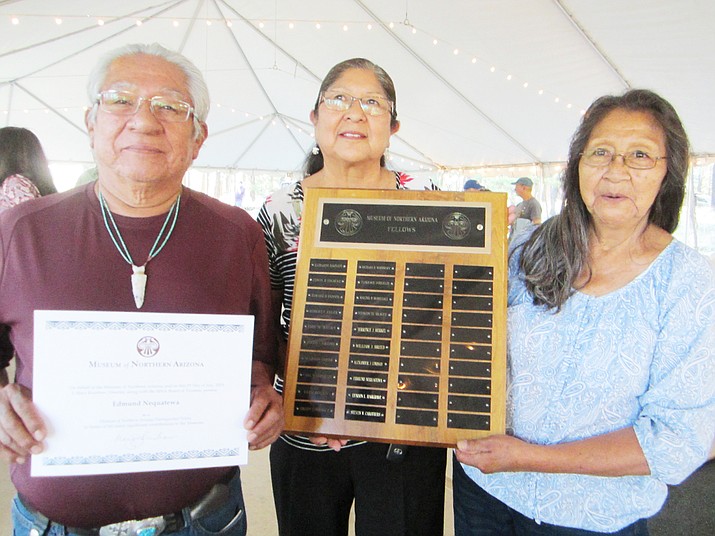 FLAGSTAFF, Ariz. — Edmund Nequatewa was awarded as a Museum of Northern Arizona Distinguished Fellow July 5 — this is the highest honor the museum bestows and the first time the honor has recognized one of the Hopi founders of the museum.

MNA Executive Director Mary Kershaw The award was announced during the members preview at the Hopi Festival of Arts and Culture held July 6-7 at the Museum of Northern Arizona.

“Without Edmund’s help, this festival might never have started,” Kershaw said. “He was the one who convinced Hopi artists to send their best work to the new Museum of Northern Arizona for the first Hopi Craftsmen Show in 1930. Edmund also aided many MNA researchers as interpreter of language and culture. He was an ethnologist, a philosopher, a wise counselor and a folklorist.

Expedition to Shipaulovi — Mary-Russell Ferrell Colton, Eddie McKee, Edmund Nequatewa, Ferrell Colton, Katharine Bartlett (1938). Nequatewa was awarded as a MNA Distinguished Fellow, the highest honor the museum bestows. This is the first time the honor has recognized one of the Hopi Founders of the museum. (Photos courtesy of Museum of Northern Arizona archives)

The award ceremony was attended by Nequatewa’s son, Tyson, who accepted the award for him, his sister-in-law Verlie Lomastska and great grand-daughter Debbie Onsae.

“I’m really proud of my dad to get the award,” said Tyson Nequatewa after the ceremony. “I learned a lot from him.”

The museum had tried to find any of Nequatewa’s relations back in January when the new MNA Distinguished Fellows were approved by the board. But they had no luck.

By chance, a woman came into Kristan Hutchison’s office (she is the director of Marketing for the museum). The woman saw the signed copy of “The Truth of a Hopi,” which was written by Nequatewa and told Hutchinson that Nequatewa was her grandfather.

“That book is like the Bible in my family,” said Onsae after the ceremony. “It is on our shelf (when one of her daughters hasn’t borrowed it). Whenever the girls have questions about teachings, I say, ‘Go get that ‘Truth of a Hopi’ book. They would read the book over and over again.”

As a folklorist, Nequatewa was a teller and writer of stories but the kids were too young to hear some of them. Tyson said that he didn’t hear all the stories from his father and he was 19 when Nequatewa left.

“That time, I remember the elders would just be talking and you left them alone in a huddle talking,” Onsae said. “Lo and behold, they were probably talking about Hopi culture and teachings and lessons, but we were just little kids. And Tyson was probably, too and we never really got the teachings.”

Onsae said while they may not have gotten the teaching personally and verbally, they have the book that he wrote.

“It was very important to me,” she said. “I got to know him through the book.”

“He was a strict man,” Tyson said. “But I’m really proud of my dad. Proud of my mom, too, that she took care of him.”