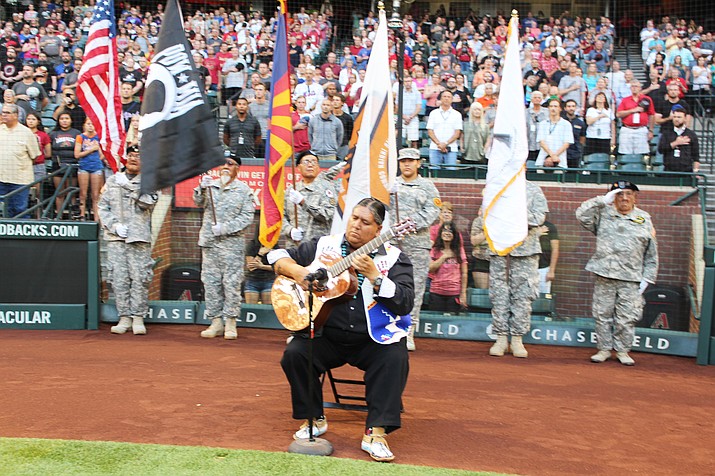 He has already done this in two major ways. First, by becoming a world renowned classical guitarist and secondly by never using alcohol, drugs or tobacco.

“It was an honor to represent our people and I performed my own arrangement,” he said.

Ayala said playing classical music in front of a large crowd shows people the stereotype that Native Americans only play certain types of music is not true.

Ayala thought it was great that Native Americans were acknowledged at the Diamondbacks venue and said he was happy that the day recognized native students, especially those who recently played in baseball and softball tournaments.

“It was incredible that they could walk on the field and have pow wow dancers dancing on the field,” he said. “I am thankful for the Diamondbacks giving us this day. They let us take over the field for awhile. It was a great day for the community with so many people coming together. It was nice that they recognized 80 different tribal royalty who lined the first base line.”

Ayala also used the Dbacks venue to bring more attention to the issue of Missing and Murdered Indigenous Women (MMIW), as after his performance of the national anthem, he held up the back of his guitar which stated: ‘No more MMIW.’”

It has recently been highlighted that indigenous women in America have a higher percentage of missing and murdered women than any other ethnicity. Ayala said women are important to him — he was raised by his grandmother.

“It was my grandma that taught me how to be a man,” he said.

Ayala became involved with the MMIW issue six years when he was invited to speak at a gathering about the issue.

“I met the direct families that were involved and it was just so disheartening,” he said.

Ayala posted the photo of his ‘No more MMIW’ online and the response went viral with people responding from around the world. Some wanted to know what MMIW was and others sent comments of support. Responses came from throughout Indian country, overseas and from Seattle and British Columbia.

“It was my way of throwing a pebble in the pond and hoping that people get it, and they have,” he said. “I am not a spokesman. I am just one voice and will support it in any way possible.”

Ayala said people can help address the MMIW issue by writing their congressmen, posting about it and joining groups that are involved in the issue. He is organizing a concert in Manitoba, Canada, to raise awareness about MMIW and help some of the families that are trying to find answers.

After his performance of the national anthem, the vice president of the Diamondbacks told Ayala that he gave the most beautiful performance.

“That was amazing,” Ayala said about the vice president’s comment. “Because a couple thousand people have performed the national anthem for the Diamondbacks. Then she asked about MMIW and when I told her she put her hand across her heart.”

An activist for Native America

Ayala was also involved in the anti-gas pipeline protest at Standing Rock.

“As an indigenous musician I want to give back to the community and be one of the voices for the people,” he said.

Ayala said using his music to help people is more important than fortune or fame, especially since Native American issues are often not found in mainstream media.

“At Standing Rock there were 15,000 people and a lot of (people) still didn’t know about it because indigenous issues are pushed aside,” he said.

Ayala said he started playing classical music because he felt a beautiful connection to it and because it has the potential to break the stereotype.

“I wanted to showcase to the youth that they don’t just have to do pow wows. They are bound for greatness if they have perseverance and never give up,” Ayala said. “No matter how many people tell you that you can’t do something you need to keep going. I had more people tell me I couldn’t then tell me I could.”

Ayala said that when he shows up to perform today some people still ask him about his flute. He doesn’t play the flute.

“That’s a stereotype that needs to be broken,” he said.

Ayala lets people know that he has never used alcohol, drugs or tobacco because he said that is another stereotype he wants to break. Ayala has always said no because he saw the impact those addictions have had on his family and friends.

“That is not the life I want for myself,” he said. “My only addiction is music. I saw something I did not want to become or become that stereotype.”

Ayala did not come from a musical family, but his grandmother started him on music by getting him a guitar.

“When I got that guitar I knew that would be my voice, but I did not know that I would play all over the world,” he said.

Ayaal started playing the guitar when he was 15 and was enticed by classical music two years later. His high school music teacher taught him the fundamentals, but he was outplaying that teacher within a couple years. Then he became a music major at Texas A & M, where he was told he should be an education major. That encouraged him to practice 14 to 16 hours a day in order to exceed his expectations. It wasn’t long after that, when at the age of 19 he became the youngest adjunct music teacher at Texas A & M while still taking classes.

“My teachers were my colleagues,” he said. “Now, my reality has surpassed my dreams,”

Ayala went on to earn an MA in music performance from the University of Arizona. He has taught music to kids from elementary school through college. He continues to teach in the master class settings when he’s not touring.

Ayala has performed in many famous venues, but his favorite was playing for the Pope in St. Peter’s Square in front of a crowd of 150,000 people.

“You could not see the end of the crowd,” he said.

Ayala has performed at the John F. Kennedy Center for the Performing Arts, National Museum of American Indian and the Musical Instrument Museum.

Ayala has won many awards, but his favorite so far is the Native American Musician of the Year in 2009. He is the only soloist and the only classical musician to win that award. He hopes to win a Grammy one day and made it to the first round of the Grammy’s once.

“I’m still young enough that I have time to win it,” he said.