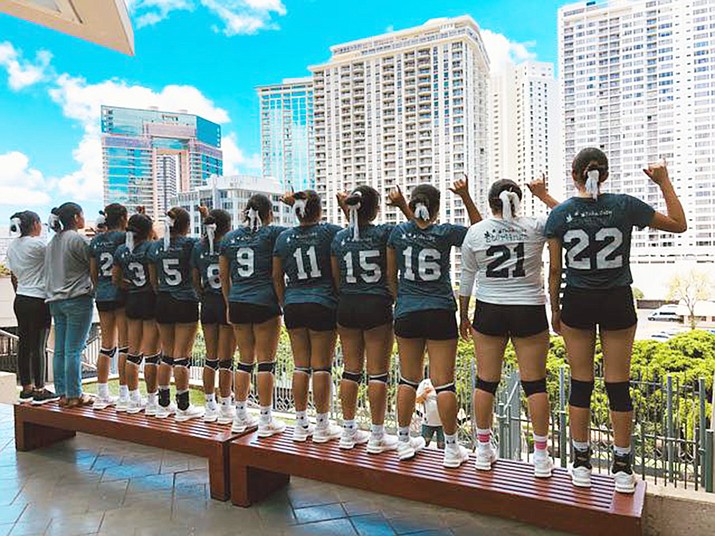 The team finished the tournament 7-1, losing only one game to Mauloa 18s, a highly-skilled team that has all its players signed to play Division 1 college volleyball at schools in Texas, North Carolina and Iowa. Despite these challenges, Tuba City won the tournament championship.

“We played a tough 17s team from New Zealand. Every point was hard earned on both sides of the court,” said Head Coach Barlow of the Tuba City Starlings. “It was intense and the girls pulled through to win together. This is where we had to play smart volleyball and competitive volleyball.”

Coach Barlow explained the New Zealanders were tall girls and they had to work extra hard and smart to get by them.

“There were several times when we were triple-blocked and it was the first time we saw a consistent triple block,” he said.

Jayda Chee and Gracie Henderson were both named tournament All-Tourney and both received Bose ear phones as their awards.

“I’m glad we came to this tournament, we saw consistent and perfect forms of volleyball. [The] girls have been playing since birth and they have their skills down,” said Coach Barlow.

Coach Barlow explained his girls studied the other teams and their weaknesses quickly.

“We made adjustments, saw weaknesses and used that. The confidence our girls had in each other [and] the compatibility they had is how we won this game,” he said. “We didn’t work this hard to not come this far.”

Barlow said it was a great experience and another highlight of the trip was when the announcer introduced the team as a team from the Navajo Nation in Arizona.

“That sent chills down my back!” said Barlow. “Knowing that girls from our [reservation] can compete onstage at the Aloha Summer Classic with hard work, compassion and commitment.”

The team is on a roll and not resting during a tough offseason tournament schedule. The team traveled to San Diego after Hawaii to participate in the Starlings National Volleyball Tournament June 21-23 and is also playing at the Volleyball Festival International Championships in Phoenix June 27-30.

April Clairmont, director of the Tuba City Starlings, also traveled to Hawaii with the team and said the girls had to step up their game to compete and win.

“The level of fundamentals among the different teams in the tournament was impeccable, nothing touched the floor, everyone was in full pursuit to receive the ball,” she said.

Assistant Coach Elijah Begay said “it was an experience like no other.”

“All teams came to play! It was amazing to see their volleyball knowledge and skills,” he said. “We knew it would be challenging, we came together at the right time and we fought our way to the win!”

The trip for the girls was an experience of a lifetime.

“The Hawaiian Aloha Classic Tournament was one of the best volleyball events I have attended,” said Gracie Henderson, a setter on the team. “The competition was challenging, my team and I learned a different style of play. The people are amazing and the land unbelievably beautiful.”

Jayda Chee, a middle-hitter on the team, said it was an experience that she will never forget.

“It’s truly an honor to have been a part of the Aloha Summer Classic Tournament. It tested the limits of not only our physical play, but our mental play,” she said. “The whole experience brought us closer as a family. I adored the amazing people that we met along the way. And the island‘s beauty was breathtaking.”

The trip would not have been possible without the support of family, friends and the community who contributed to their fundraising efforts.

“I cannot thank my family, friends, fans and supporters [enough] that helped us young Native women visit the island — it was a blessing,” said Chee.

“Our trip to Hawaii [was] one busy adventure,” said Barlow. “I want to thank everyone who made this trip happen, the parents who put in the work to allow their girls to attend the Aloha Summer Classic, the girls themselves who went out to fundraise and sell anything and everything, and the people who donated.”

Barlow also thanked his coaches and the club director who all had ideas for fundraising, including a basketball tournament.

“The take-away is the trip to Hawaii and the memories we all made.”