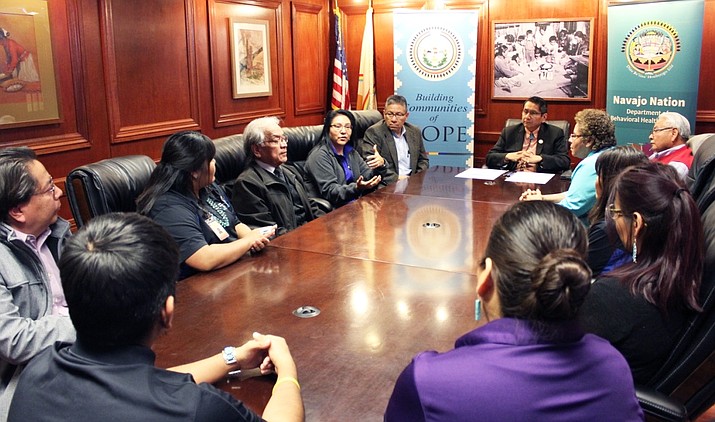 “During the Inaugural Address last week, I stated that behavioral and mental health is a top priority for the Nez-Lizer administration, so the signing of these documents is the first step to addressing issues related to suicide prevention,” Nez said.

The Executive Order requires suicide prevention training for all employees of the Navajo Nation in order to promote and improve awareness, response and post-vention. The Staff Development and Training Center will implement the “Question, Persuade, Refer” suicide prevention training into the new employee orientation and on a regular basis throughout the year to educate employees on the signs and symptoms of suicide.

“On the campaign trail, we treated this as a major initiative to help the Navajo people. We need to focus on showing the people that we care and that we have compassion for those who have lost loved ones to suicide,” Lizer said.

Second Lady Dottie Lizer also expressed her support and encouragement to educate and offer support to those who need help and thanked the employees for their hard work.

“Thank you for doing what you do, for being there to help our people who are hurting,” said Dottie Lizer, who has been outspoken on suicide prevention along with First Lady Phefelia Herbert-Nez.

Health Service Administrator Theresa Galvan expressed her gratitude for such a great opportunity to witness the signing of the proclamation and executive order, along with the Building Communities of Hope team.

The Navajo Nation Department of Health, Division of Social Services, Division of Public Safety and the Department of Diné Education will also participate and contribute to the initiative by coordinating with schools, non-profit, faith-based, traditional, tribal, federal and national organizations in implementing initiatives such as the National Suicide Prevention Lifeline.

The Office of the President and Vice President recognizes public awareness is key to preventing loss of life by suicide, and remains committed to working together to help the Navajo people.