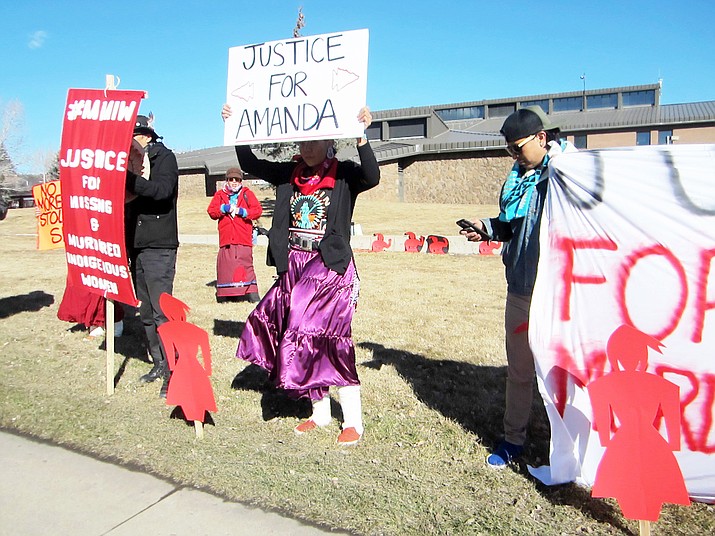 FLAGSTAFF, Ariz. — It was a cold day with a bitter penetrating wind Jan. 22 as supporters braced themselves on the lawn at city hall in Flagstaff demanding justice for Amanda Webster, a 26-year-old originally from Cameron, Arizona, who was murdered Dec. 1 in Kentucky.

At the same time, a grand jury in Kentucky was considering evidence in the case against, 32-year-old Jesse A. James, the Kentucky man arrested for her death. 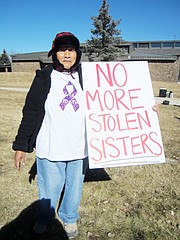 Isabelle Webster, Amanda's grandmother, from Cameron, Arizona, holds a sign at Flagstaff's City Hall calling attention to not only her granddaugter but to all missing indigenous women across Indian country. (Katherine Locke/NHO)

On Dec. 1, the Associated Press reported that police said James confessed to killing Webster in a hotel room and that he had pleaded not guilty.

Florence police told the Associated Press that 26-year-old Amanda D. Webster was found dead Dec. 1. News outlets reported James rented the room. He was arrested after giving police fake names at a cinema, where he was reportedly acting strangely.

Aurelia Webster said her niece moved to the area around three months ago. She was from Cameron on the Navajo reservation in northern Arizona.

Kayla Walker, who is from Cameron, Arizona, organized the rally. She said in a Facebook post that one of the reasons for being out at city hall was to give justice and use their voices for Amanda Webster.

“She’s kind of been a big influence on our community due to the recent events of her death,” Kayla said. “I just feel like sometimes we just really need to take a stand and be a voice for a lot of our indigenous women. And not just for Amanda, but for all women who are part of MMIW.”

Kayla said she knows there are thousands of women who go missing... and who are mostly taken from their families.

“I think this (MMIW) is a good movement and it needs to have a lot of awareness,” she said. “And a lot of shining a light on, especially around our community here in Flagstaff.”

Statistics show that Native women suffer murder rates more than 10 times the national average, according to the U.S. Department of Justice Full Report of the Prevalence, Incidence and Consequences of Violence Against Women.

A recent report from Urban Indian Health Institute, which is a division of the Seattle Indian Health Board, released a study that included urban Native people instead of only on-reservation Native women.

Supporters and family members call attention to the fight for justice for Amanda Webster and Missing and Murdered Indigenous Women Jan. 22 in Flagstaff. (Katherine Locke/NHO)

The study said that “despite this ongoing crisis, there is a lack of data and an inaccurate understanding of MMIWG (Missing and Murdered Indigenous Women and Girls), creating a false perception that the issue does not affect off-reservation/village American Indian and Alaska native communities.”

The study said 71 percent of American Indians/Alaska Natives live in urban areas and the reasons for the lack of data include underreporting, racial misclassification, poor relationships between law enforcement and Native communities, poor record-keeping protocols, institutional racism in the media and a lack of substantive relationships between journalists and Native communities.

While most of Flagstaff went about their day, Amanda’s grandmother, Isabelle Webster, from Cameron, was thankful for those who came out and have helped the family since they heard the news.

“Thank you to everybody who helped my granddaughter,” she said. “All we want is justice for my granddaughter and we’re doing all we can. I thank everybody that helped us during the time that we needed help. I will never forget my granddaughter. She was my heart. She helped me a lot. I will miss her.”

Amanda’s aunt, Treva Walker, also thanked everyone who came out to support her niece. She described her relationship to Amanda.

“She was more like a daughter to me,” Treva said. “She’d always come over and tell me she was going off to work. I always told her to watch her surroundings. She used to say, ‘I know, mom. I know. I know. I love you, I’ll be back.’ This time she didn’t come back.”

Treva said she believes Amanda is resting at ease and at peace now.

“As long as we get justice for her, we’ll be ok,” she said. “[Justice is] him put away, so he doesn’t hurt anyone else. Nobody needs to be out there wondering why he is going free…mental illness is something different to me. It is not what he claims.”

“She was a mother, she was my niece,” Treva said. “Now, her kids have no mom to come home to. Her husband-to-be was working at a different site. He’s taking it hard, we’re all taking it hard. We’re all just in disbelief still. This is something that shouldn’t have happened. It could have been avoided.”

After the rally, Kayla posted some good news for the family.

“Our prayers have been carried and heard across the states,” she said. “Melinda, an AIM (American Indian Movement) member in Kentucky had released a live feed that Jesse James has been indicted for his crimes, but our fight continues. We must all continue to be a voice for MMIW.”