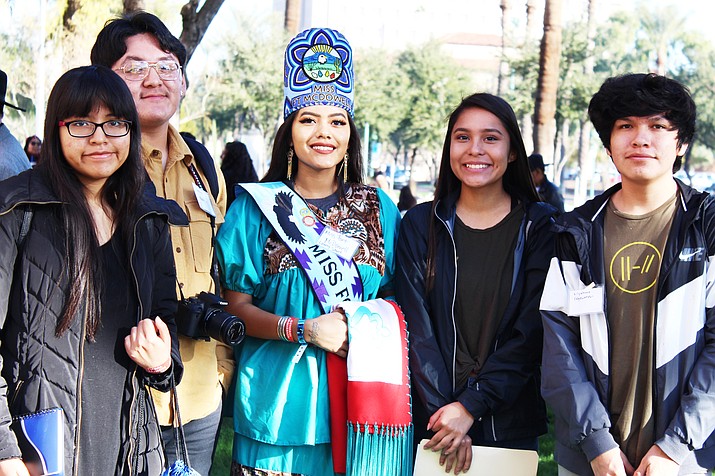 Peshlakai told them that it is hard being a Native American legislator because “it is hard for our people to come down here.”

Peshlakai said the state legislature needs to be more democratic and more open. She said her accomplishment last year was having June 2 adopted as Native American Day. She said the biggest issues in the legislative district are the pending closure of the Navajo Generating Station and funding from the state for public safety, health care and school districts.

She said Native Americans need to have faith and power to determine their own destiny. She said her daughter is a senior in high school and she hopes there are jobs for the people who are graduating.

Chairwoman Lee-Gatewood said she was humbled by serving as one of the speakers at tribal legislative day and brought the message of having rising faith and trust.

“I was getting good comments about my message,” she said.

Lee-Gatewood said the youth are the future, but need to be steered in the right direction. This is why she is starting a mentorship program on the White Mountain Apache Reservation for the high school and college students.

“It really opened up my perspective on tribal issues,” he said. “I learned the importance of tribal issues that face the surrounding tribes.”

Edgewater said Peshlakai’s speech was moving because she spoke mainly about how Native Americans can achieve what they want if they put their minds to it.

Fredericks said he learned about native empowerment and the strength of the community. He said Lee-Gatewood’s speech was powerful and resonated with him.

Ellyse Fredericks, a junior video student, said tribal legislative day was a great experience even though the session was behind schedule.

“The highlight of the trip was being able to interview Sen. Peshlakai and Chairwoman Gatewood,” she said.

Fredericks said tribal legislative day would have been improved if they served a better lunch and extended the lunch time.

“I learned that most of the speakers care about their people. They addressed some issues in their communities. It was eye opening and interesting,” she said.

“She’s one of the few women who is in government. Everything she spoke about was inspiring. It gives me the motivation to accomplish goals that seem impossible,” she said.

Brady, a junior print journalist, said tribal legislative day was fine. She said the highlight was seeing various people at the event. She said it could have been improved if the schedule was better.

“I learned how various chairmen, representatives and senators get together to talk about native issues,’ she said.