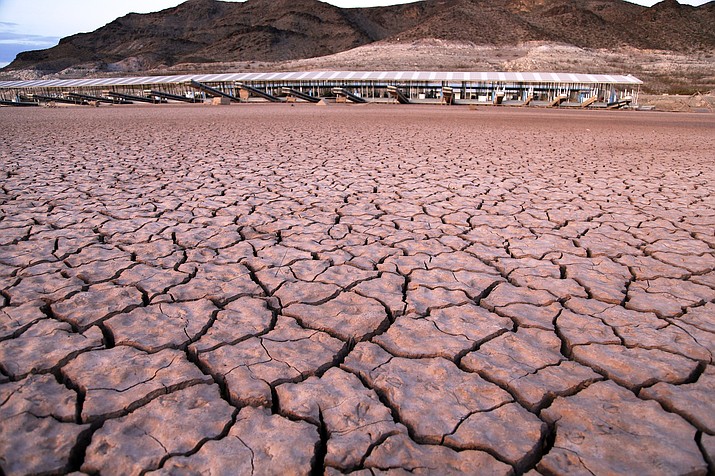 Arizona is nearing a deadline to approve a plan to ensure a key reservoir in the West doesn't become unusable as a water source for farmers, cities, tribes and developers. Other Western states are watching. The U.S. Bureau of Reclamation expects full agreement on a drought contingency plan by Jan. 31. (AP Photo/John Locher, File)

PHOENIX — The Gila River Indian Community is threatening to blow up the drought contingency plan because of efforts it says will undermine its claim to water rights.

House Speaker Rusty Bowers is proposing changes to state laws in a way he said will protect the rights of farmers in the Safford Valley who have been "scratching it out'' to water from the Gila River.

But attorney Don Pongrace, who represents the Gila River Indian Community said what Bowers proposes to do would effectively overturn and nullify a federal appellate court ruling which said those who are upstream who have not used the water have forfeited those rights.

And he said courts have ruled those rights — and the water that goes with it — belong to the tribe.

"These people are not scratching out an existence,'' he said of the farmers Bowers said he wants to help. "They've been stealing water from the community since 1870.''

More immediately significant, Pongrace said if Bowers pushes HB 2476 the tribe will withdraw from the plan for how the state will deal with the expected shortage of water coming from Lake Meade. That's crucial because the state is counting on about 500,000 acre feet of water from the tribe, much of it to help Pinal County farmers deal with the cutback in Colorado River water.

"This is a direct assault on the community's water rights,'' Pongrace told Capitol Media Services.

"It's a poison pill,” he said. "If this bill were to be considered and enacted into law the community will withdraw its prior approval (of the drought contingency plan) and, more importantly, its water.''

And he lashed out at the tribe for trying to link the issues.

"This is just showing their mentality to everybody who gets in their way,'' Bowers said. "It's all 'Our way or no way.' ''

Pongrace, however, said the community doesn't see it that way.

He said on one hand the state is seeking the tribe's cooperation and its water for the drought contingency plan. That, he said, is inconsistent with the state moving to undermine the tribe's claim to Gila River water.

He said the state can't have both.

"This is not negotiable,'' Pongrace said, saying he is speaking for tribal Gov. Stephen Roe Lewis.

"You cannot take actions like this without consequences,'' he said of the Bower legislation.

"He can decide to try to take this up and the consequence he's going to face as it stands right now, is essentially no DCP,” Pongrace continued.

At this point he believes the tribe has the upper hand.

"There is no way the drought contingency plan can be done without the consent of the Gila River Indian Community,'' Pongrace said, what with the amount of water needed to replace what the state can no longer withdraw from the Colorado River. There's also the fact that the Bureau of Reclamation has given Arizona until only the end of the month to approve the drought contingency plan or face the prospect of the agency coming up with its own alternative, one that could leave Arizona with even less water between now and 2026 than the multi-state plan proposes.

"It will really mess it up,'' Bowers acknowledged if the tribe yanks its support -- and its water. But he's not ready to give up on his legislation.

"We'll go looking for water somewhere else'' if that becomes necessary, he said.

Bowers said it's not in the tribe's interest to pull out and said the drought plan involves various interests, including the Central Arizona Water Conservation District, the federal government and the Arizona Water Banking Authority actually buying the water from the tribe.

"It's not charity,'' Bower said, with the tribe set to get more than $200 million over the six-year period of the plan. And he said there's no way the tribe could use all that water anyway.

"Anyone who says we're not using our water is simply lying,'' Pongrace responded.

He said, the tribe would do better in the long run without participating the drought contingency plan, saying it would get to keep all of its water through at least 2026.

Additionally, the tribe was trying to do its part for the greater good, only to be slapped with the Bower legislation.

"It essentially says to us, no, you're really not part of Arizona because those of us who control what happens in Arizona get to make the rules and change the rules on you so you lose your water rights,'' Pongrace said

At the heart of the dispute is Arizona water policy of who has the right to use it and when it can be lost.

"It's essentially, 'Don't sit on your rights' water law which, given the scarcity of the resource makes sense,'' Pongrace said. "It says if you don't use your water rights for a period of five years, then it can be declared forfeited unless there's a justified excuse.''

The essence of what Bowers seeks to change is a 2017 decision of the 9th Circuit Court of Appeals concluding that use-it-or-lose it law applies even to water rights first acquired prior to 1919.

Bowers said there's a good reason for the change.

He said the Gila River often floods and even changes its banks, forcing farmers to change where they draw their water and even the layout of their land. But Bowers said that latter action then requires approval by the Army Corps of Engineers, a process that can take years.

Bowers said he doesn't want the farmers to lose their rights in the interim simply because they are unable to take the water for some period.

But Pongrace said the forfeiture actions the community is pursuing -- the ones that the Bowers bill would undermine -- is designed to prevent landowners from declaring that they have the right to some river water even though they haven't been using it for decades.

"These forfeiture actions are intended to ensure that they don't try to somehow go back and resuscitate long-moribund rights and try to somehow bring those rights into production,'' Pongrace said.