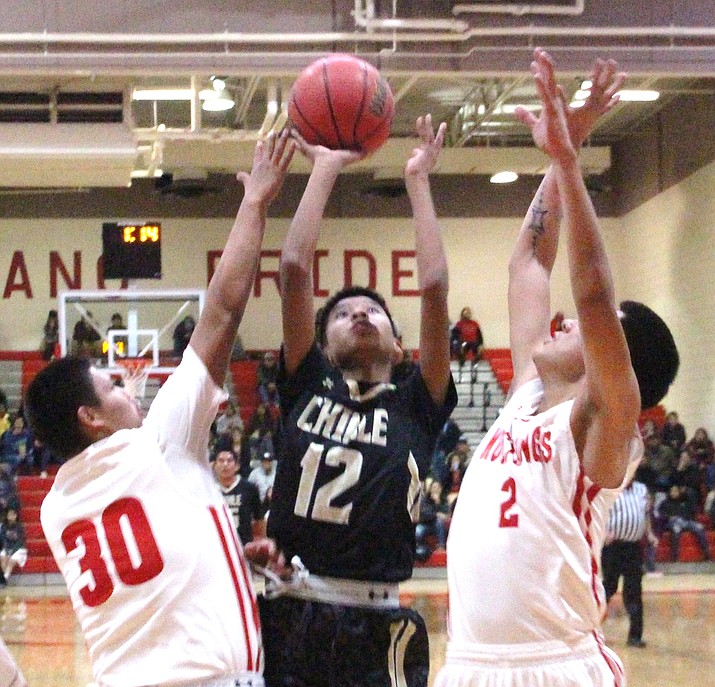 KAYENTA, Ariz. —Chalk up two more victories for the Chinle Wildcats, winning on the road at the Nash Center, home of the Monument Valley Mustangs.

For each 3A north team, each sectional win or loss can make a difference in the standings that determine the 2019 sectional playoff seedings, as well as the state tournament. The sectional tournament is scheduled to start on Feb. 7.

The Lady Wildcats (13-6, 4-3) won a closely-contested game over the Lady Mustangs ((8-14, 1-6), 51- 45. The Wildcats are in three-way tie with the Tuba City Lady Warriors and Ganado Lady Hornets for second place in the 3A sectional standing. The Page Lady Sand Devils are currently in first place.

“We want to get back on track tonight with a win,” said Mendoza. “We haven’t been playing well.”

In a pregame interview, Monument Valley’s coach Jacob Nelson said “We got to play as a team, play good defense and play good offensively.”

The Wildcats responded with senior Angelo Lewis scoring in the paint and his several trips to the charity strip; he accounted for Chinle’s first nine points, part of a 13-5 run that gave the visitors the lead for good. Chinle led 16 to 12 as the quarter ended.

Chinle picked up the offense with ball movement around the perimeter and went on a 11-0 run early in the second quarter to extend their lead by 15 points, 27- 12. The Mustangs manage d a 6-0 run that was nearly equalled by the Wildcats’ 5-2 run as the first half ended 32-20 in Chinle’s favor.

After the intermission break, Chinle coach Mendoza the team needed to do a better job attacking the zone defensive pressure, while Monument Valley coach Nelson said, “we gotta to keep playing harder, we didn’t run our offense — their defensive pressure is hurting us.”

The final quarter was won by the visiting Wildcats, 21-13 with nonstarters finishing the game. Final score: Chinle 62 Monument Valley 42.

Chinle coach Mendoza was happy with the result.

“I am happy with the results (win), we finally put it back together, like we normally do — we struggled in the first half, we did a better job in the second half.”

“We played with a lot of intensity in all four quarters, we picked it up tonight, better than the past few games” said Kylen Yazzie, Chinle’s’ freshmen starting point guard.

Lewis hit 8 of 9 free throws, plus 12 points in the paint, for a game high total of 20 points. Copper Burbank and Curtis Begay had 17 points and 10 points respectively.

“Chinle is a good team, that’s why they are number one,” Nelson said. “We played a good team, we have things to work on, we will learn from this game.” 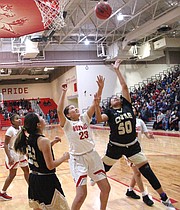 Chinle Wildcats’ Stacey Begay drives into the paint and puts up the ball for two points of her team high 21 points, duringthe road game held at the Nash Center, in Kayenta, Arizona. (Anton Wero/NHO)

Monument Valley Lady Mustang Tayla Nez knocked down a huge three point basket, bringing the Mustang crowd to its feet during a February Frenzy-like opening quarter. It was was matched by Chinle’s Grayce Claw’s three pointer — game on.

Then Chinle’s freshman post Aisha Ashley took over, scoring six straight points, which was answered by the Lady Mustangs’ seven point run. The host Lady Mustangs had a single digit lead, 10-9, as the opening quarter ended.

The other half of the Chinle Twin Towers, Stacey Begay, began to control the paint, scoring nine of her team-high 21 points in the second quarter. Not to be outdone, Monument Valley’s Nez, who was on a game-high pace (23 points), scored eight points to cut into the Lady Wildcats’ lead. At intermission, Chinle had coasted to 26-20 lead.

The Lady Mustangs outpointed the Lady Wildcats, 10-7 to own the third quarter, reducing the Wildcats’ lead to three points, 33-30.

Begay scored, banked the ball twice and was forced out past the perimeter, where she then sank a three point basket to increase the Wildcats’ lead to 40-34. The Lady Wildcats and Mustangs scored 11 points each to end the final quarter, 51 to 45 final score, in Chinle’s favor.

“We had a good post-game from our bigs (Begay and Ashley), we had good ball movement, with the girls pounding the ball inside for scores,” said Lady Wildcat head coach Francine McCurtain.

“Stacey had a good game, overall, good team win, with other girls stepping up.”

Nez scored on five baskets in the lane, two three pointers and 100 percent from the free throw line (7/7) for a game high total of 23 points. Briana Gillis and Helen Salt contributed six points each.