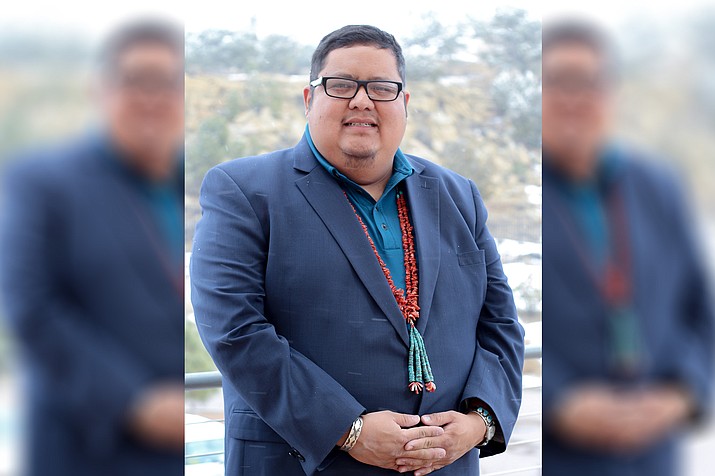 Seth Damon was elected as Speaker Pro Tem Jan. 15 by the delegates of the 24th Navajo Nation Council. (Photo/Office of the Speaker)

The council took its oath of office at noon during the 2019 Navajo Nation Inauguration at the Bee Holdzil Fighting Scouts Events Center in Fort Defiance, Arizona.

Following the inauguration event, the 24-member council convened for a special session to consider to select a speaker pro tem.

Through a simple majority vote by council members, Council Delegate Seth Damon (Bááháálí, Chichiltah, Manuelito, Tsé Lichíí’, Rock Springs, Tsayatoh) was selected as speaker pro tem and will serve on a temporary basis until a speaker is selected on the opening day of the 2019 Winter Council Session, Jan. 28. The speaker serves a two-year term.

Damon thanked his colleagues for supporting his nomination for the temporary speakership, and stressed that he would continue to carry out the administrative functions of the Legislative Branch and work with the Office of the President and Vice President and the Judicial Branch to address the needs of Navajo citizens.

“First, I would like to congratulate my colleagues on the 24th Navajo Nation Council, President Jonathan Nez, and Vice President Myron Lizer. It is important that we work together to move forward to continue serving the Navajo people during this transition, and I also want to thank our Navajo citizens for supporting our leadership at today’s inauguration,” Damon said.

Council Delegate Kee Allen Begay, Jr. (Low Mountain, Many Farms, Nazlini, Tachee/Blue Gap, Tselani/Cottonwood), who sponsored the legislation, said the bill was the first step to ensuring that the Legislative Branch’s functions and programs continue to operate during the transition into the 24th Navajo Nation Council.

“This legislation paved the way for a very productive Council, and I appreciate all the nominations made by my colleagues today. Through their vote, they showed their confidence in Delegate Damon to carry out the duties for the Legislative Branch,” Begay said. “I know he will take the appropriate actions to move forward the priorities of the 24th Navajo Nation Council.”

Begay congratulated President Jonathan Nez and Vice President Myron Lizer on the commencement of their terms today, and said despite the weather, the near-capacity attendance of Navajo citizens at the inauguration demonstrated confidence in the new administration. He added that statements made by leadership to work together hold true and can address issues facing the Nation such as road maintenance during the winter, the federal government shutdown and direct services to citizens.