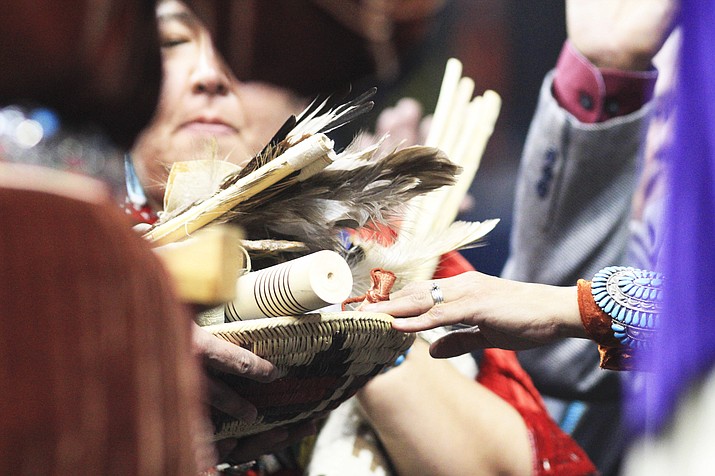 Members of the 24th Navajo Nation Council extend their hands as the oath of office is administered during the Navajo Nation inauguration Jan. 15 at Bee Holdzil Fighting Scouts Events Center in Fort Defiance, Arizona. (Loretta Yerian/NHO)

More than four thousand people joined Navajo Nation councilmembers, visiting dignitaries and members of the Navajo Nation in welcoming Nez as president, and listened closely as Nez addressed the Nation with words of hope and whispers of change.

Nez stated that throughout his campaign he was met with unique perspectives that brought a wide variety of matters to his attention. He said they all had one thing in common when it came to the Nation’s leadership and government — the need for change.

“Change presents opportunity — the opportunity to work together to strengthen and empower ourselves as individuals and as communities,” he said. “Along the way, we talked with many elderly, youth, single parents, working families, students, and many others seeking the change that we all deserve and desire. What I saw was hope. Despite the many challenges we face, our people still have hope — a hope for a better tomorrow for all of us as Diné people.”

To implement change Nez welcomed the 24th Navajo Nation Council, Navajo Nation Board of Education, Navajo Board of Election supervisors and Kayenta Township commissioners stating there were many new faces which helped reinforce the Nation’s desire for change.

“From the very start of the Nez-Lizer campaign, three words defined everything that our team did along the way, every step we took, and every word that we spoke. Those words are unity, hope, and resilience…. From day one, our campaign was about the Navajo people — not any one segment or any particular group of people with special interests, but all of our Navajo people united,” he said.

“You have the commitment of the Nez-Lizer administration that we will fight for you and advocate for you at every level of government. We will fight at the federal level for the reauthorization of the Violence Against Women Act through Congress to ensure that perpetrators who commit violent acts against our Native women are prosecuted to the fullest extent,” he said.

Additionally, Nez addressed the likely possibility of a 30-40 percent decrease in revenue on the Nation within the next several months with the closing of the Navajo Generating Station in Page. He asked the Nation to view this loss of revenue as an opportunity — a chance to review the way that business is conducted on the Nation. He asked the people to put their trust once again in the Nation’s leaders and reinforced that change would be a conduit of these challenges.

“As your president and vice president, we have challenged our division directors to develop a strategy that reduces wasteful spending, reduces duplication of services, and allow us to become more efficient and effective when it comes to operating our government,” Nez said. “We need to restore the people’s trust in government at the chapter level, regional level, and at the central level. We need to change, in order to have a government that our people can trust and that our people can believe in.”

A message to Navajo youth

Nez had a message to the youth of the Nation, stating that during his campaign he had the opportunity to hear from many Navajo youth, who sharing their joys and their hurts.

“We listened to many of their stories, both good and bad,” he said.

Nez spoke of the devastating effects of substance abuse, bullying, depression and suicide that youth are faced with, promising that he would continue to address these issues.

“To those young people who feel they have no hope or nothing to live for, you have the commitment of the Nez-Lizer team. We will work in the coming years to continue addressing these issues so that you have a better and brighter future for yourselves and your loved ones,” he said.

“If we want change in our communities and throughout our Nation, change has to start from within ourselves as individuals, but some of our people need help doing that,” he added.

As Nez wrapped up his inaugural address he looked to his colleagues, returning to the hope of change and the challenges the Nation’s leadership could face if they do not work together.

“I think we all know that our people are tired of the squabbling and differences that stall progress and create animosity among our Nation’s leaders,” he said. “You have our commitment that we will work hand in hand with you to create change for our people and to move issues forward. To our leaders in Congress, at the state level, county level, and chapter levels, we look forward to working with all of you to resolve and advance the issues of the Navajo Nation including water rights, health and wellness, education, land issues, public safety, infrastructure development, and many others.”