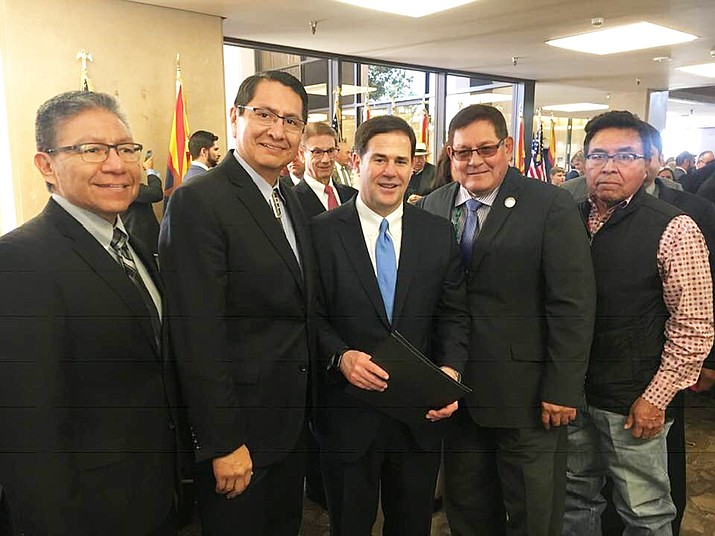 “Working together, the Nez-Lizer administration looks forward to meeting with Arizona leadership and the cabinet members to create a better and more prosperous future for the Navajo people and the State of Arizona,” Nez said. “We have to work together and across party lines to tackle a lot of tough issues and we are prepared to hit the ground running when we take office.”

In his address, Ducey listed the securing of the state’s water future as one his administration’s top priorities, along with public safety, increased funding for K-12 education and combatting drug smuggling.

“For years, the Navajo Nation has been working toward a fair water settlement with the State of Arizona. It’s good to hear that Governor Ducey is focused on water issues, but it’s very important that he and his cabinet members include the Navajo Nation in water discussions so that we have a voice at the table,” Nez said.

As a business owner on the Navajo Nation, Lizer said he would like to discuss economic opportunities at the state level that may assist Navajo entrepreneurs who want to start their own business and create jobs and revenue for the Nation.

“We have many talented and intelligent Navajo entrepreneurs that just need a little help in one way or another and that’s something that the state of Arizona may be able to partner with us on. Through our administration, we will continue to promote the notion of ‘Buy Navajo, Buy Local’ to keep our dollars on the Navajo Nation,” Lizer said.

Nez and Lizer said they look forward to the opportunity to work with all leaders at the state level to create change and opportunities to strengthen the partnership between the Navajo Nation and the State of Arizona.

“The Navajo people put us in office to bring change for the benefit of all Navajo people and that’s going to be our driving force when we take office,” Nez added.

Ducey begins his second four-year term as governor after being re-elected in the general election Nov. 6.

Information provided by the Office of the President