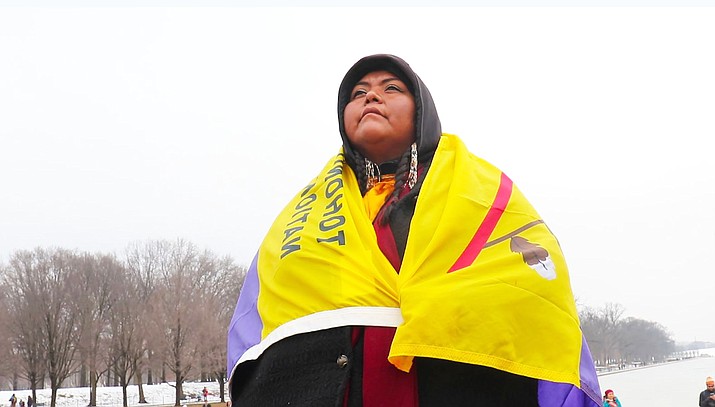 WASHINGTON — Nataanii Means spent part of his childhood on the Navajo Nation with little electricity or running water, while energy companies mined coal and uranium nearby.

He said those operations left the water polluted and undrinkable.

Nataanii Means, who spent part of his childhood in the Navajo Nation, gets a hug from a friend near the Lincoln Memorial at the first-ever Indigenous Peoples March. (Photo/Keerthi Vedantam, Cronkite News)

Means brought that experience to the Indigenous Peoples March in Washington Jan. 18, where he heard the same story with different roots: People from South Dakota, Minnesota and Washington talked of pollution caused by mining or leaking oil pipelines on their reservations.

“It’s our duty as indigenous people to … be conscious of what’s happening in the world,” said Means, who now lives in northern Minnesota where he fights against a proposed pipeline. “To be a protector.”

The first-ever Indigenous Peoples March brought thousands from all over the country and from as far away as Australia and the Caribbean to raise awareness of a number of issues: violence against indigenous people on and off reservations, environmental regulation, safety for women and the border wall.

“It was just time,” said Kelly Holmes, a march organizer from Denver. “We were all rallying locally about the same issues so we decided to come together.”

The march was at once a solemn affair recognizing ongoing hardships of Native Americans as well as a celebration of defiance and activism. It began in front of the Interior Department, where many agencies serving Indian Country are currently part of the government shutdown, and ended at the Lincoln Memorial where activists from around the country took the stage to share stories and offer resources.

During the march, parents and relatives held signs of loved ones who have been missing for months and years. Others sported #NoDAPL banners in reference to 2016 protests against the Dakota Access Pipeline, a planned oil pipeline that crosses tribal land as it carries crude oil from Canada to Louisiana.

Jingle dancers maneuvered through the crowd to the beat of drums and traditional songs. People wore everything from traditional dresses to Patagonia jackets and shared stories about going to Standing Rock — home of the Dakota Access Pipeline protests — about traveling to Washington and about how woefully under- or over-prepared they were for the cold and snow.

Emma Robbins, a Navajo woman who splits her time between the reservation and Los Angeles, said it was important to have a place where Native Americans could come together.

“We are all going through the same issues, all over the country,” said Robbins, who works to bring running water to the reservation. “Being around people who understand each other is amazing.”

Amy Juan marched with a bright yellow Tohono O’odham flag draped around her shoulders. She came to Washington to protest the president’s proposed border wall with Mexico, which would cut through the reservation.

Tribal members who live on the Mexican side of the reservation have difficulty crossing the border for tribal events or healthcare services, Juan said. Even driving through checkpoints to get groceries or go to the movies has made her more stressed.

“Just imagine: In order to leave your neighborhood or your community, having to go through checkpoints with armed agents,” she said. “There are children who are traumatized each time they go through the checkpoints.”

Juan compares it to the situation around the Dakota Access Pipeline construction.

“To have strangers that close to your land is so difficult,” she said.

Though the march is not about one specific issue, Holmes said it is about the larger goal of bringing people together to come up with universal solutions.

“It’s about, how can we fix this ourselves?” she said. “We need to be part of that conversation.”