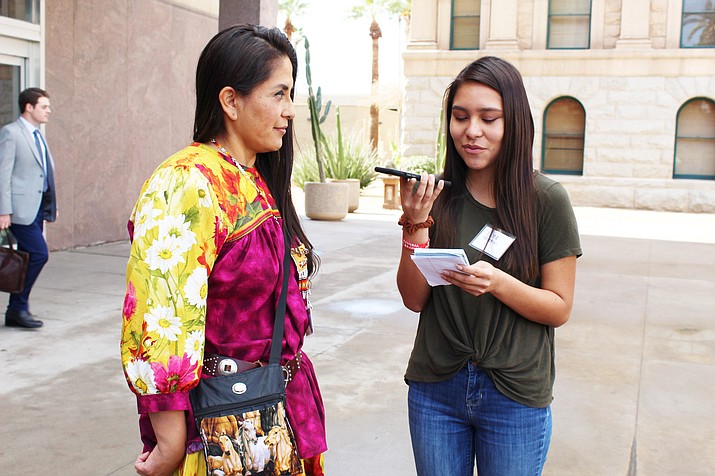 “Hope is rising among our people and the state of Arizona,” Lee-Gatewood said. “The more we join shoulder to shoulder, the more hope rises.”

Lee-Gatewood said tribal voices need to be included, whether it’s water or education.

“We are a part of Arizona. We have the same aspirations as you. We want a quality of life,” she said. “We have a responsibility to enrich that. We have an obligation to work for the good of all. We believe that if we work together we will see hope rise again.”

Chairwoman Lee-Gatewood said the legislature passes laws that help people who aren’t born yet. She spoke about how the tribe has endured struggles, but has been able to withstand the pulls of life’s laws and policies.

“We have adapted from wikiups to homes,” she said. “We are progressing. We never forget that our people were forced to remain on reservations. We were forced to live on rations.

Lee-Gatewood spoke about how the tribal members were forbidden sometimes to speak their language, but now has an initiative to bring back their language. She said their language makes them unique and has a profound impact on their children.

“This has been our homeland since time immemorial,’ she said. “We are part of nature. We are tied to the land and we never forget it.”

The White Mountain Apache Reservation has 1.6 million acres including the headwaters of the Salt River. She said her homeland is blessed with the four seasons because it brings white river rafting, elk, flowers and skiing.

“We have a 60 mile pipeline that flows south and we share that water with you,” she said.

Lee-Gatewood said the tribe has built a relationship with the state and Arizona communities regarding water rights and other issues.

“We are proud of our relationship with downstream uses,” she said.

Lee-Gatewood said the tribe’s casino has given $94 million to the state and Arizona communities through its Indian gaming program.

“We show compassion as good neighbors. It’s reassuring that we work together,” she said.

Lee-Gatewood is the first White Mountain Apache Tribal female leader. She said she dresses like her mother ,whom she is proud of.

“I can hear her in the back of my mind telling me to be humble and remember where I come from,” she said.

Hualapai Chairman Damon Clarke, who has worked in education for several decades, said he is dedicated to helping students with the idea that each child can achieve to his or her capacity. He said it’s easy to talk about issues, but harder to solve them in this world of drugs and alcohol, poverty and budget cuts.

“Our problem is access to water,” he said. “We have been working on water rights for more than a decade, but we have more work to do.”

Clarke said Peach Springs Elementary School has a history of problems with the quality of education. He urged the state to help. He said the students at Peach Springs Elementary School have poor test scores in every area. He said the Hualapai Tribe has a strong day care program for those up to six years old. He said it’s proven that when culture is part of the students’ education, they perform better in school.

“If students have a strong foundation they know who they are. We need to support our youth, but that also means supporting parents and grandparents,” he said.

Clarke said the 22 tribes in Arizona have the same issues — they need free college education and access to water.

“We want to thrive and be self-sufficient,” he said. “We want the best for our children. We want you to come see us.”

Robert Miguel, chairman of the Ak-Chin Indian Community, said the Ak-Chin Reservation is 22,000 acres with 15,000 acres of farming. The Ak-Chin grow potatoes, alfalfa and pecans. They sell about $1 million of pecans to China each year.

The farms also have one million chickens bringing eggs to the Southwest.

Miguel said the Ak Chin have been successful in some areas, thanks to the leaders who came before them. He was raised by his grandparents and his grandfather was Jones Miguel, who was a former chairman. Miguel said his grandfather instilled him with the necessary values.

Miguel spoke about the positive actions that have been taken because of funds from Indian gaming. One was personal. His daughter was able to have an operation to take care of her cleft palate. The large screen in back of him showed the before and after photos drawing a strong emotional reaction from the audience.

“These funds provide toward things we never imagined,” he said. “The state needs to know we can be key players. We are here to support each other.”

The Ak Chin have used the casino funds to build a bowling alley, movie theater and golf course. They have also contributed $1 million to the state of Arizona.

“We are here to help you help us help you. The foundation is here. It is up to you how you want to proceed,” he told the state legislators.

Miguel also spoke out against domestic violence, recounting how he saw his mother beaten when he was 8 years old.

“I was in the corner hurt and sad,” he said.

Miguel jumped on his bike and rode 20 miles to the Ak Chin Reservation where he told people what happened. He said this incident encouraged him to become a tribal leader so he could help people.

“I will never accept anyone who hits a female. That is what I teach my children,” he said. “Use what you go through to inspire you. It’s up to you to take it and run with it.”

Miguel said the Ak Chin Tribe is self-sufficient, but that doesn’t mean the government shouldn’t live up to its trust responsibility.

“We are powerful and we will only get stronger. We leave this for the youth,” he said.

Arizona State Sen. Jamescita Peshlakai urged the tribal leaders to come down to talk with their legislators’ more than just on Tribal Legislative Day. She apologized for some state senators who did not attend the event.

Senate President Fann thanked the tribal leaders for making the long drive to attend the event and she spoke with several of them before the event about their priorities.

Speaker of the House Bowers thanked the tribal leaders for participating adding that the cultural and economic impact from the tribes has been immense.

“Thank you for your sense of place,” he told the tribal leaders.