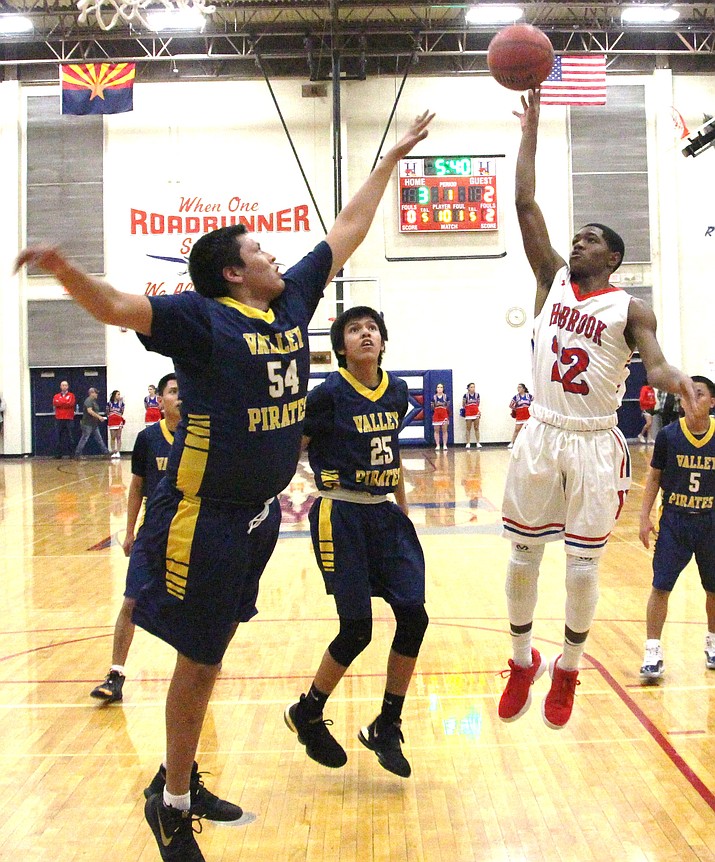 Holbrook Roadrunners’ Jeffery Jones attempts a jump shot over Valley Pirates Marcellue Barney and Tristan Store (25), in a non-sectional game, at the Tony Munoz Gym in Holbrook, Ariz. Holbrook won the contest, 70 to 39 over the Valley Pirates. (Anton Wero/NHO)

“They are known for shooting a lot of threes and making them, they are a good team,” said head coach Delmar Johnson. “We have to defend them and gave up a lot of threes, we have to pressure them full court.” 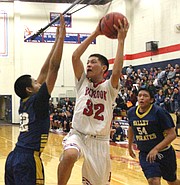 Valley Sanders coach Zachary Button had a similar observation about the Roadrunners.

“They are very good, fast team, a great shooting team — we have to take away their outside shot and match up with them, offensively and defensively,” he said.

Holbrook’s Kobi Koerperich connected on two threes in the opening minutes of the first period plus two driving layups, leading to a 17-point first period start and limiting Valley Pirates to 12 points.

Offensively, a solid start for the Roadrunners taking a lead they didn’t relinquishment for the rest of the contest.

After the break, the Roadrunners continued to add to their lead with a huge offensive quarter, aided by Josiah Freddie 10 points. Blayne Nelson connecting on his third three point basket of the night and Koerperich was fouled attempting a trey and made three free throws, which all led to a 25-point third quarter spurted. The score was 59-31.

Holbrook’s second half offensive rally in third period led to clearing of the benches and most of the packed house.

Holbrook Roadrunners’ nonstarters concluded the game with 11-8 final quarter and score of 70-39 in their favor.

“We played as a unit, moving the ball and sharing the ball,” Delmar said. “They (Roadrunners) played hard, this game gives more confidence for the second half of our season.”

Speaking of sharing, Koerperich and Freddie shared the game high honors with 22 points each for the Roadrunners.

Holbrook Lady Roadrunners and Valley Lady Pirates had a slow start, with Holbrook out to a two point advantage 10-8.

The Pirates’ Dana Yazzie, Kiana Nez and Valiyah Yazzie hit 3 baskets from outside the arc to reclaim the lead in the second quarter and led 22 -19 going into the break.

“Valley’s main offense is the 3-point basket and we didn’t defend the it well in the first half,” said Holbrook head coach Greg Perkins. “So we talked pressuring the outside shooting in the locker room.”

With the change in defense, Holbrook limited the Valley Pirates to only one three-pointer and Holbrook’s Desirae Bain hit her second three pointer of the game, cutting into the Pirates lead to four points, 33-29, at the conclusion of the third quarter.

Holbrook Roadrunners’ full court pressure led to gaining control of the game as the visiting Pirates were held to a single basket, while the host Roadrunners combined for a huge 15 point final quarter that led to a 44-35 final score for the Holbrook Roadrunners.

“We didn’t defend them well in the first half,” Perkins said. “We played better defends in the second half and that was the difference.”

Matehya Aberle scored a game high 14 points for the Roadrunners followed by Madison Chappell with 12 points.

Dana Yazzie and Valiyah Yazzie scored a team high 10 points each for the Valley Sanders Pirates.