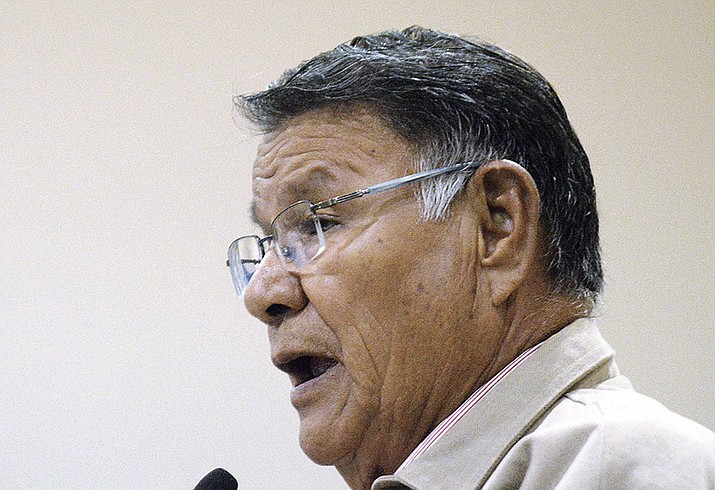 Bluehouse died the morning of Jan. 14, weeks after doctors discovered he had late-stage cancer, said his son, Milton Bluehouse Jr. He was 82.

Within months, the Navajo Nation Council removed Atcitty for accepting free trips and golf games from companies doing business with the tribe.

Bluehouse was known for his skills as an orator in the Navajo language, ensuring the federal government upheld its obligation to the tribe and maintaining traditional values.

“Mr. Bluehouse was always open-minded,” said Willie Tracey Jr., the manager of the Ganado Chapter where Bluehouse was registered. “He was a caring person (in) what he talked about, what he planned for, what he wanted to do. He always had people in mind. He was a good advocate in doing what he could through his leadership”

In his short time as president, Bluehouse outlined an ambitious plan to offer physical training for at-risk youth, create 2,000 jobs in two years and expand policing and community-based prevention programs.

“I’m not about to roll over and play dead just because some people may think I only have four months,” he said.

Bluehouse sought the presidency as a write-in candidate in November 1998, but finished in third place.

He was raised in a traditional Navajo lifestyle that included sheep herding and graduated from the Ganado Mission School in 1958. He then served three years in the U.S. Army.

Bluehouse’s career included consulting and advocacy work. He represented Ganado on the Tribal Council before he served in the tribe’s top elected office. He lost a bid in 2010 to recapture the council seat.

He challenged the Tribal Council when it attempted to use a loan to build a casino and led an effort to recall former Navajo President Ben Shelly over his administration’s support of a settlement for water rights in the Little Colorado River basin in more recent years.

“Honorable Milton Bluehouse, Sr. was a great leader for the Navajo Nation and he will be greatly missed,” said Tribal Council Speaker LoRenzo Bates. “He was a strong advocate for many issues, especially for upholding and protecting the sovereignty of the Navajo people.”

Within his own family, Bluehouse was a mentor and teacher who brought his children to community meetings. He would wake them up before the sun rose to check on the livestock and get hay for the animals, Bluehouse Jr. said.

“Those were moments when he taught us how to work hard and to learn from hardship for things that come up in life like this,” Bluehouse Jr. said.

He said his father also had been suffering from Alzheimer’s disease but kept his sense of humor.