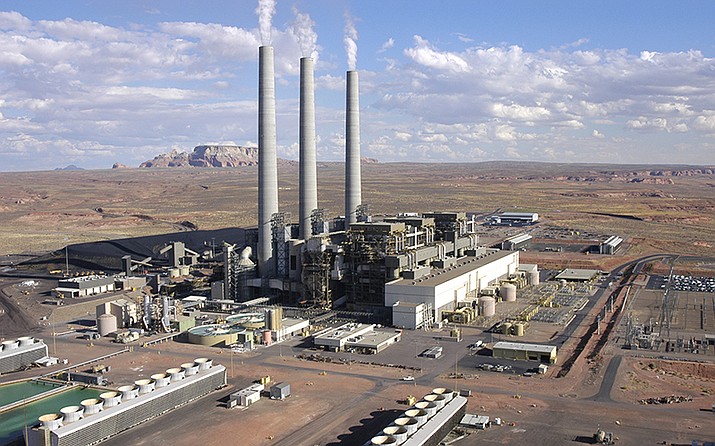 The coal-fired Navajo Generating Station provides almost 1,000 jobs between the plant and the mine that supplies it, but the plant’s operators plan to shut it down in December 2019. (Photo by Amber Brown/Courtesy SRP)

FLAGSTAFF, Ariz. (AP) — A Navajo Nation energy company studying the purchase of a coal-fired power plant on the reservation says it’s looking into the mine that supplies it, too.

The tribal government asked the Navajo Transitional Energy Company in October to look into acquiring the Navajo Generating Station near Page along the Arizona-Utah border. Its owners are closing it in December, citing cheaper power from natural gas.

The energy company says it wants to keep the plant and Kayenta Mine open for at least another 10 years to preserve hundreds of jobs held mostly by Navajos, as well as the revenue. The company’s board met recently and said it would pursue both.

“NTEC is not going lightly into this venture, I assure you that,” the company’s chief executive, Clark Moseley, told tribal lawmakers in late December.

The company was created to buy a coal mine in northwestern New Mexico and owns a 7 percent stake in the nearby Four Corners Power Plant. Moseley said that experience will help the company clear what had been a major hurdle for other companies that pulled out of negotiations for the Navajo Generating Station last year — finding someone to buy the power.

Utilities increasingly are moving away from coal as a power source. Moseley cited preliminary findings in saying entities are interested, but he didn’t name any.

NTEC spokesman Erny Zah said the company could not go into details yet about power sales or the costs of acquiring the mine and power plant because of non-disclosure agreements.

Peabody Energy owns the Kayenta Mine and had launched a long-shot bid to find a new buyer for the power plant to sustain its own business. Peabody said Jan. 7 it supports continued operation of the mine but didn’t respond to specific questions about a potential sale or whether it would operate the mine under tribal ownership.

No agreements have been reached, Zah said.

The Navajo Nation relies heavily on the coal industry for revenue. Incoming tribal President Jonathan Nez and new lawmakers, who will be sworn this week, will have a say in whether the tribe owns the power plant and mine.

Dozens of people protested the possibility last week at a special session of the Navajo Nation Council. Nadine Narindrankura, who lives about 30 miles (50 kilometers) from the Kayenta Mine, helped organize the protest. She said she’s fearful Peabody is trying to push its responsibilities for restoring the land to pre-mining conditions and making up for the water used in mining operations onto someone else.

She and other environmentalists have advocated for the tribe to focus instead on renewable energy.

“In order to change things we really have to make this shift happen where our economies are diversified and we’re not relying on things that destroy our subsistence from the land,” she said.