The family's secret is out: Harry Houdini's relatives live in northern Arizona 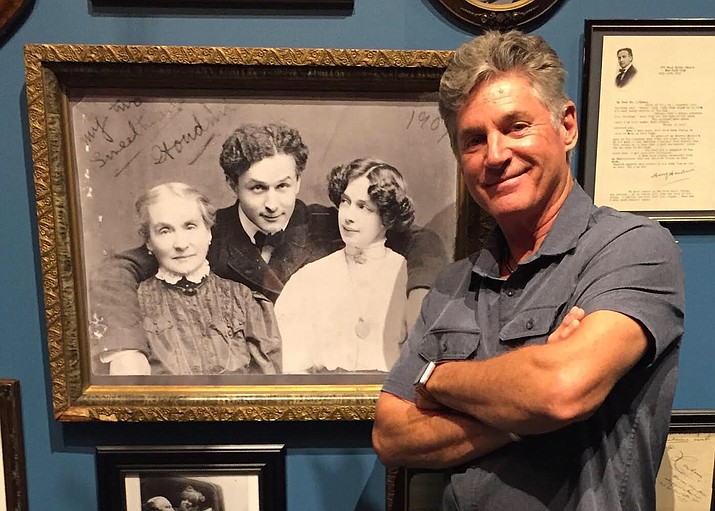 George Hardeen stands next to a photo of his grandmother Cecelia Weisz and great uncle Harry Houdini. (Photo/Lee Terbosic via George Hardeen)

FLAGSTAFF, Ariz. — Harry Houdini’s great grand-nephew, a long-time resident of the Navajo Nation, has a new program on the Science Channel.

The show, called “Houdini’s Last Secrets,” started airing on the Science Channel Jan. 6 and will have four episodes. The show involves Hardeen looking into family history and figuring out the secrets behind how Houdini did his most iconic tricks with Lee Terbosic, who is a magician as well and Steve Wolf, who is a builder and stunt coordinator.

Hardeen, who lives in Page, Arizona and whose children live in Flagstaff, Arizona said he has known about his connection to Houdini since he was about 9 or 10 years old. Hardeen’s grandfather’s (Theo Hardeen) brother, was Harry Houdini.

George Hardeen, who works on the Navajo Nation near Page, Arizona recently revealed he is the great nephew of Harry Houdini. (Photo/submitted by George Hardeen)

“They were partners, ever since they were kids, until Houdini until he got married and then his wife became his partner,” Hardeen said. “My grandfather continued his magic act. What is not reported in the TV show is that they competed against each other cooperatively. To the public they were competing magicians. The public, at that point, didn’t even realize they were brothers.”

Hardeen said that Houdini fascinates people and most people know who he is even though he died on Halloween in 1926.

“Somehow Houdini’s name and the legend have remained alive throughout time,” Hardeen said.

Throughout the years, despite being contacted often, Hardeen generally has not answered all the phone calls and inquiries about Houdini, but now, he finds he is having fun.

Some of the tricks that the show will look at are the water torture cell, which Hardeen said Houdini called the upside down. He would hang upside down, lowered into a tank of water. He would be hanging from stocks that would sit on top of the cell and they would be padlocked.

“Sometimes it would take him hours, with fainting in the audience,” Hardeen said. “Obviously, he was an illusionist.”

There is also the bullet catch and some history on the controversy of whether Houdini actually performed the trick.

“Because it was so dangerous and actually killed one of Houdini’s friends…,” Hardeens said.

They also do one called, buried alive.

“Houdini did buried alive one time in California and he almost died,” Hardeen said.

The show’s producers, Hardeen, Terbosic and Wolf had to reinvent some of the tricks themselves and make sure they worked and that Terbosic could escape from them.

Hardeen stresses that everyone involved in the show did not know how Houdini actually escaped from his illusions.

“We are looking at his apparatus and redesigning it ourselves,” Hardeen said. “We know this for certain, Houdini’s stuff was far, far more elaborate. He had his water torture cell built to his specifications in England. He paid $10,000 for it in around 1910.”

Hardeen said it was built like a piece of fine furniture and nobody except his assistants got to see or handle the stocks where his feet went.

“There is where the secret is, of course,” Hardeen said. “We didn’t have that, that was destroyed in the fire, it didn’t exist. We had to figure it out ourselves, how could our magician escape. Houdini’s secrets can’t be revealed because only Houdini knows what they are.”

The question still remains, how did Houdini escape from all the tricks that he attempted?

“He was like a kid who would take the radios apart to figure out how things worked,” Hardeen said. “He was a master at sleight of hand. In his early career he was known as the King of Cards, he would do card tricks. It was only later in life that he became an … escapologist.” 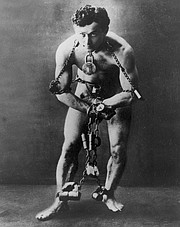 Escape artist Harry Houdini is shown in chains in this photo circa 1899. (AP Photo)

Houdini rolled coins on his fingers to keep his fingers nimble. He ran 10 miles a day and went to the local YMCA to work out.

“He had to train himself, his body, like a prize fighter because of the stresses he was putting on himself,” Hardeen said. “The metal from the handcuffs eating into his skin. He had to hold his breath for long periods of time. Jumping into cold rivers. He took great care of himself, because he had to.”

Hardeen said when Houdini died at age 52, he looked pretty old because of those stresses.

Hardeen said that because of the show, he has learned a lot about Houdini, more than even his father had told him, because of collectors and others who know more about Houdini than Hardeen would ever know.

Hardeen likes to say, Houdini, a Hungarian, who moved to the U.S. as a child, invented public relations.

“He would go the newspapers in the city he was visiting and say, ‘I will get into a straightjacket and you can hang me from your flagpole and I will hanging upside down and get out of the straightjacket,’” Hardeen said. “Of course, the newspapers thought that was great and that meant they were going to cover it and before they did, they would advertise it.”

Houdini saved every newspaper article he could find about himself and compiled 160 scrapbooks that now reside in the Library of Congress. Hardeen and his daughter, Shonie, went to see them in June.

Shonie told the Associated Press that the show has increased her interest in the dad’s family and Houdini.

“Some people are from somewhere in Europe and they can’t pinpoint it,” she said. “I guess it’s easier for my family to figure out stuff because he’s been written about for so long.”